Ed and Mary Lorentz purchased Cannon Falls, Minn.-based Lorentz Meats in 1968 and operated it as a custom exempt locker plant working for farmers and stamping everything “not for sale,” until 1997 when they sold the plant and a deli to their sons Mike and Rob.

Today, small-niche processing plants are experiencing popularity and growth they haven’t seen in the past. Chief executive officer of Lorentz Meats, Mike Lorentz said the small meat plant saw darker days before he and his brother took over the plant.

“Through the ‘80s when all our farmers went broke, we had the retail store, we did catering, we did deli, we tried to cobble together a living,” Lorentz said. “So, it’s fun to see the opportunities that are available for small businesses right now compared to what it was in the ‘80s and what it was in the early 2000s, it’s a really interesting time.”

Lorentz refers to the small, niche processing business as a lifestyle business. He likens it to being a plumber with their own small business, or an independent mechanic with a shop. Small businesses allow tradesmen, including small meat processors and cutters to employ local people and feed their families.

“There’s quite a few of those and it’s an honorable trade and it’s an honorable existence, but they are just that,” Lorentz said. “They’re lifestyle businesses and they’re not really going to move the needle on meat consumption or high-attribute meat consumption. But they are going to serve their community and they are going to serve their circle of farmers and rural economic development because they’re going to pay some taxes and pay some employees and the farmers are going to get a little extra margin. It’s just a nice thing, but it’s hard work. It’s hard to make money. It’s hard to make it go.”

In addition to the hard work, small processors face a number of challenges unique to their place in the meat processing sphere. While the big commodity processors buy large lots of animals knowing they have multiple programs with a wide array of products for carcasses that don’t hit the mark, the niche processor must buy right because there aren’t those offshoot programs.

“There’s just not enough volume in the primary program to have program B, C and D for the outliers,” Lorentz said. “So really it starts with the buy, it’s the first challenge, and then the second challenge is our fabrication area has to do more knife work to amend that buy variance down to a standard product.”

Lorentz Meats sometimes finds itself adjusting activity on the fabrication floor on the fly. If there’s a marbling spec, for example, that an animal doesn’t meet and there’s no market for the underperforming middle, the whole animal will need to be boned out.

“It changes the knife work that we have to do,” Lorentz said. “It’s not like the commodity guys where they’re pretty straight forward that they’re going to do a specific amount of knife work to get that cow or hog through the building. We might have to do a different degree of knife work.” 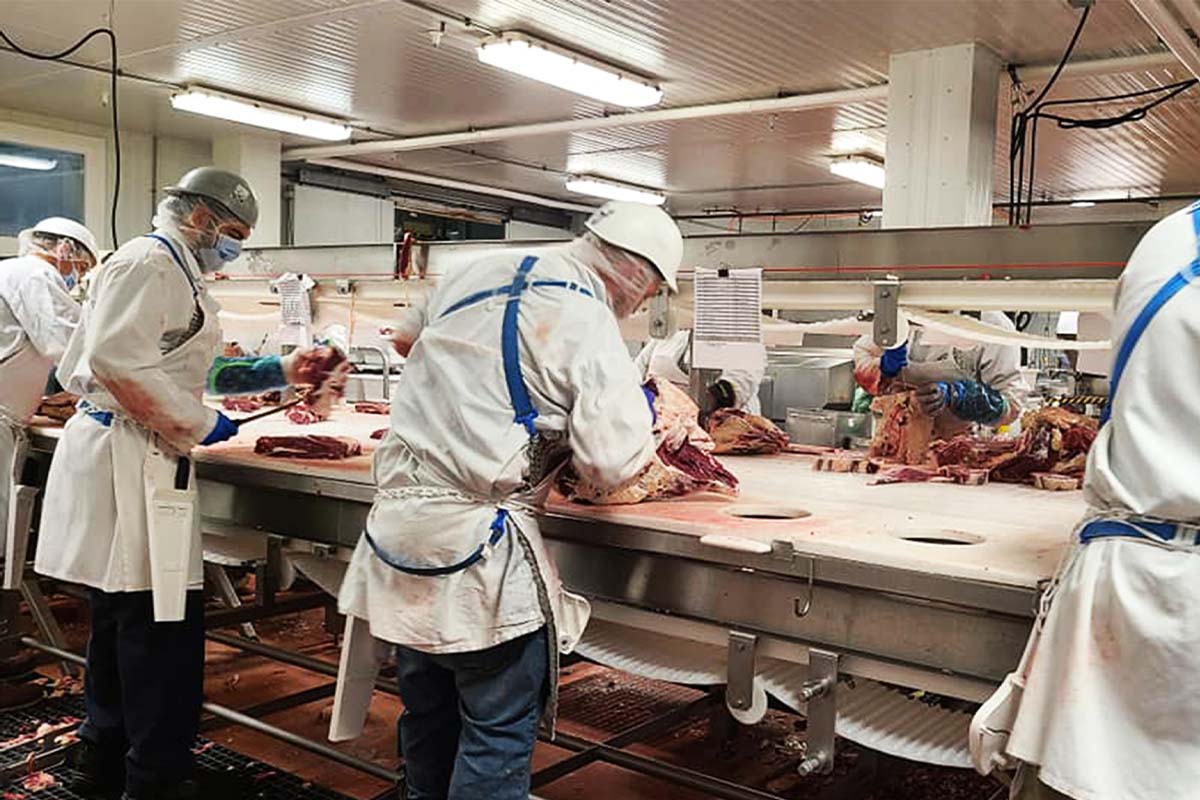 The link the companies share goes deeper and strengthens beyond that, though. The facilities operate as independent businesses. The owners view themselves as co-packers only with no Lorentz Meats or Vermont Packing House brands.

“We are strictly a toll processor at both facilities,” Lorentz said. “Ironically, in Minnesota, Organic Meat Co., which is one of the owners is one of our primary customers, and in Vermont, Walden is the largest customer of Vermont Packing House. But we have separated the owner function from the operations function. In both instances, that owner acts like a customer to that company.”

The Lorentz facility in Cannon Falls covers approximately 50,000 square feet and processes about 100 head of beef or bison a day with 140 employees. Vermont Packing is about 40,000 square feet but has room to expand within the building. Daily production is the equivalent of 50 head of beef or 120 pigs, depending on the day, with about 70 employees.

Lorentz Meats can fabricate beef and make sausage at the same time, so it runs two sausage making and specialty packaging shifts and one kill and fab, Vermont Packing runs one shift. Lorentz contracts a third-party company for sanitation on third shift and Vermont Packing does its own on second shift.

Both companies have diverse customer bases that include retail and foodservice, but in different proportions. Lorentz Meats’ customers are predominantly retail with some small foodservice accounts, while Vermont Packing House services mostly foodservice and direct to consumer with a smaller percentage of retail.

The difference in channels is not intentional, but more a reflection of geographical areas and populations. In Minnesota, Lorentz Meats operates in the midst of more agriculture-based production with a plant twice the size of Vermont Packing House. The larger volume in Minnesota provides easier access to retail business.

“I think Vermont is so small in animal agriculture, that it’s just dominated by these really small programs,” Lorentz said. “So, it tends to be not suitable for larger retailers. Then when you look at Vermont and the northeast in general, the population tends to be smaller with smaller stores, and it tends to have a lot of tourists, so foodservice is popular. It’s just a different part of the country.”

Lorentz referred to a 2013 book by Oregon State University professor in the Department of Crop and Soil Science, Lauren Gwin, titled “Local Meat and Poultry Processing: The Importance of Business Commitments for Long-Term Viability,” when describing what small plants must do to realize success and maintain longevity.

Small-plant processing relies heavily on committed relationships from both customers and suppliers. Because margins tend to be thin in the processing industry, especially for small to medium-size facilities, steady work is essential to ensure success.

“You take the revenue they get divided by the hours that they worked, and it doesn’t look like a plumber or a mechanic that gets $150 an hour,” Lorentz said. “It’s like tens of dollars an hour. So, to make that work, you have got to work all the time, you can’t have any gaps.”

The ownerships of Lorentz Meats and Vermont Packing House plan to add partners, grow the network and expand processing capacity. While they’re always looking for potential partners and places, Lorentz said it takes a while to develop and there are variables that can be weighted differently.

“We’re looking for the right region with the right mix of livestock and sales opportunities and all that,” Lorentz said. “It’s a little bit just turning over some stones to look at opportunities, and we have a very soft equation of what things we value. So, you can have different values in each component of that equation.”