Over the past 25-plus years, Nicole Johnson-Hoffman’s career has exposed her to many different aspects of the food industry, from the courtroom to the boardroom to the slaughter room floor. It even landed her on the stage of “The Oprah Winfrey Show.” But, as of this past February, the longtime leader of multiple meat companies and high-profile champion of the beef industry has assumed the chief executive officer role with a promising alternative meat company, Rehovot, Israel-based Future Meat Technologies.

Future Meat’s proprietary technology creates cultivated meat directly from animal cells without the need to slaughter animals. Its technology is based on the rapid natural proliferation of connective tissue cells growing in stainless steel fermenters that continuously remove waste products to maintain a constant physiological environment. Unlike many other cultured meat startups, Future Meat’s connective tissue method is more cost-efficient than using stem cells, according to Yaakov Nahmias, founder and president. In the past year, the company has raised more than $350 million in financing, including funding from Tyson Foods’ venture capital arm.

Johnson-Hoffman’s unconventional career path has also taken her all over the world. Her position with Future Meat has her working at the company’s office and pilot plant in Tel Aviv, Israel, seemingly a world away from the small farm she grew up on in Minnesota. Since its founding in 2018, Future Meat has grown to 60 employees. The collective focus is to first bring cultivated chicken to the US market in the foodservice segment. The team has made progress on scaling its products in a short time, producing cultivated chicken breast at a cost that is hovering around $7.70 per lb compared to $18 per lb less than a year ago.

Johnson-Hoffman said there is a buzz resonating throughout the company as it grows and makes plans to build and open the first of many production facilities in the United States, which will break ground in the next year.

“I was really excited about the opportunity to be part of something that is so future oriented; that is not just about today. And it’s not even about next week, but it is really about six months from now, a year from now and two years from now - and then also 10 years from now,” she said. “It’s a whole new way of working for somebody [like me] who’s used to working in the really urgent, ‘now’ of the animal protein business. I love that aspect of it.

“I love the idea that the work we’re doing will pay dividends for generations to come,” she said, “that we’re laying a foundation for entire new ways of producing food for people around the world, and that those technologies and products will find uses that we can only dream of today. It is an exciting time to be a part of the Future Meat team.”

After graduating from college, Johnson-Hoffman went on to complete law school in 1998. But beyond that, she didn’t have a concrete plan of what would come next.

“I didn’t have a really clear vision for what I would do after law school,” she said.

Fortunately, she was recruited by Cargill to join its in-house law department while still attending law school and began her career there after graduating.

“I knew that I wanted to study law, I loved it. I loved law school and I loved being an attorney.”

She went on to work in the company’s financial services business before transitioning to operations in 2008, working as the general manager at Cargill’s Fort Morgan, Colo. beef plant, a progression that likely surprised many of her industry contemporaries.

“I’m a good example of somebody who benefited from a company’s willingness to develop people across multiple job skills and allow people to have varied careers that really allow you to learn the broad base of the business.”

Making the transition from a corporate role to working in the trenches at a high-volume beef plant was not a traditional career progression.

“I think the people who knew me well did not find it terribly surprising that I would be up for some kind of new challenge like that,” Johnson-Hoffman said. “And the people who knew Cargill well knew that Cargill was interested in diverse talent and was interested in non-traditional career paths. But to observers outside of Cargill maybe more traditional industry participants or to people who didn’t know me well, I think it was a real jaw dropper.”

“It was thrilling,” she added. “I loved working in the factory in Colorado, the opportunity to run a beef plant is something that I still can’t believe Cargill granted me. It was a fantastic group of people who were passionately engaged in the work they did and who were doing their best to make a great place to work and to produce really high quality, safe food in conditions that can be extremely challenging.”

While still working at Cargill, she became involved in the Global Roundtable for Sustainable Beef (GRSB), serving on its board beginning in 2013 and continuing in that role for eight years. She also served as an early leader of the US Roundtable for Sustainable Beef, serving as the founding chairperson in 2015. Sustainability and transparency were priorities for Cargill and Johnson-Hoffman carried that torch for her company and for the entire beef industry. She said the efforts of the GRSB and its US-based faction has shifted the mindset of industry stakeholders.

“There’s been a real evolution in thinking in traditional animal protein over the years,” she said, “to the point that today I think it is well understood that trust in animal protein is a really important thing for us all to be working on.

“The sustainability work has given us new ways to talk about our commitments in the food business. And it’s given us some common language that we lacked before. It’s also helped us to create new incentives and motivations for people to do work that is hard, to improve the sustainability of food production in the US and around the world.” 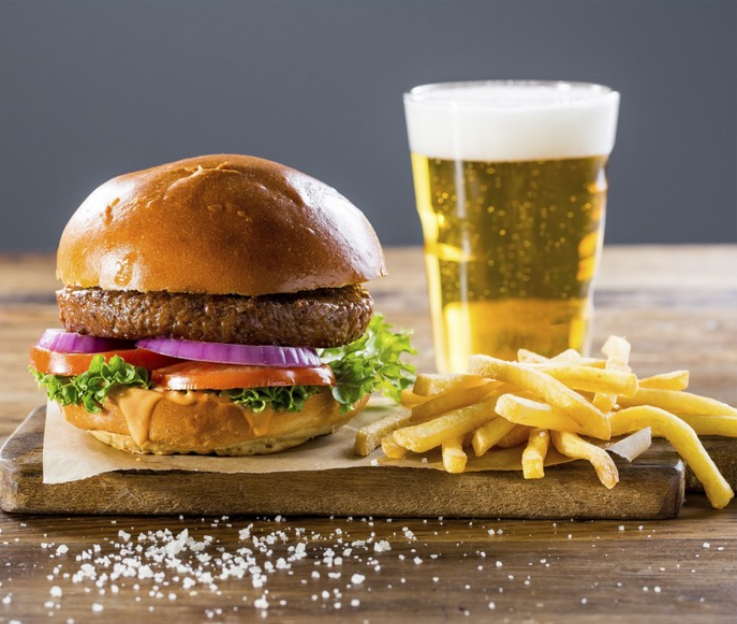 Officials with Future Meat contend their company is part of the meat industry, unlike plant-based companies, because its products are cultivated from the cells of live animals.

After leaving Cargill in 2016, Johnson-Hoffman went to work for OSI, where she was based in Aurora, Ill., and oversaw the company’s business segment that supplied beef to McDonald’s Corp. She ended her five-plus-year tenure with OSI working for a year in Gersthofen, Bavaria, Germany, managing its processed foods business, which included responsibility for nine further processing plants located across Europe. During her time at OSI her oversight of production included traditional proteins as well as working in partnership with alternative protein companies to make vegetable-based products.

She admired OSI’s diversified, entrepreneurial business strategy and the hands-on approach of its entire hardworking team.

“Like everyone, I have watched the rise in interest of these new alternative protein products, and I’ve tried them myself,” she said. “Some of them I loved some of them I didn’t love.”

She said it didn’t take long for her to recognize that companies making plant-based meat alternatives share some of the same goals as companies that make traditional, animal-derived meats, including the need to be transparent and sustainable so consumers can eat those foods with confidence. Johnson-Hoffman said she has also stayed abreast of the development of cultured meat products over the years.

“I watched the rise of cultured meats with a whole lot of skepticism,” she said.

Challenges facing what she prefers to call “cultivated” meat are many, including scalability and acceptance in the market.

“There are a lot of people out there who are happy to say ‘it can never be done,’” she said. “But one of the benefits of being 50 years old now is that I’ve heard that over and over again in my life. I’ve watched how the things that could never be done have miraculously been done by the people who were willing to put in the hard work to make it possible.”

As for co-existing with other types of protein providers, including plant-based meat alternatives and traditional meat production, Johnson-Hoffman believes the planet is big enough and population growth is substantial enough for all food solutions to thrive.

“I subscribe to the idea that we need all the solutions we can get and that we have a hungry planet,” Johnson-Hoffman said. “We have environmental and sustainability challenges that we need to overcome in order to feed this hungry planet, and I know people love and want meat in their diets.”

During Nicole Johnson-Hoffman’s three-year tenure leading Cargill’s Fort Morgan, Colo. plant, one of the more memorable events transpired after producers from the “The Oprah Winfrey Show” show called the company requesting a tour of the plant to be used on the air and explain how the company ensures food safety and animal welfare in the production of its ground beef. Veteran reporter, Lisa Ling, ultimately toured the plant with Johnson-Hoffman as part of a story segment that aired on the show in 2011. Johnson-Hoffman also went on the show as part of a panel discussion about modern-day agribusiness and was heralded by Cargill for representing the company and the beef industry in a truthful and positive light.

“People still remember the program and recognize me [from being on Oprah Winfrey’s show], which I can’t quite believe,” she said in a 2016 interview with MEAT+POULTRY. “I guess what I take away from that is that beef processing plants are fascinating places. The work done in those plants is really inherently interesting. I believe in my heart that the program was memorable because the Cargill plant in Fort Morgan is fascinating to see.”