We use cookies to provide you with a better experience. By continuing to browse the site you are agreeing to our use of cookies in accordance with our Cookie Policy.
Home » True Story Foods prosciutto launches at Sprouts stores

The product is dry-aged for at least 10 months, the company said, and the curing is done by a salame facility with a history of making Italian salumi for more than 100 years. True Story Foods prosciutto is antibiotic-free and contains no nitrites, nitrates, or preservatives. 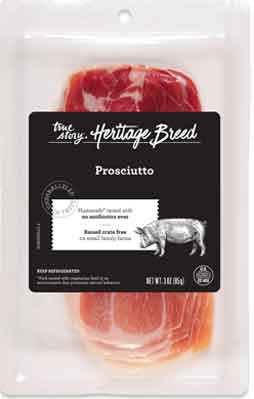 “Sprouts Farmers Markets has shown its dedication to natural foods since its founding, and that dedication extends to the deli aisle,” said Phil Gatto, chief executive officer of True Story. “This is a perfect example of a brand/retailer partnership based on shared values.”

The company is currently onboarding additional family farmers to meet demand for humanely raised pork that is Proposition 12 compliant. Prop 12 is California’s animal confinement law. True Story Foods said the company has seen increased demand for its pork since voters passed the law in 2009.

“Consumers today are increasingly conscious of not only what’s in their food, but where it comes from,” Gatto said. “Animal welfare standards like crate-free are no longer just a nice-to-have. Today’s customer wants to purchase meat that’s raised with respect.”