We use cookies to provide you with a better experience. By continuing to browse the site you are agreeing to our use of cookies in accordance with our Cookie Policy.
Home » In the green

Since then, the popularity of the specially formulated brisket product has increasingly become a year-round staple among the company’s loyal customers in the retail and foodservice segments.

“One thing that drove that was the prevalence of Reuben sandwiches on restaurant menus,” he said. “Today, the day-to-day sales of corned beef are huge. They’re still not as big as St. Patrick’s Day, but it’s a big part of our business.”

Boyle’s uses a formulation to season its corned beef for retail and foodservice customers that was perfected by the company’s founder, Bob Boyle, who started the business more than 80 years ago.

That potent recipe, which is salt based and combined with oleoresins is the basis for Boyle’s signature manufacturing process. Ouverson said a packet of just 17 ozs of the spices are used to flavor 1,250 lbs of brisket used to make corned beef or pastrami.

“You can just smell it even through the package,” he said, “and that aroma, even though it’s so strong, it’s very pleasing.”

The spice packet is mixed with water, soluble garlic and sugar (for pastrami) and after injection, they are left to soak up the seasoning in vats holding 1,000 lbs of brisket each for three days.

Around St. Patrick’s Day each year, Boyle’s will have up to 30,000 lbs of brisket soaking in a “cover pickle” on any given day, just waiting to be packaged after three days. Emptied vats are quickly replaced with more pumped briskets.

He’s quick to point out, however, that the Boyle’s corned beef and pastrami flavor is dependent on starting with quality raw products, the majority of which are sourced from Angus cattle. Hand trimming about one-third of the fat from the incoming meat is easily the most labor-intensive part of the process before any seasoning or pumping is done. Boyle’s retail briskets are cut from larger flats, with each retail cut weighing between 2 ½ and 4 lbs. Larger, whole briskets are packaged for foodservice customers in pre-formed pocket packages weighing between 12 and 14 lbs after trimming and pumping.

While corned beef and pastrami are staples at Boyle’s, the company has diversified its product mix and grown its customer base considerably since Ouverson joined the company about 25 years ago.

Corned beef and beyond

Ouverson started working in the meat industry about 37 years ago. He came to know Boyle’s Famous Corned Beef as one of its foodservice customers. At that time Bob Boyle owned the company and his business was at somewhat of a crossroads. Ouverson was managing a custom slaughter and processing plant near Orilla, Iowa – Smith’s Wholesale Meats – about 25 years ago when he and his then-business partner, Don Wendl, found out there might be an opportunity to buy out their favorite corned beef supplier in Kansas City, Mo.

“They were potentially going to go out of business, and we decided to come down here and save it,” Ouverson said. 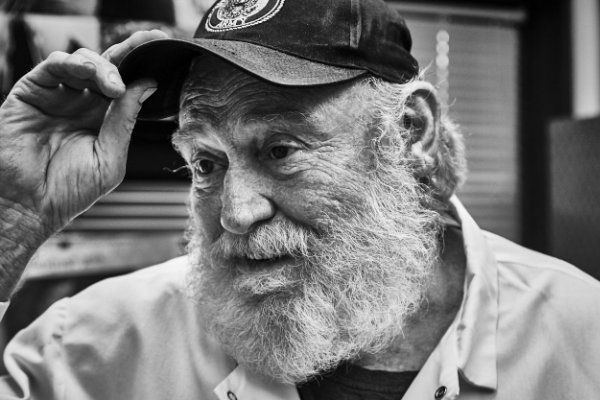 Indeed, Wendl did acquire Boyle’s in a handshake deal with Bob’s wife, Viola, in 1997, about four years after Bob died. Ouverson operated Boyle’s after relocating to Kansas City that same year. Since then, he has seen plenty of change within the industry, as well as in the company’s strategy, not to mention in the ownership of Boyle’s. Under his leadership, Boyle’s thrived. He applied much of what he had learned about running a successful meat plant from working at Smith’s, including custom slaughter and processing meat for retail sale at the plant, as well as for distribution to foodservice customers. As part of Boyle’s, he was committed to the tradition of a respected family name in Kansas City.

In the late ‘90s, the company’s annual sales had dropped to around $1 million with just handful of workers. Today, the company employs about 65 and sales have increased more than 25-fold.

Lenexa, Kan.-based Auxano Holdings Inc. purchased Boyle’s from Ouverson and his longtime partner in 2017. The acquisition was one of three foodservice-focused meat companies purchased by the parent company, which included National Steak & Poultry and Hausman Foods. The three companies merged under the heading of NSP Quality Meats, a subsidiary of Auxano Holdings in 2018, with headquarters in Owasso, Okla.

After the sale, Ouverson continued to work at Boyle’s and today serves as the president and general manager. Looking back at the past 25-plus years, he said running the business has been a “learn-as-you-go” process, especially making the transition from Smith’s to Boyle’s.

“I went from doing portion-control cutting for restaurants to mass manufacturing cooking.”

He said the process was easier thanks to the assistance of some veteran employees that worked at Boyle’s and stayed with the company when Ouverson first took the reins.

“As a group we put together a really nice business and continued Bob Boyle’s legacy.”

That legacy was built on corned beef and establishing unrelenting quality standards.

“He [Bob Boyle] deserves every bit of the credit for getting it started and a bunch of us thought it was worth keeping it going,” Ouverson explained. “That’s how we got here.”

While the product line has diversified considerably in recent years, when Ouverson arrived at Boyle’s, the main products were corned beef, roast beef, pastrami and a liquid smoke brisket.

“That was it, just those four items,” he said.

Since then, many value-added products have joined the line-up such as Canadian bacon, pizza toppings, smoked turkey drumsticks, pot roasts and many more after customers would ask Boyle’s to develop new products and take them to market. 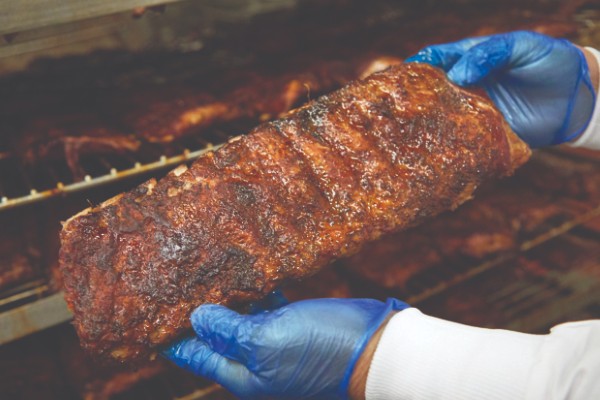 With corned beef as its staple, Boyle's has added a variety of smoked meats to its portfolio including pork ribs.

Ouverson said it was in the early 2000s when he recognized that demand for smoked meats was going to take off.

“And obviously it did because almost everything revolves around smoked products anymore,” he said.

While Boyle’s now processes as many as 200 SKUs from the plant, Ouverson accepts the company’s volume is limited and as a niche, craft-based processor he is content to cater to smaller foodservice customers and retailers with 400 to 500 locations.

One of those retail chains includes Hy-Vee, which stocks Boyle’s products at stores throughout the Midwest in addition to supplying its commissary in Ankeny, Iowa. The company also sells its corned beef to Associated Wholesale Grocers, which distributes to many grocery chains, including Balls Food Stores and other small, independent chains. It is working with the smaller chains that allows Boyle’s to offer specialty items such as mortadella and capicola, which were developed at the request of a customer.

Another specialty item is Boyle’s burnt ends, which Ouverson claims were the first commercially available burnt ends of their kind. Demand for that product has driven production to as much as 5,000 lbs per week and continues growing.

“We want to maintain our own identity, create our own items and not chase the things everybody else does,” he said. 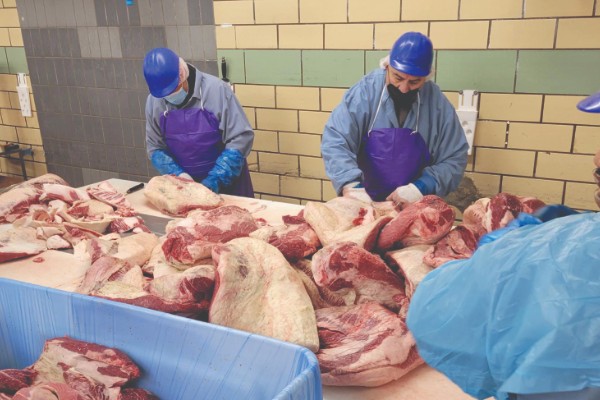 Despite the rigorous production and tight quarters, Ouverson said it has been the loyalty and comradery of the company’s workers that have seen it through the ups and downs through the years.

“We have a really close group of people here,” he said. “They care for each other, and they’ve hung around a long time even through a lot of (challenges) during COVID. They like it here. It’s amazing to see the friendships that have formed and how they really enjoy being around one another.”

To celebrate the employees and their hard work, Ouverson often treats workers to outdoor picnics at lunchtime to enjoy some of the food they work so hard to produce and St. Patrick’s Day is always a festive occasion at Boyle’s.

“We like to do things that make people feel special, so they understand that we have an interest in who they are and not just treat them like a number,” he said.

Reflecting on the opportunity to continue working at the plant after the purchase by the Auxano group, Ouverson said his commitment to Boyle’s never wavered.

“They wanted me to stay and I was glad to stay,” he said. “I like being around food, I like what I do; it’s enjoyable to come to work every day.”