When Ben Cohen and Jerry Greenfield got into the ice cream business in 1978, one of the ways they chose to differentiate was by adding lots of inclusions to their frozen treats. Cohen, who has severe anosmia – the inability to smell or taste – was vested in selecting ingredients he could appreciate in foods. These were inclusions that contribute to appearance, mouthfeel and texture. These are some of the same reasons meat, poultry and plant-based processors are getting creative with adding extras to everything from nuggets to sausage.

In the protein space, many such inclusions also contribute to the nutrition profile of the product. When fruits or vegetables are added, for example, they bring moisture to the product, allowing for a reduction in fat. Grains and legumes contribute fiber and plant-based protein.

Much like Cohen and Greenfield (Ben & Jerry) viewed ice cream base as a carrier for goodies, meat processors might consider ground products as a culinary blank canvas. Maintaining piece integrity from production to plate is a priority. One of the best ways to do this is to freeze product.

That’s what brothers Scott and Brad Filbrandt, second-generation owners of Bob’s Meat, South Haven, Mich., do with their hand-made brats. Varieties include dill pickle, mac and cheese, and blueberry.

The latter uses locally harvested fruit that has been dried, as South Haven ranks as one of nation’s largest growers. The dried blueberries can also be found in the brothers’ breakfast pork links.

One of the company’s more complex items is the mac and cheese brat. It includes visible par-cooked elbow pasta and diced cheese. For extra cheesiness, cheese powder is added to the ground meat mixture prior to encasement. Another specialty is the gouda portabella ancho smoked pork sausage.

The Meat Lodge, Sioux Falls, SD, also relies on freezing to keep its inclusion-infused products at peak quality. The company offers specialties such as pizza brat patties, which include diced cheese, and a Philly-style skinless brat with diced cheese, bell peppers and onions.

The company uses pasteurized process cheese designed to have a controlled, creamy melt with no separation or stringiness. Ingredient suppliers offer a range of restricted-melt process cheeses and no- and low-melt natural cheeses, such as feta, halloumi, queso blanco and paneer, for use in meat products. These cheeses get creamier when heated, rather than oozing and losing form the way cheddar, mozzarella and Swiss do when added to meat products. Current clean-label trends are driving the use of natural cheese, as it is minimally processed and typically contributes very simple ingredients to the final product, e.g., milk, salt, culture and enzyme. 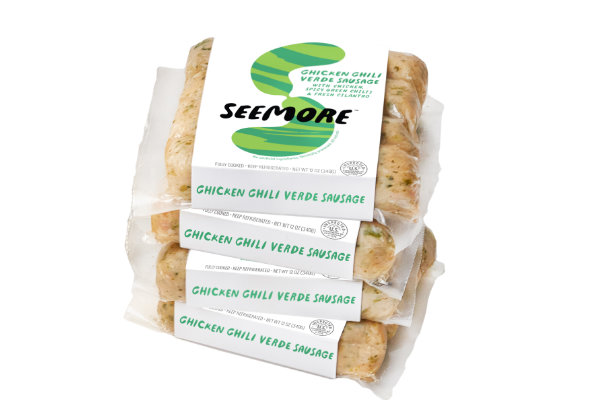 Processors have found that one of the best ways to add flavor and texture to sausage is by adding inclusions made of vegetables and fruit.

While cheese is one of the most common inclusions in meat products, and not just sausages – think Cordon bleu – it’s fruits and vegetables that have been gaining traction in recent years. And when such ingredients are added, and especially if in significant quantities, these meat products are touted for their plant-based components and are often referred to as blends.

Chicken Parm, for example, is made with humanely raised chicken, roasted tomatoes, basil, cheese and toasted breadcrumbs. The newest flavor, Chicken Chile Verde, is an American spin on chorizo that contains ample poblano peppers, spicy green chilis like jalapeno and serrano, fresh cilantro and garlic. While it comes in the same link format as other varieties, the company encourages crumbling the meat and cooking it up for use in tacos or anywhere you would add chorizo.

Nicoletti grew up in the meat industry and for the past decade worked at perfecting the art and science of mixing vegetables into sausages. She named the company after her grandfather, Seymour Salett, a retired butcher. The company name is also a nod to Nicoletti’s promise of transparency in everything, from production to ingredients. She wants customers to “see more” veggies in her products. 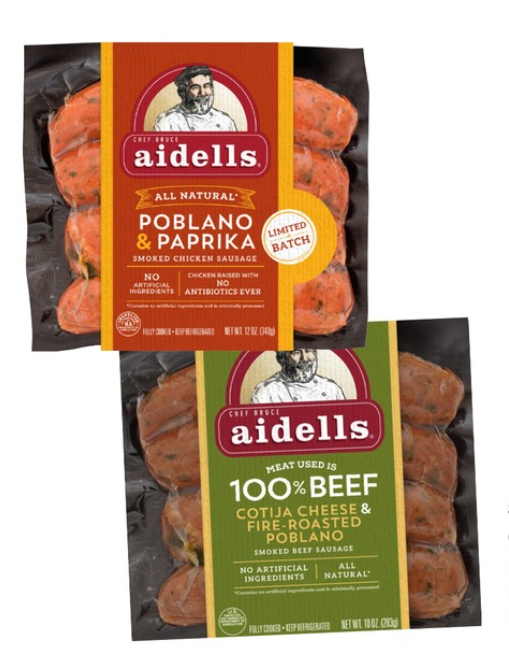 While inclusions may appear as a simple, easy way to create line extensions or limited-time offerings, not all inclusions are created equal, nor are the meat matrices. One key variable is the pH of the ingredient and the meat system. Changes in acidity impact color, taste and succulence. Succulence is related to fat and moisture retention. Too much purge during cooking will dry out the meat, and depending on the inclusion, it may dry and get chewy, or it may turn into mush.

That’s why moisture content of the meat matrix and the inclusions is an important consideration. If there’s too much difference, moisture movement – inclusion to meat matrix or meat matrix to inclusion – may occur. Too much movement in either direction results in product breakdown. Fruits, vegetables and cheeses all have varying moisture levels that may impact the stability and cohesion of the system.

When it comes to including fruits and vegetables, dried and semi-moist bits and pieces are often the smartest choice. They may pull some moisture from the meat matrix, but just enough to become tender. They also don’t bleed as much as fresh fruits. These dried versions are often infused with a humectant to keep them soft but prevent moisture migration.

Unprocessed whole fruits can be quite challenging to work with, especially if the product is intended to have a lengthy refrigerated shelf life. They will leak moisture into the meat matrix over time, creating mushy pockets in the cooked product. When fresh fruit is used, it is best to freeze the product immediately after manufacture until it’s ready for preparation and serving.

Manufacturer Gilbert’s Craft Sausages, Wheaton, Ill., sells its inclusion-loaded, fully cooked chicken sausages fresh. The key to maintaining inclusion integrity is the sous vide process, a cooking technique involving vacuuming and sealing the sausage and then slow cooking it in water at low temperatures until it is fully cooked. For Gilbert’s, each sausage is individually vacuum-packed to assist with freshness. Specialties include Fig & Feta, Caprese (mozzarella, basil and sun-dried tomato) and Aloha (pineapple, ginger and brown sugar).

Sausages and meatballs are mealtime must-haves for a growing number of families as at-home cooking continues to remain steady, according to Jeremy Kross, brand manager, Aidells brand. Consumers are looking for new recipe inspiration. While some have sought-out familiar flavors, many are looking for global flavor inspiration.

The brand also is rolling out a first in the meatball category: chicken with butternut squash. The fully cooked meatballs contain identifiable diced pieces of this autumn-favorite vegetable.

While using the real deal – whole fruits, vegetables, cheese, etc. – appeals to label-reading consumers, there are other options to assist with quality and costs. Some suppliers offer carefully crafted inclusions that can be manipulated to meet varied sensory targets. For example, neutral-tasting and colored apple may be formed into a piece that then gets infused with the juice of other fruits, such as blueberry. This allows for a “made with real blueberry” claim, with both apple and blueberry appearing in the ingredient statement.

These inclusions are either lipid- or carbohydrate-based bits. They are infused with flavor and come in a range of sizes. Size influences flavor distribution and visual effect in the finished product.

Meat products with lipid-based inclusions have been found to withstand panfrying, baking and microwaving. Higher-sugar content inclusions can undergo caramelization during dry-heat cooking, which may add an extra flavor dimension, as in a maple inclusion for a breakfast sausage.

Such inclusions can also deliver smoke flavors, which add a touch of grill flavor without needing to grill. They may also be used to introduce alcohol flavors, such as beer, bourbon or wine. By using such fabricated inclusions, a processor can have one base meat matrix recipe, and simply switch up the inclusion for a new limited-edition flavorful offering. 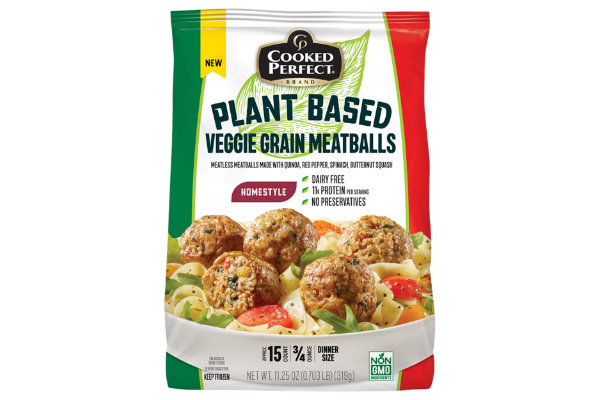 More than bits and pieces

As mentioned, inclusions contribute to appearance, mouthfeel and texture. And, sometimes they are more than bits and pieces. Cherry Hill, NJ-based The Real Good Food Company Inc., knows this well. The company focuses on high-protein, low-carbohydrate, grain-free and gluten-free meat-based prepared foods loaded with extras. Its newest offering is creamy spinach and artichoke stuffed chicken, where a cheese filling carries chopped vegetables. In most meat applications, diced, shredded and even julienned vegetables work well. Managing moisture is paramount.

Partially hydrated grains, including barley, oats and quinoa, as well as legumes, are showing up in meatballs and plant-based products. Not only do they provide sensory appeal, some contribute protein and fiber.

Bridgewater, NJ-based Applegate Farms, a subsidiary of Hormel Foods Corp., now offers Applegate Well Carved, a brand designed to satisfy conscientious consumers who are being mindful of their meat intake and its nutritional, ethical and environmental impact. The chef-crafted line includes meatballs that combine meat with whole organic vegetables, legumes and grains. All products boast a transparent ingredient list, avoiding the many questionable ingredients found in heavily processed plant-based protein alternatives, according to the company. The organic Asian-style pork meatballs are made with brown rice, green onion, carrot and parsley, while the organic Mediterranean-style turkey meatball is made with lentils, feta cheese and spinach. One serving of either contains a half-cup of vegetables.