We use cookies to provide you with a better experience. By continuing to browse the site you are agreeing to our use of cookies in accordance with our Cookie Policy.
Home » The right stuffing

Like a lot of things in the meat and poultry industry, the tools that processors use when making their products are of greatest value when they enable processors to accomplish three things: ensure consistent portioning, create accurate net weight packages, and minimize giveaway – all of which add to processors’ bottom lines.

That’s why in sausage production, vacuum fillers and stuffers have been a big step forward from say, older-style piston stuffers, said Stefan Neumann, a meat specialist with Reiser, in Canton, Mass., a supplier of sausage manufacturing, processing and stuffing equipment. Sausage stuffing technology has advanced with the industry trend toward automation in the production of meat and poultry products.

What sausage stuffing means may be self-evident – the encasement of meat or another kind of emulsion into a casing or wrapper that keeps it in a certain shape, prevents it from spoiling, and gives it a certain bite or texture to the consumer when it is cooked, smoked, or dehydrated.

But the equipment used to achieve these goals has evolved as the proteins found in sausage have expanded far beyond what was originally considered sausage. Not only meat, but poultry, vegetables, fish, and now, plant-based protein are part of the sausage category, said Victor Silva, West Coast technical specialist and sales for Risco USA Corp., South Easton, Mass., a maker of food processing equipment and vacuum stuffers.

“Sausage-making began at first as a means of preserving meat,” pointed out Brian Krumsee, western regional sales manager for Handtmann Inc., a maker of sausage stuffers and food processing equipment in Lake Forest, Ill. “When deer or cows were harvested, you would take the meat, add salt or other spices, and then put it in some kind of casing material. At first, natural casings were used, from the intestine of the animal. Then collagen, or artificial casings were developed. There are also plastic casings and now plant-based casings that can be made from seaweed.”

Whatever type of casing is used, there are several types of sausages, Krumsee explained.

“There is fresh sausage, made from meats that are neither cured nor smoked, like a fresh pork sausage, or bratwurst or Polish sausage, for example. There is cured sausage, which could be cooked or dried. The cooked could be lightly smoked, then cooked. Dry sausage could be something like salami or pepperoni,” he said.

The casing of sausage allows the processor to portion each link, to process and package large quantities of fresh or ready-to-eat (RTE) sausage or for the consumer to have an easy format to cook or reheat the sausage,” Neumann said.

The expansions of types of casings used in sausages often have to do with the end-user, the consumer, because of what the consumer would like, or sometimes restrictions that consumers face. 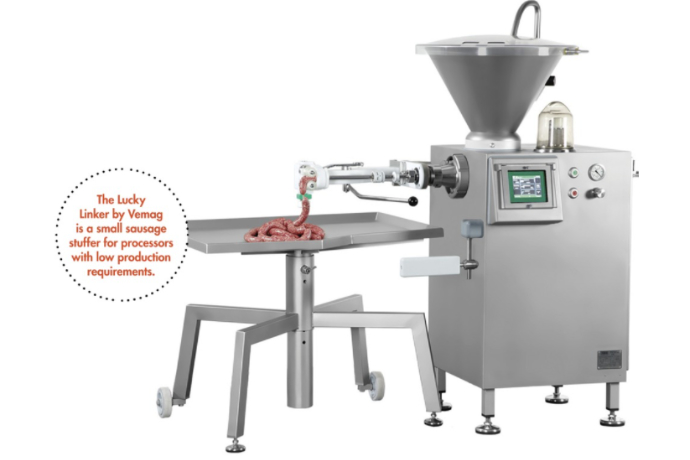 “So, there would be pork, beef, or sheep casings, from animal intestines,” Neumann said.

“But Muslims and Jews couldn’t consume the pork, so we would use beef casings,” Silva said. “The same thing would be true of the sausage filling – the meat or other product used to fill the casing. There was a lot of pork filling in the sausage, and there still is. But there are also many other fillings, like chicken, vegetable, and plant-based fillings.”

That gets us to the sausage filler or stuffer, particularly the vacuum filler or stuffer. These stuffers are used for many tasks beyond making what we think of as sausage. For example, bakery items and pet foods,” Silva said.

Neumann explained how vacuum stuffers work. “Our fillers work by using a vacuum pump. The pump draws product into our double screw or vane system that helps to create the portion. A small amount of air is also reduced from the product.

“We also have a total vacuum system, in which we remove all the air from the product by vacuum. These systems are more complex and operate with two separate vacuum pumps,” he said.

Neumann explained the current technology offers high-speed linking, hanging, grinding, portioning, forming patties and meatballs, and many other options, which are not possible with a piston stuffer.

“Handtmann sausage stuffing and related equipment provides automation, flexibility in the processing operations, portioning accuracy, and an extremely high degree of variability in all the process steps, and new market demands, including linking, dosing, forming and cutting, extruding, grinding, networking and controlling, and tying to additional equipment,” Krumsee said.

He described the VF620 vacuum filler as “a jack of all trades” for sausage making, with precise product feed into the vane cell feed system with firmer cut and uniform distribution of the products for filling.

Reiser’s tools can portion, form, extrude, coextrude, pump and inline grind products, while removing hard particles from the sausage. The fillers can twist link the length portion with exact weight, length and diameter of the sausage.

“What is very important is that our equipment, including sausage stuffers and related equipment, can be linked together on the production line, so that processors can create their sausage products, or other products, all as a part of the line, with no separation in what you’re doing, including downline equipment, cutters and link lines,” Silva said.

There are also different sizes of equipment varying by the pump rate. “They can range from 600 lbs an hour to 20,000 lbs an hour. The equipment is geared for whole muscle, like a ham log, to deli meats put in bags they get cooked in,” he said. 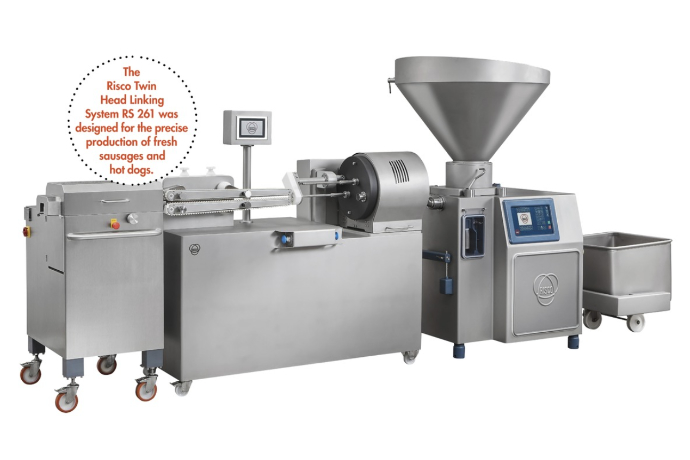 Silva pointed out major changes in sausage manufacture that may have their up and down sides. “Sausage-making used to be more of an art than a science,” he said. “Now, the technology has created a simplicity of ease, which is a good thing. You can set it [for making the sausage] and forget it. Today, you can put anyone on the machines, and you’ll get a good job. There is no doubt that we are advancing the tools, including sausage stuffers, as part of the industry movement to automating the lines,” he said. They include new automation controls, including hands-free options.

Yet despite the movement toward automation, especially in the large poultry and meat processing industry, all three sausage filler makers – Handtmann, Reiser and Risco – believe the small meat and poultry processing industry has important customers and make smaller-sized equipment that can be employed and used easily by that segment of the industry.

An important thrust in the design of new technology for sausage processing ties into the increasing shortage of labor in the meat and poultry processing industry, both large and small, as well as in American industry in general.

“The most difficult resource to find right now is labor, there is no doubt about that,” Krumsee said. “Our job is to provide solutions, help for processors to make their products. Our meat processing equipment, including sausage fillers, help to eliminate the need for more labor. So, with less labor available in this industry, making up for the lack of labor is very critical, and it is important for us to do that.