Robert “Tinky” Maeker and his father originally started what would become the Maeker’s Sausage & Processing business as a Shiner, Texas, grocery store and meat market in 1967. Maeker and his father experimented and made several different types of smoked country sausages, and the business began growing, year after year.

Maeker’s moved to its current location, 813 E. 16th St., in the ’80s and continued to grow adding customers across the state, including retailer HEB. Maeker said the company’s success came from a commitment to quality and making sausages like they do at home, in the country, with high-quality meats, no shortcuts and no additives. It’s a commitment carried on by current owners, Doug and Melanie Nevlud, and their entire team.

“Every ingredient we use is superior, everything is all muscle proteins and superior spices,” Doug said. “There are no trimmings. We have a good group that understands what I want and the quality I expect.”

The Nevluds bought Maeker’s Sausage & Processing in November of 2015. The facility spanned approximately 6,250 square feet and they quickly added a 528-square-foot retail shop in 2016. Prior to that, the retail sales space at Maeker’s consisted of a 4-foot showcase cooler. Doug and Melanie agreed to add the retail space first after they purchased Maeker’s and began to make it their own.

“It’s not very big but we’ve got it packed full of beautiful products,” Doug said. “It’s like my masterpiece. That’s what I take pride in. We’ve got our sausage in there, we’ve got our fresh cuts of beef, everything is clean, neat and organized. We’ve got some freezers we’ve put in there and we’ve got some upright coolers. We could have used more, but that was as big as we could go.”

“We had just bought the business and we never really borrowed,” Melanie said. “All the capital that we used was our own capital, so we were limited in what we built.”

After the retail addition, the Nevluds continued to improve Maeker’s and equip it for the future. They chipped away at some much-needed building and ground maintenance and repairs, as well as some cosmetic improvements to make the business inviting to food consumers. Then in 2018, the Nevluds invested again, in a big way.

“We took on a huge expansion for us, close to $1 million for a brand new packaging facility,” Doug said. “We’re state inspected, but everything was built so if we ever wanted to upgrade to federal inspection, we are at least up to federal standards. So that and two Alkar 2 truck smokehouses (used) is what we did for the growth. That’s where we’re at now and we still didn’t build it big enough, we’re starting to run out of room with freezer space.”

Doug added that they started using refrigerated shipping containers for additional storage and have another ordered.

To date, the additions and expansions total approximately 4,500 square feet, bringing Maeker’s Sausage & Processing’s footprint to 10,646 square feet. The investment and work put into making Maeker’s what it is today has been a labor of love for the Nevluds, especially Doug.

New equipment has been part of the build out as well. Maeker’s updated packaging system included going from a hand-fed chamber vacuum machine to a Multivac R 085 thermal forming rollstock machine. A Handtmann vacuum stuffer replaced the original Zuber Water Stuffer to speed up processes and a new UltraSource 660-lb capacity Thompson mixer/grinder is on the way.

“It was a lifelong dream of mine,” Doug said. “I’ve always been interested in meat processing. We did our own slaughtering at home, as a kid.

“Later I had a little meat processing business I did at home. I did it on the side of my regular job as a heavy equipment operator for the Texas Department of Transportation. I had a lot of time off and I would use that time to pursue my passion.”

Melanie Nevlud worked in banking for 25 years before she started full time at Maeker’s in February 2020 with her husband. Early on she kept her day job for the benefits and insurance while supporting the business at night and when she could during the day. As Maeker’s grew it became too much to do both.

“So, now I’m here with him full time,” she said. “I obviously don’t know what he knows, but I do try to support him the best way I can. I do all the books which is a job in itself that was overtaking our whole life, so we had to make decisions and go from there.” 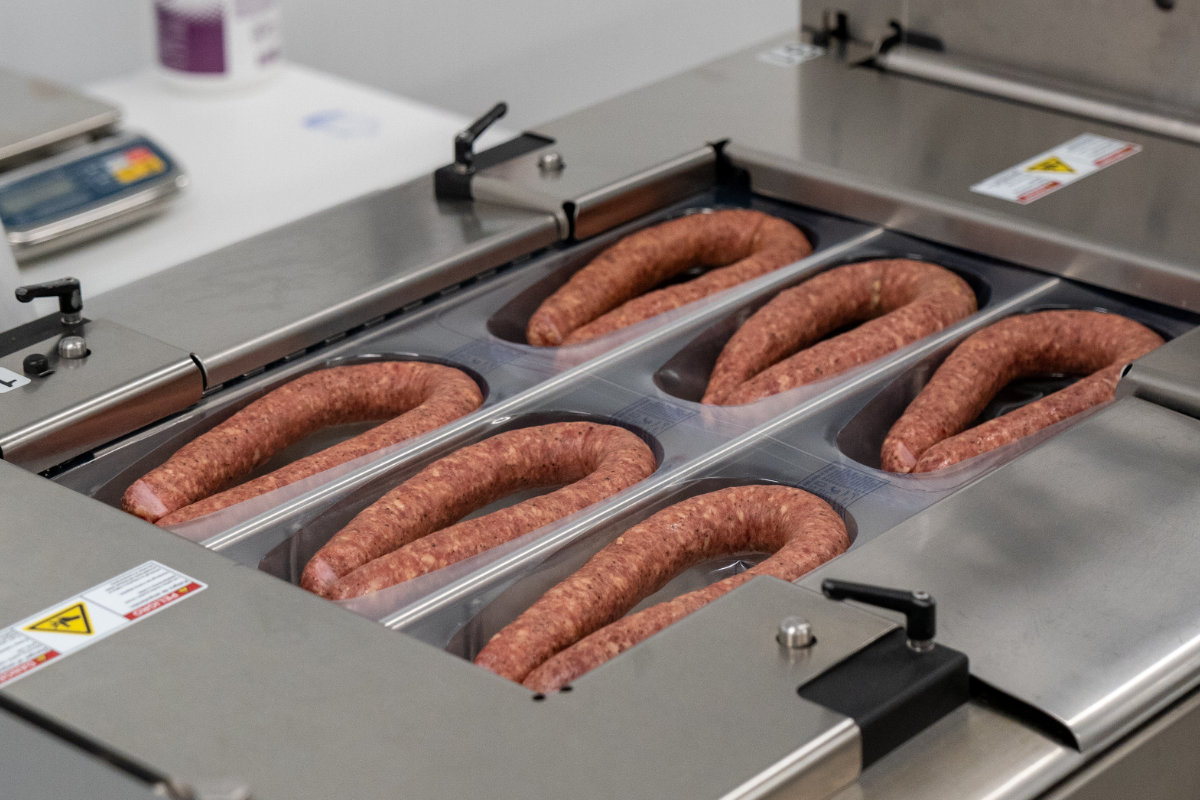 In 2018, the Nevluds invested close to $1 million to update the plant's packaging system

Wholesale sausage accounts for 36% of Maeker’s total sales. The front-of-house retail market makes up 46% of total sales and includes sausage, while online sales have begun to take shape as well.

Maeker’s sausage is in HEB, Walmart, Lowe’s, Arlan’s and Brookshire Brothers grocery stores and a variety of barbecue restaurants. But like so many facets of the industry and business, COVID has affected Maeker’s capability to optimize its presence in supermarkets.

Lauren Pohler, business development and operations manager, HACCP coordinator and marketing executive, said many of the buyers she speaks to have the mindset that sausage is established regionally. This mindset increases the workload to gain success outside the region. 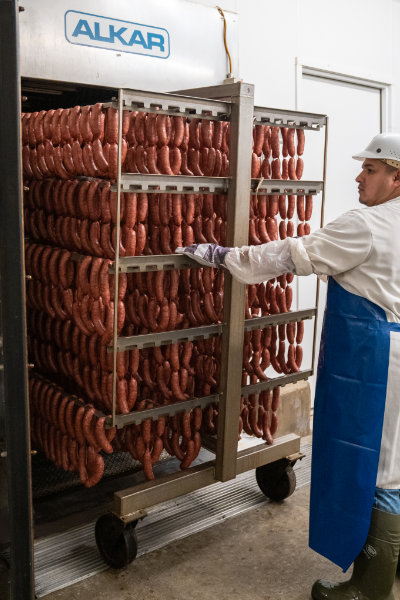 “We’re trying to do some of that through online sales,” Pohler said. “We ship to 48 states, so it’s getting out there. Also, people that lived in Shiner and moved away, they’re still ordering from us because they can’t get it where they’re at.”

Pohler created the online sales segment of the business from scratch. Maeker’s had a website, but the platform to sell was not there. In November of 2019, the sales platform was ready and Maeker’s began to sell immediately. Pohler continues to work the kinks out of online sales and the numbers are growing.

The challenge comes with shipping a perishable product. Products need to reach their destination within a certain timeframe and Maeker’s insists on quality shipping materials. Products ship in 1½-inch reusable insulated coolers which does add to the cost, but the real struggle is shipping to regions that do not fall into 2-day ground shipping and have to ship 2-day air instead, it adds up to a significant cost. Maeker’s split the cost and built some of it into the cost of the product, and some of it the customer sees as a straight shipping charge.

“That has been the hardest part,” Pohler said. “Especially getting discounted rates for shipping because our volume just isn’t there yet.”

“It picked up last year and really picked up this year, so it has really increased,” Doug added.

Maeker’s is still tweaking sales in the retail shop. While they’ve upgraded to two modern cash registers and the ability to process credit cards, they’re still working on a POS system to satisfy all their needs. The store carries many pre-priced items from the pricing machine, but goods from the freezer still require being put on a scale and pricing typed into the register.

“We have so many items, it’s just getting a POS system that can handle price changes from our computer and change everything that needs to be changed,” Melanie said. “None of us really have any background on that, so we need to bring in somebody with that information and get us set up. There have been a couple that tried but didn’t really understand the back story of this whole business and how it needs to all run together.” 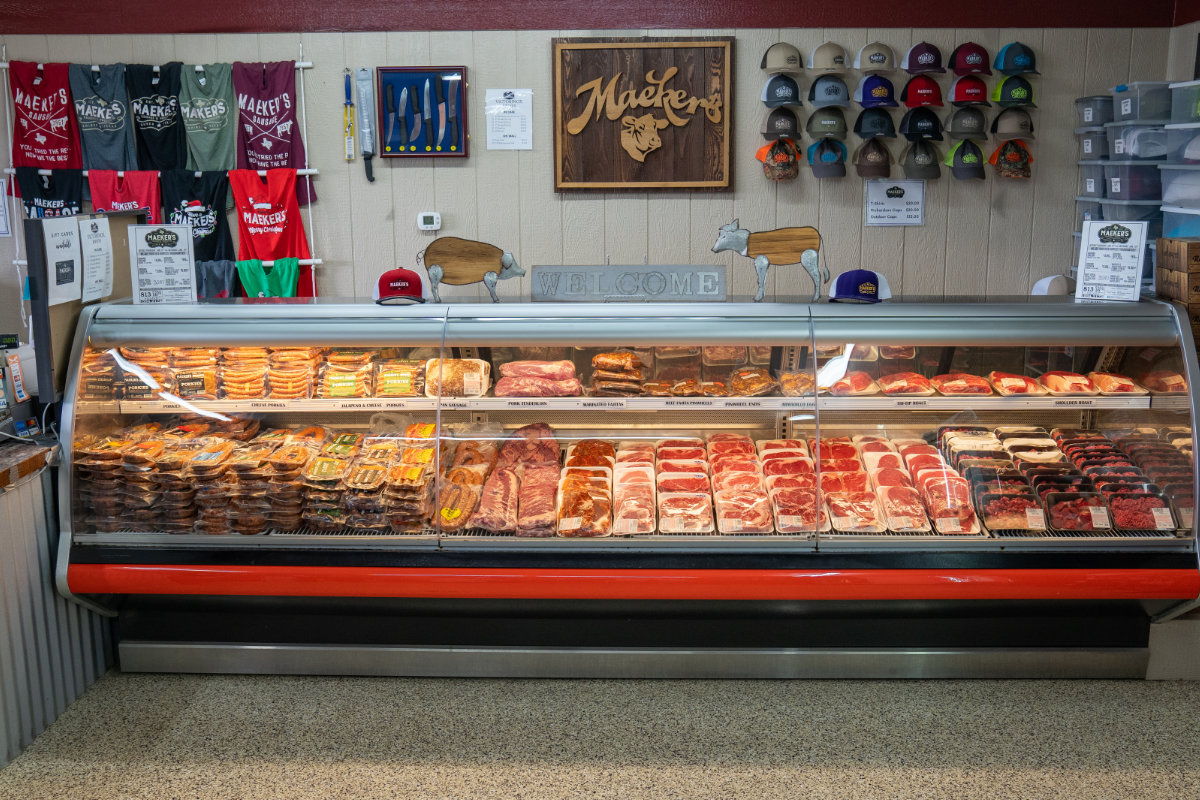 The 528-square-foot in-house retail space was the first investment the Nevluds made in Maeker's.

While Maeker’s sausage represents the bulk of sales and is the brand that both retail and wholesale customers recognize, on the other side of the wall Maeker’s slaughters and fabricates fresh beef, pork, a small amount of sheep under state inspection, and when it’s the season, deer.

Customers for Maeker’s custom slaughter and fabrication services include local farmers who raise their own animals, those who purchase animals during the seasonal livestock shows around the area and purchasers of FFA and 4H animals. Maeker’s also sells fresh meat, slaughtered on site, out of the retail shop.

“We’re state inspected, but we process under custom exemption,” Doug said. “In order to sell to a restaurant or other retail establishments from in-house slaughter, it has to be inspected, and we just at the end of the year got to a point where we will be able to serve restaurants, hotels and institutions with inspected product.”

The custom slaughter/fab and sausage lines can run simultaneously because they are in separate areas, however scheduling comes into play because Maeker’s prides itself on never mixing any animals together. Full washdowns between each custom order prevents cross contamination and Doug will not have it any other way.

“It takes us a little longer to do, it’s a lot more labor intensive the way we do it,” he said. “And we do that with everything, pork, beef, deer, everything. What you bring us is what you’re going to get back. There is no mixing. That’s a guarantee by me and I take a lot of pride in that.”

At one point, Maeker’s had a company come in to sell a tracking system that would track deer all the way through the process, from beginning to end.

“When they found we don’t take everyone’s deer and put it together, they said it wouldn’t work,” Melanie said.

Adriana Olmeda, production manager at Maeker’s, said deer is processed on dedicated days at dedicated times, to avoid any and all cross contamination with other proteins.

“Just like today, we finished all of our inspected products Monday and Tuesday, so we’re dedicating Wednesday and Thursday just strictly for deer,” Olmeda said.

“Your deer equals your sausage,” Pohler added. “There’s absolutely no mixing of batches. Our production manager makes sure that after every deer, they wash down everything before they start another deer.”

Maeker’s customers show their appreciation for the way the company does things by loyally continuing to do business with them. And the team at Maeker’s knows their hard work, investment and dedication pays off by the continued growth of its strong customer base in Shiner, as well as its strong out-of-town customer base.

“There’s still so many things we want to do,” Melanie said. “But when we talk about what we’ve done, we need to take a deep breath and realize how far we’ve come.”