When Italian immigrant Dominic Palumbo came to work in the Pennsylvania coal mines, it wasn’t long before he fell ill from the dusty environment and back-breaking work. Soon after, he taught himself the butchering trade in his own backyard and soon became recognized in the northwestern community of DuBois as the go-to guy for meats and custom cutting.

Fast forward 95 years and you’ll find that his legacy still lives in Palumbo’s Meat Market of DuBois, Pa., a small mom-and-pop meat business Dominic opened in 1927 and is still operated by his son Joe Palumbo.

“My brothers Ted and Tom and I worked in the shop and became the owners of the company, and I bought them out in 1980,” Joe, now 75, said.

“When I became the sole proprietor, I purchased the Wilson Meat plant and moved operations across the street, and enlarged it to include a full-size sausage kitchen, with smoking and curing becoming a major part of the business.”

In 1985, he bought some surrounding buildings and expanded to that existing building, noting that he has gone through a half-dozen expansions over the years.

Palumbo’s Meat Market employs 35 to 40 full-time workers, including several meat cutters, smoked and cured meat processors, dock workers, laborers and customer service personnel. There are currently three generations of the Palumbo family working at the plant. Joe’s son-in-law, Drew Craft, is learning the trade to take over one day to keep the family business moving forward.

Joe has been married to his wife LuAnna for 56 years and has three children, Stephanie Scull, Joe Jr. and Mandy Palumbo. He enjoys working with his grandchildren Anthony Palumbo, Jolea Palumbo and Lillian Palumbo who can also be found at the market doing their part for the company.

Palumbo’s is also fortunate to have long-term dedicated employees such as Sherry Scolese, who’s served there for 41 years, Steve Marshall and Tammy Maines, each with 36 years on board, and Mike McLaughlin, who’s been there 26 years. They also have others who have been working there for over 10 years.

Joe had previously owned a freezer locker business and full grocery supermarket in the surrounding area but sold them so he could focus his attention to growing and expanding the wholesale and retail meat trade. Over the years, he has purchased modern smokehouses, industrial slicers and packaging machines to keep production more efficient and assure product consistency. 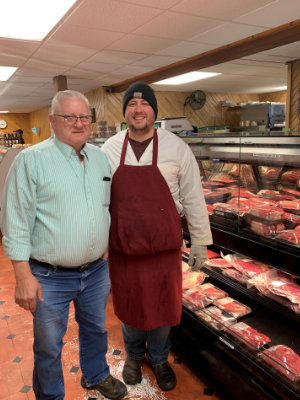 Palumbo's Meat Market is truly a family-run business. Joe Palumbo (left) and his grandson Anthony spend many hours working side by side in the shop.

While the third-generation processor enjoys a brisk trade in wholesaling meats he purchases from regional commodity markets, he still features protein from local sources. Yet it is the retail wing that is a masterful showplace for a wide variety of the many hand-cut and meat bundles the enterprise offers. The pork display features everything from whole loins to individualized portions and the beef section features a full range of products – if you can think of a cut, they will no doubt have it or prepare it for you.

Another aspect of sales is custom cutting beef and pork to fill customers freezers with quality meats at a discounted price. Palumbo’s offers several meat bundles and bulk items to fit nearly any budget. Many of them are listed on their website palumbosmeats.com.

While the retail meat department includes finished meat items from several other regional processing houses, it also goes gangbusters on the 50 products it makes in-house. For example, the shop has no less than 10 styles of meat sticks, seven styles of hot dogs (including one with peanut butter as an ingredient), five different bacons, seven types of hams, six trail bolognas, five versions of smoked sausage, bratwursts and kielbassas. They also make their own meatballs that are a top seller. 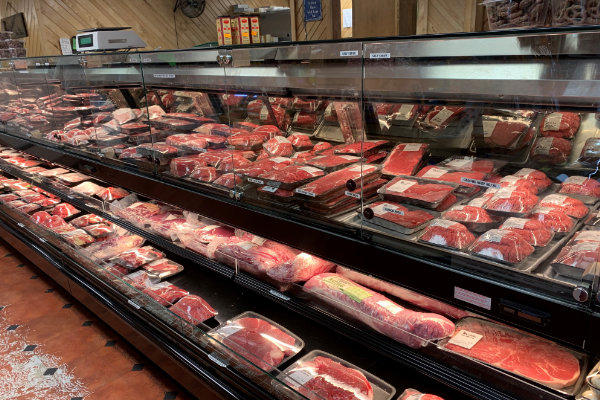 Their deli section is noted for its wide variety of meats, and also for the “Wisconsin-esque” selection of cheeses, many of which they smoke themselves in the production area.

Joe Palumbo is a very busy owner and president but counts on his grandson Anthony as the manager and granddaughter Lillian to tackle on-the-spot business decisions – a relief valve for a shop that is open seven days a week.

“We’ve been able to win cured meat products awards in competitions sponsored by the Pennsylvania Association of Meat Processors (PAMP),” he said. “It’s something like 70 plaques we’ve won for our products, but honestly we’ve been too busy to enter competitions in recent years.”

Joe and his crew have won awards in many categories, including hot Italian sausage, ham, bacon, jerky, lunch meats, snack sticks and cured beef products. In 2021, the business earned the top award in a Tri-County Best Business competition.

He also went through the chairs of PAMP and served as the organization’s president for the 1991-1992 fiscal year. In addition, he serves as board member for the AJ Palumbo charitable trust that focuses on giving donations for education and health needs throughout Western Pennsylvania.

If you think that sounds like a busy person, you’ll be amazed to know that in 2002, Joe opened a restaurant called the Fort Worth and a bar named Coyote Joe’s in DuBois. They feature meats and catering services using Palumbo’s products. It is complete with an old-style arcade with games and prizes, and promotes a Monday steak night, a Tuesday evening chicken and ribs fare, and on Wednesday features a wing night. Imagine that, a meat man finding new outlets for his products.

Joe has seemingly found a way to step back from chopping wood to take time to sharpen his axe. But the story doesn’t end there. In 2018, he purchased a property 20 miles north of DuBois and decided to build what is now Palumbo’s Lodge & Event Center. This rustic structure, located in the heart of Pennsylvania’s elk country, is a popular venue for weddings, wedding party rehearsals and dinners. It offers rooms for a dozen guests for private parties and provides an outdoor setting in one of the state’s most picturesque areas where weddings can be held if they don’t mind a few dozen elk peeping in on the crowd. And yes, catering is done by Palumbo’s Meat Market of DuBois.

We should explain that Joe has followed his father Dominic’s meat traditions, including many recipes from the past, but has also innovated and developed many of his own flavor profiles for his meat products.

Another thing he has followed is his passion for giving customers a high-quality product for an affordable price.

“I look back at the old pictures of my dad at the meat shop with the signs that read ‘20 cents a pound’ hamburger and ‘25 cents a pound’ for veal roasts. That was amazing by today’s standards but was still really affordable then. I believe in keeping our meats affordable and of good quality.

“As for the future, I know that we are just five years from being a 100-year-old meat business. That to me would be something very special.”