We use cookies to provide you with a better experience. By continuing to browse the site you are agreeing to our use of cookies in accordance with our Cookie Policy.
Home » International flavor journey

The theme of “culinary disruption” fueled The Culinary Institute of America’s (CIA) 23rd annual Worlds of Flavor conference held in Copia, Calif., on Nov. 3-5. Many of the chef presenters defined this disruption as a form of blending influences from their heritage, places they have traveled and the communities they serve. They are creating dishes with local ingredients and global inspiration. The flavors they apply to meat and poultry are more than just fusions. They consider them authentic evolutions of native dishes.

The opening session featured Lucas Sin, chef and owner of Nice Day Chinese, New York City, which he described as “Chinese takeout, remixed.” He shared his entry into the current chicken sandwich war. It features a chicken thigh cutlet smothered in General Tso’s aioli and topped with pickled chili and crispy broccoli between toasted focaccia.

A Hong Kong native, Chef Sin cited research showing a rapid decline in mom-and-pop Chinese restaurants across the United States, even before the pandemic. He wants to preserve the concept of Chinese-American food by including disruptive new dishes alongside favorites like orange chicken and beef and broccoli.

Hamissi Mamba and Nadia Nijimbere, a husband-and-wife team that moved to Detroit from Burundi in 2014, saw something similar happening to African restaurants in Detroit, the United States’ largest Black-majority city. They opened Baobab Fare in February 2021 with the intent of keeping the tastes of East Africa alive. The menu includes mbuzi, a dish of slow-roasted goat, and nyumbani, which is beef slowly simmered in a tangy, ripe tomato sauce.

They serve chicken in a variety of ways. It’s pan fried in a rich, tangy mustard-onion sauce to make kuku. Kumuhana is when it’s marinated with onion, garlic and lemon, and then grill roasted.

Fire up the barbecue 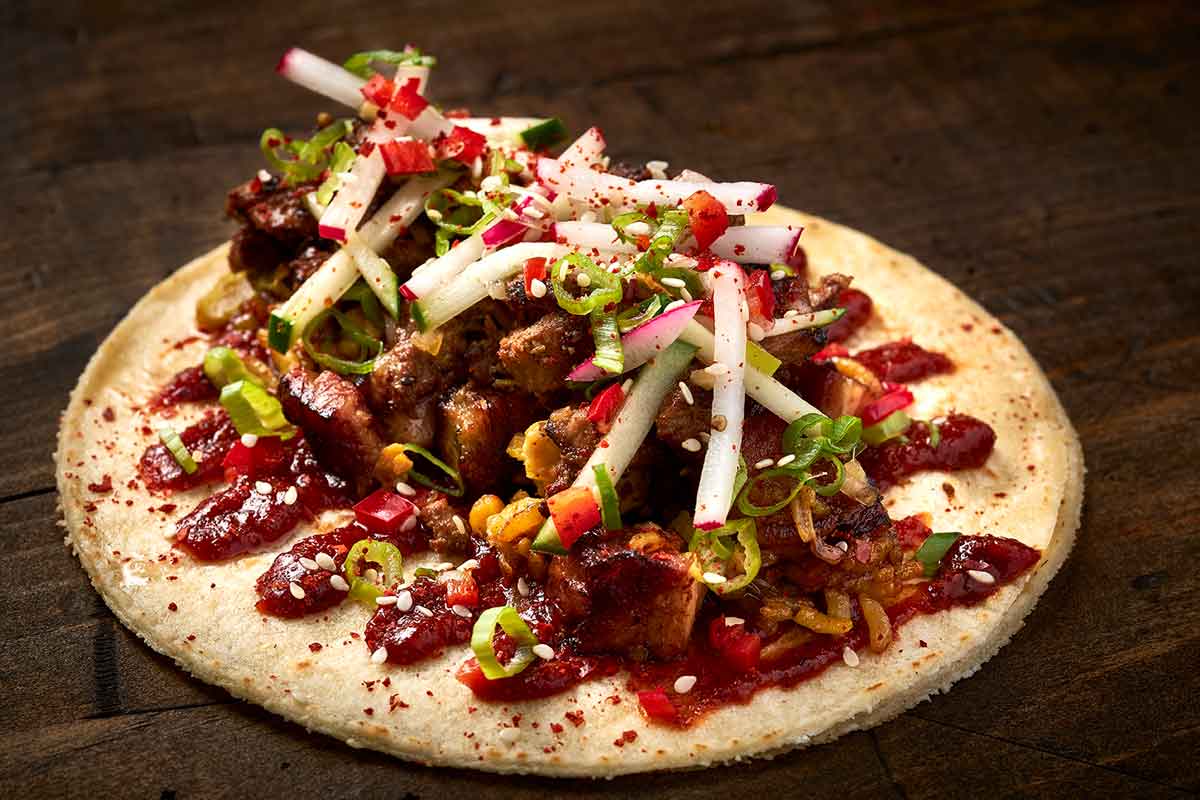 Many international cuisines rely on the tastes that develop when cooking with fire. Meats get infused with unique flavors when their juices – including added seasoned marinades – drip onto hot charcoal or wood. These drippings are pyrolyzed by the heat, creating fumes that are absorbed by the food. The end result is cooked meat with flavors consumers crave. And those flavors vary around the world.

Barbecue has been named the top global taste trend in 2021 by Kerry, Beloit, Wis. Barbecue is an all-encompassing term, with Kerry research identifying a total of 26 barbecue, smoke and grill tastes across the world, including kebab in the Middle East, tandoori in Asia and jerk in Latin America.

“Barbecue might just be the world’s new favorite taste, and the global-leading barbecue trend our analysts are seeing right now shows that consumers everywhere are looking for new and ethnic-inspired specific tastes, such as Korean, Texas or Brazilian, in various meat and snack products,” said Soumya Nair, global director, consumer research and insights. “Consumers love the balance of sweetness, salt, spices and smoke that seems to enhance virtually any application, and we regularly witness new barbecue-flavored items showing up on menus and in stores in foods such as snacks, meats and meat alternatives.

“Our research is confirming that today’s global consumers don’t just crave ethnic-inspired dishes, snacks and flavorings, but also that they’re demanding authentic experiences and tastes that are true to their regions of origin,” Nair said. “Moreover, they’re actively looking for these interesting new snacks, sauces and meat products in the marketplace, and in a variety of applications. Authentic barbecue-flavor innovation, delivered quickly, remains key to winning in this fast-changing marketplace.”

It should not be a surprise then that barbecue has also begun to enter the mash-up trend. You can find barbecue with curry, sweet chili and even beer.

Chef Victor Albisu, owner of Taco Bamba taqueria, has been disrupting the taco scene since he recently opened his six-unit fast-casual chain with locations in Virginia and Maryland. He combines his culinary education with his Cuban and Peruvian roots to develop next-generation tacos that come in concepts such as The Fredneck BBQ, which features barbecue pork shoulder, morita slaw, pickled onions, jalapeño and cilantro. The Jeffrey is a crispy meat spring roll, carne asada, pork al pastor, chorizo, chihuahua cheese, peppers, onions, serrano salsa verde, and as the menu states, “a bit of this and a bit of that.”

Chef Albisu shows how chorizo, a spicy Spanish sausage, has been gaining traction in the culinary scene through flavor fusions. He developed The El Rancho Rasul taco, which is chipotle curry chorizo, hash browns and mint cilantro chutney, all in the diner’s choice of corn or flour tortilla.

There are many versions of chorizo, which is what makes it an interesting meat. The seasonings used are influenced by the country of origin, or in the case of Chef Albisu, what he is in the mood to try.

Most chorizo is made with pork and pork fat, but there are varieties with beef or blends of meat. In fact, KC Cattle Co., Weston, Mo., now offers 100% Wagyu beef chorizo. Wagyu is known for its marbling, which makes this chorizo fatty so it cooks up a bit crispy. The company gives it a Kansas City twist in the spice blend. 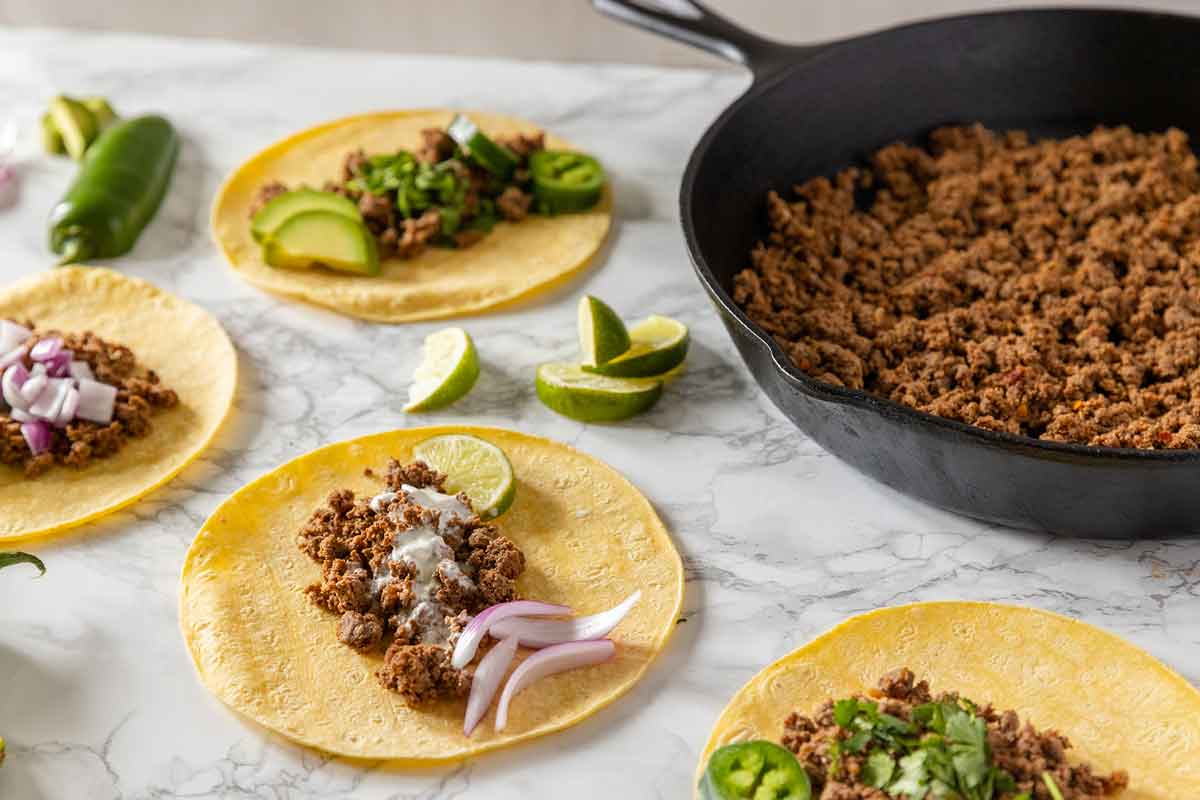 Chorizo may contain an endless variety of peppers and spices, also often along with the fermented flavors of red wine or vinegar. Smoked paprika is almost always added, as it contributes a characterizing vibrant red color. However, Mexicans do make a green chorizo, which gets its color from green chilies and cilantro.

Argentinian chorizo tends to be mild, while Mexican varieties have some kick. If it’s Cuban chorizo, cilantro will be a dominant flavor.

Chorizo comes fresh (raw) as well as cooked – sometimes cured – ready for eating, much like salami. It can also be ground, ready for browning into crumbles.

The newest offering from Seemore Meats & Veggies, Brooklyn, NY, is chicken chile verde sausages, an American spin on chorizo. This vegetable-forward meat company makes sausages that combine fresh vegetables (up to 35% per link) with responsibly raised meat. While the newest offering comes in a link like the other varieties, the company encourages crumbling the meat and cooking it up for use in tacos or anywhere you would add chorizo.

Another new sausage from Seemore Meats & Veggies delivers a taste of the Mediterranean with the inclusion of kale pesto and parmesan cheese. Serving suggestions include adding slices to caprese salad or atop pasta with a lemon cream sauce.

Chef Albisu fuses in the tastes of the Mediterranean in The Pork Chopolopolous taco. While some may think this combination is more suited for a pita, the gyro-style spiced pork with black olive salsa macha and garlic mint cucumber yogurt works surprisingly well in a crunchy corn tortilla.

Capers are another inclusion that introduces a Mediterranean twist to meat and poultry. Chef Tomos Parry of London’s Brat, serves an Italian- and Argentinian-inspired chimichurri made with toasted walnuts, charred spring onions and radishes, chopped gherkins and capers, parsley and thyme on lean cuts of meat, such as beef flank, hangar or skirt steak. This chunky sauce adds a bit of bite and lots of flavor.

Michael McCloud, executive chef of Cobblestone, Chicago, was recruited to develop an unpretentious menu of unique European cuisine with an American twist. His take on Mediterranean is showcased in the bistro burger, which features a 50-50 blend of ground beef and lamb, smothered in pepper jelly, Drunken Goat cheese and arugula.

“Lamb meat has a very distinct flavor profile,” McCloud said. “I’ve found most, including myself, usually need to be in the ‘mood’ for lamb. I knew cutting the flavor with something more familiar, more appealing, would be the draw for this burger.

“I use an 80/20 ground beef mixture,” he said. “Having a fattier beef ratio, like our 20%, tames the lamb. At a higher fat content, you’d lose too much taste of the lamb, anything less, would make the lamb a touch overpowering. Keeping the fat content in the beef just right, is paramount to making the 50-50 a success.”

The semi-soft goat cheese adds that extra layer of flavor. It comes from the town of Jumilla in Murcia, a region in southeastern Spain. The cheese is soaked in Doble Pasta, the traditional wine of the region that is made from the Monastrell grape. It is smooth, not goaty, with a touch of fruitiness in the finish, contributing a distinct flavor to the already uniquely flavorful burger.

The Mediterranean region has many varied flavors waiting to be explored by US palates. In recent years, shawarma, a close relative to Greek gyros and Turkish döner kebab, and a popular street food in Lebanon and other Arab countries, has made its way into mainstream America. The Middle Eastern dish can be made with any meat; however, lamb and chicken are the most common.

FiveStar Gourmet Foods, Ontario, Calif., gives its own unique twists to this classic dish. The company produces a Simply Fresh Kitchen Shawarma Chicken Bowl for Costco stores. The fully cooked entrée is warmed in the microwave in less than five minutes and features spiced, grilled chicken over turmeric basmati rice and chickpeas, along with feta cheese, tomatoes and red cabbage. It gets topped with pickled red onions and lemon tahini sauce.

“We value our partnership with Costco and strive to provide the most innovative products that their members find irresistible in their hunt for culinary treasures,” said Tal Shoshan, chief executive officer of FiveStar Gourmet Foods. “We have perfected our execution within a fairly complex fresh food operation to be able to incorporate meat proteins within freshly prepared meals and still deliver incredible taste and flavors.”

Michael Rafidi, chef and owner of Albi, Washington, DC, brings inspiration from his roots in the Levant region to his menu. He melds the ancient culinary tradition of the region’s coal-fired barbecue cuisine with local, seasonal ingredients. This includes ground duck sfeeha served with pine nuts, lemon and a side of whipped garlic.

His barbecued lamb kebabs are a true fusion of flavors. The loin and smoked belly meat is seasoned with cinnamon and glazed with habanada honey. The habanada has a bright, tangy-like habanero pepper flavor without any lingering heat.