COVID-19 isn’t the only disease causing problems for the global meat and poultry industry. Major reportable animal diseases made industry news headlines throughout 2021. African swine fever (ASF) and avian influenza continued to spread, and bovine spongiform encephalopathy (BSE), both atypical and classical, made an appearance in Europe and South America.

In July, animal disease surveillance confirmed the presence of ASF in the Dominican Republic and in September, ASF appeared in Haiti for the first time in 40 years. The finding set in motion a series of actions aimed at protecting the US swineherd.

In August, the Animal and Plant Health Inspection Service (APHIS) of the US Department of Agriculture announced its intent to establish a World Organization for Animal Health (OIE)-recognized foreign animal disease protection zone around Puerto Rico and the US Virgin Islands. By September, APHIS issued a federal order suspending the interstate movement of all live swine, swine germplasm, swine products, and swine byproducts from Puerto Rico and the US Virgin Islands to the mainland United States.

So far, ASF has not been detected in Puerto Rico or the US Virgin Islands. However, given the geographic proximity of the Dominican Republic to Puerto Rico and the United States makes an outbreak on US soil a real possibility.

KatieRose McCullough, director of regulatory and scientific affairs for the North American Meat Institute (NAMI), led a webinar titled “How to Prepare your Establishment for a Foreign Animal Disease Outbreak” during which she shared steps producers and processors should take to prepare for an outbreak.

“It is the time to be extra vigilant and make sure establishments have their foreign animal disease protocols in place before something happens,” McCullough said.

An outbreak of ASF would immediately halt exports of US pork, and limit movement of live animals and pork products. Industry stakeholders also are taking steps to prepare for such a scenario. Even before surveillance revealed ASF in the Dominican Republic, officials with the Canadian Food Inspection Agency (CFIA) and APHIS developed and signed a protocol to guide bilateral trade if ASF is detected in feral pigs, without cases in domestic swine.

Under the protocol, all trade between both countries initially would stop following confirmation of ASF in feral swine. Then trade would resume in three progressive phases with increasingly reduced restrictions on live swine, swine germplasm and untreated swine commodities. Agencies would set up initial control areas, initiate surveillance/case findings and removal of feral swine and start surveillance in captive swine. Trade restrictions are reduced to the boundaries of the established control area during the third and final phase.

Pork producers in Europe remained on high alert for signs of the disease, especially after Germany reported its first confirmed case of ASF to the World Organization for Animal Health in July. The source of the infection was unknown, but officials confirmed the virus in a decomposed carcass of an infected dead female wild boar found in the German state of Brandenburg.

Germany is a leading supplier of pork to China which has increased imports of pork to fill supply gaps caused by ASF outbreaks there. South Korea, Germany’s second-largest pork export destination, imposed a ban on pork from Germany in response to news of the finding.

Government agencies in Europe and the United Kingdom tracked the disease as it spread westward from Eastern Europe. Outbreaks of the disease were reported in domestic pigs and wild boar populations in the Czech Republic, Kaliningrad, Romania, Hungary and Poland which shares a border with Germany. The Foreign Agricultural Service (FAS) of the USDA reported in November that animal health officials in Poland had confirmed outbreaks in three new provinces. Earlier confirmed cases were mostly on farms in areas already listed as implementing special control measures for ASF.

The first outbreak of the disease occurred in Shenyang, China, in August of 2018. Outbreaks keep popping up despite control measures including movement control inside the country; surveillance outside containment and/or protection zones; screening; quarantine; official destruction of animal products; official disposal of carcasses, byproducts and waste; stamping out; control of wildlife reservoirs; zoning and disinfection. 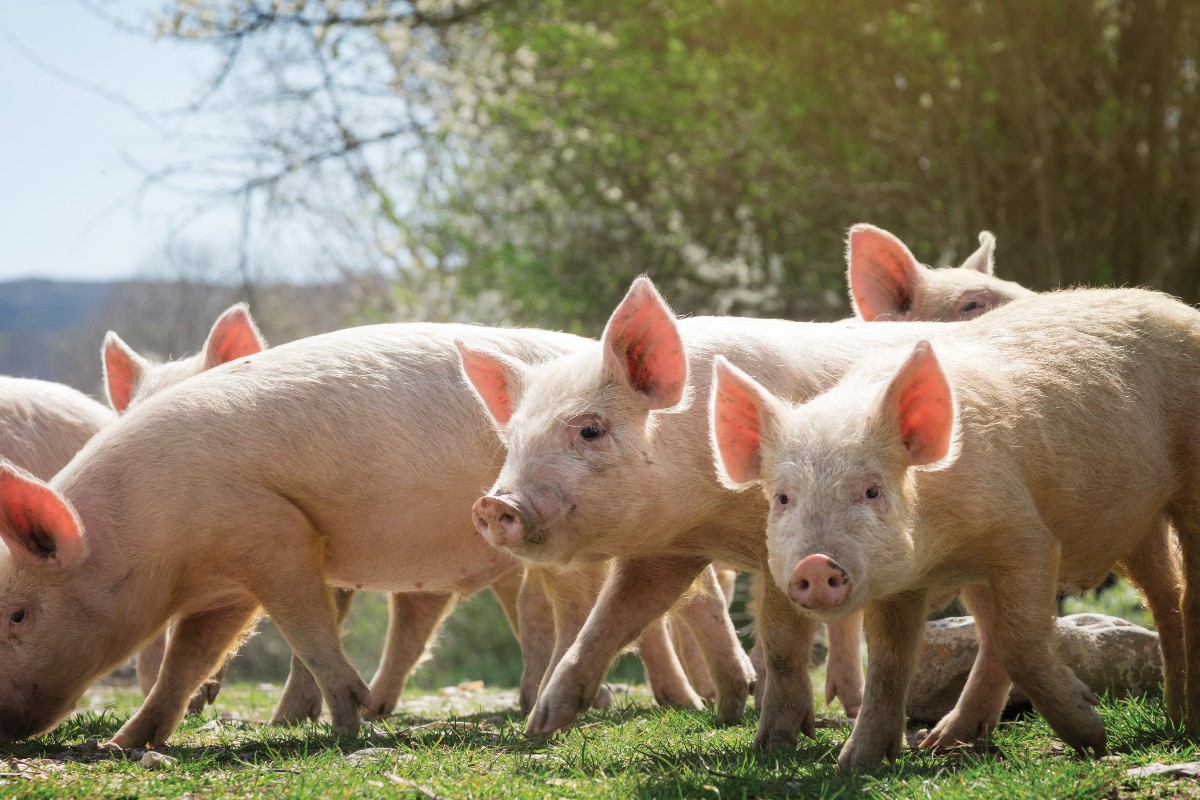 An outbreak of ASF would immediately halt exports of US pork, and limit movement of live animals and pork products.

As animal health experts worked to prevent the introduction of ASF into the United States, scientists with the Agricultural Research Service developed a promising vaccine that appeared to prevent and effectively protect both European and Asian bred swine against the current circulating Asian strain of the virus. The Asian strain of ASF is the strain currently causing outbreaks and threatening the global swine industry.

New research published by the USDA-ARS in the journal Transboundary and Emerging Diseases found that approximately 33% of the swine given the vaccine showed the onset of immunity by week two post-vaccination with full protection in all swine achieved by the fourth week.

ARS has engineered and patented five ASF experimental vaccines and fully executed seven licenses with pharmaceutical companies to develop the vaccines. ARS continues to evaluate more partners to develop these vaccines on a commercial scale.

“We are excited that our team’s research has resulted in promising vaccine results that are able to be repeated on a commercial level, in different pig breeds, and by using a recent ASFV isolate,” said Douglas Gladue, an ARS researcher. “This signals that the live attenuated vaccine candidate could play an important role in controlling the ongoing outbreak threatening the global pork supply.”

In the AI zone

This year, there were multiple findings of highly pathogenic strains of avian influenza across Great Britain, Europe and Asia.

China reported a sharp increase in the number of people infected with H5N6. A travel advisory from the UK Health Security Agency, warned UK citizens, “A record number of human cases with avian flu (H5N6) have been reported from China with onset in 2021, with 22 cases reported in the last 10 months. Before 2021, the largest number of cases of avian flu in China was in 2016 when nine human cases of infection were reported.”

Most cases involved close contact with an infected bird (dead or alive), and markets where live birds are sold can be a source of infection. China has not reported any person-to-person spread of H5N6.

The United Kingdom declared an Avian Influenza Prevention Zone (AIPZ) across Great Britain in November after H5N1 was found in wild birds. The AIPZ required all bird keepers in Great Britain (whether they have pet birds, commercial flocks or just a backyard flock) to take a range of biosecurity precautions.

In France, Julien Denormandie, Minister of Agriculture and Food, announced the country was at “high risk” for highly pathogenic avian influenza because of outbreaks in neighboring countries. By the beginning of August, 130 cases or outbreaks of avian influenza were detected in wildlife or in farms in Europe. The Netherlands ordered the confinement of all commercial farms following an outbreak of H5N8 at a farm of laying hens. In Italy, six outbreaks of H5N1 were detected in broiler turkey farms in the Verona region, Denormandie noted.

In 2021, Canada notified trading partners of its application to change its status from a controlled-risk country for bovine spongiform encephalopathy (BSE) to one of negligible risk. But the United Kingdom was announcing a single case of classical BSE, while Germany and Brazil confirmed cases of atypical BSE.

In September, the Animal and Plant Health Agency (APHA) of the Department for Environment, Food & Rural Affairs confirmed a single case of classical BSE at a farm in Somerset, England. The animal died on the farm and was disposed. APHA launched an investigation of the herd, the premises and potential sources of infection.

“Movement restrictions have been put in place on the farm,” Christine Middlemiss, chief veterinary officer, said at the time. “This is standard procedure until we have a clear understanding of the origin of the disease. This is further proof that our surveillance system for detecting and containing this type of disease is working.”

Middlemiss said the UK’s overall risk status for BSE is still at “controlled” and there is no risk to food safety or public health. The finding also did not affect the UK’s ability to export beef. In September 2020, the UK resumed shipping beef to the United States for the first time since 1996. The United States banned European beef since a BSE outbreak in the United Kingdom more than 20 years ago.

The same month as the UK BSE finding, Germany reported a single case of atypical BSE in a 14-year-old cow that was born without clinical signs of the disease. Atypical BSE occurs in older cattle, usually 8 years of age or greater, and it seems to occur spontaneously and sporadically in all cattle populations.

The Ministry of Agriculture in Brazil confirmed two cases of atypical BSE. The cases were found at meat plants in the Brazilian states of Minas Gerais and Mato Grosso, the agency said. Brazil temporarily suspended exports of beef to China, the top customer for Brazilian beef.

The cases were discovered in June of 2021, but relevant authorities didn’t report the cases to the OIE until September. US producer groups took issue with the delay. In November, the United States Cattlemen’s Association (USCA), the National Cattlemen’s Beef Association (NCBA) and R-CALF USA called on Agriculture Secretary Tom Vilsack to immediately suspend imports of beef from Brazil over concerns that the country’s animal health agencies aren’t reporting outbreaks of animal diseases in a prompt fashion.

In a letter to Vilsack, the NCBA asked him to indefinitely suspend imports of fresh beef from Brazil until after a thorough review and a risk assessment of Brazil’s Ministry of Agriculture, Livestock, and Food Supply (MAPA), and its veterinary diagnostic laboratory system by the USDA.

“While atypical BSE cases are rare and are excluded from OIE’s scope of BSE categorization, most countries immediately report atypical BSE cases as a matter of transparency and as a commitment to objective, science-based standards,” NCBA said in its letter. “In fact, the OIE clearly states that ‘Members must report the occurrence of animal diseases listed by the OIE, the emergence of new diseases and significant epidemiologic events within 24 hours of the event.’ Unfortunately, the OIE was not notified of Brazil’s two BSE cases until Sept. 3, 2021 – several weeks after both cases were identified.”