Brothers Joe and Michael Quinn are on a food-focused mission with lofty goals and a noble cause. In 2015, the duo revived what was once an iconic hot dog brand, Brooklyn, NY-based Feltman’s of Coney Island, and recently expanded its product offerings by launching a bacon line. It was a long and winding road leading up to the most recent rollout and the Quinns’ drive to succeed is inspired by a commitment they made to honor their youngest brother, Jimmy, who died in the terrorist attacks on Sept. 11, 2001.

As kids, Feltman’s was a household name throughout the Quinn family. At that time, nobody would have guessed that two of their own would realize the dream of bringing the brand and the premium hot dogs back to Brooklyn and to hundreds of high-end grocery stores. Joe and Michael did just that, starting in 2015, despite a decade-plus delay in plans that made their resolve even stronger. Six years later, on Aug. 1, 2021, with the support of nostalgic fans known as “Feltman’s Army,” the Quinns launched what they considered to be the next logical product: Feltman’s Bacon.

“We used the same kind of blueprint for what people love about our hot dog products, which isn’t just the story behind it, but the fact that it’s all natural, it’s a thicker cut and that we’re veteran-owned,” said Joe Quinn, a graduate of Army West Point and a veteran who served in Iraq and Afghanistan for about 10 years.

And developing a new product in the ultra-competitive bacon market wasn’t as tough as the brothers thought it might be.

“We went to bacon festivals about two years ago and it was like the same three brands were there and that just seemed so boring and commoditized,” Quinn said.

Successfully developing Feltman’s new product and launching it was about a two-year process simplified by using the same approach for bacon that worked when the brothers relaunched Feltman’s hot dogs, including partnering with co-packers committed to using Feltman’s proprietary seasoning, sourcing high-quality raw materials from US-based pork producers and utilizing natural hardwood smoke. 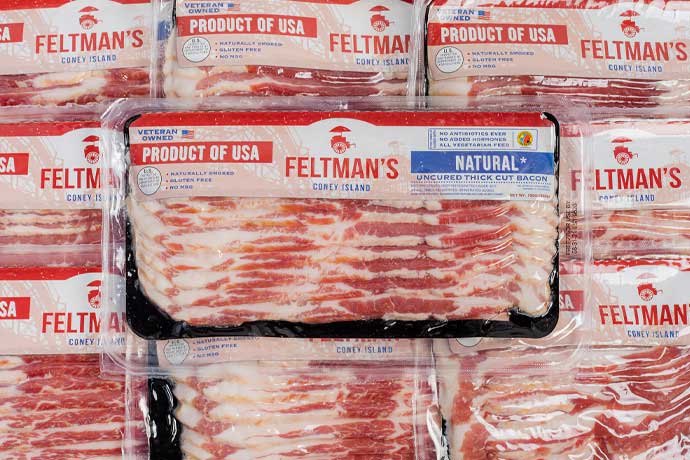 “Being able to offer a product that is naturally smoked in a smokehouse is the biggest difference and most important part,” Quinn said.

The Quinns take pride in the new bacon for a variety of reasons, including its thick slices – each 12-oz package includes seven or eight slices.

“It’s cut like bacon should be in size and thickness,” Quinn said. “A lot of other bacon is pumped with water and it looks good in the package but it’s limited in offering a really good slice and a really good bite.”

Having co-packing agreements with a variety of processors to produce the brand’s hot dogs and a line of brats and hamburger patties for years paid off when the Quinns were ready to add bacon to their lineup.

“Having those co-packing relationships in the industry for hot dogs, we were able to have a head start versus five years ago, when we were begging people to agree to minimums of 500 (hot dogs), because we were paying for it using my credit card and just trying to make it work.”

Within the first month after the August launch of the bacon, only selling it online, the product sold out and a second production run was made. Quinn pointed out that especially with the rising price of pork, having six to nine packs of Feltman’s bacon delivered to a customer’s doorstep is comparable in costs to purchasing a package of thick-cut, premium, all-natural bacon at most grocery stores, especially in the New York market. The Quinns hope to make the bacon available to retailers after a year or so of selling it online. Its e-commerce strategy is building toward offering tailgating and barbecue combination packages delivered to consumers’ doors.

“And then, one by one, as we have conversations and reviews with retailers; we hope to start pairing and conveying to customers, ‘If you love our hot dogs, grab our bacon,’ knowing it is within the same brand and philosophy. That is, that it’s natural, it’s premium, thick cut and it’s naturally smoked in a smokehouse,” Quinn said. “I would say if you love our hot dogs you’re really going to love our bacon.”

He pointed out that Feltman’s bacon is differentiated from many others due to its natural attributes, including being made from antibiotic-free pork produced by US-based farmers. So, when it came time to narrow down the possible co-packers, they required the companies they worked with to have access to natural, ABF pork and using bellies that are hardwood smoked.

Additionally, Feltman’s of Coney Island bacon’s packaging spells out what Quinn said are the key selling points of the new product. He said after assessing the competitive landscape, it was easier to create a package that stood out and spotlighted what was most distinctive about Feltman’s premium bacon.

“If you go to any store and look at the bacon, you’ll see there’s a lot of black and very dull colors used for the packaging. Being a veteran-owned company, our colors are red, white and blue,” he said.

As a patriot and a food lover, hot dogs and bacon are symbolic of a country where food is celebrated, Quinn said.

Long before the bacon 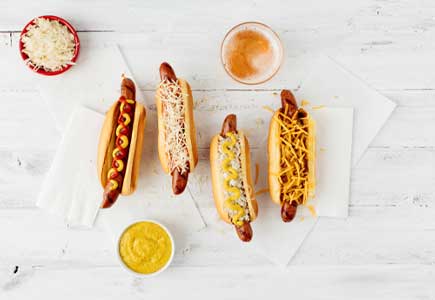 Founded in 1867, Feltman’s of Coney Island began with an entrepreneurial German-born baker who sold pies along the storied coastline from a rolling cart. That baker, Charles Feltman, soon discovered a new market after he created a sliced, elongated bun in his bakery and put a German sausage inside it. Feltman quickly converted his pie cart to accommodate the newly launched fare. Legend has it that this marked the birth of the hot dog and Charles’ innovative food was all the rage among throngs of beachgoers seeking an on-the-go, hand-held meal without the mess. Well over 10,000 hot dogs were reportedly sold the first summer they were introduced more than 150 years ago. That modest hot dog cart evolved over the years to what would become known as the world’s largest restaurant on the Brooklyn beach, reportedly selling up to 40,000 hot dogs a day at its peak for a dime apiece.

“If you’ve ever been to Eataly in New York City, it was like Eataly on the beach; this gigantic Bavarian beer garden with 18 grilling stations serving sausage, hot dogs and making extravagant shore dinners and seafood platters,” Quinn said, adding that Charles Feltman’s empire closed in 1954, 44 years after the founder’s death.

Because of the Quinn family’s deep roots in Brooklyn, Feltman’s of Coney Island always had a special place in the hearts of Joe and Michael, loyalty that was based on fond memories of Feltman’s handed down to them from previous generations.

“If you have been to Coney Island more recently it just really captures your imagination of what it must have been like in the heyday of Coney Island and Brooklyn, with Charles Feltman being at the forefront of it,” Quinn said. 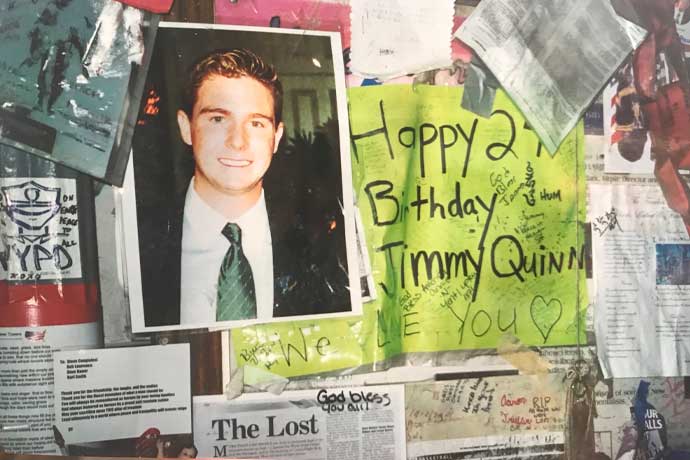 A memorial to Jimmy Quinn at McSorley's

It’s those images and the stories about the iconic eatery that were with Joe and his two brothers, mostly from their grandfather, a native of Brooklyn and an everyday customer at Feltman’s. The nostalgic lamenting over the closure of Feltman’s and the void it created for what their grandfather insisted was a “real” hot dog, stuck with Joe and his siblings as they grew up.

“We always had this plan that we were going to bring Feltman’s back,” he said. Part of the plan was to relaunch the brand after Jimmy, his 23-year-old brother worked for a few years and saved up some money working in finance. That was in 2001 and Jimmy was working at a financial services firm in the north tower of the World Trade Center on Sept. 11. Tragically he was one of the thousands of victims who lost their lives in the terrorist attacks.

The Quinn family was rocked by the loss and everyone’s plans changed. After 9/11, Michael eventually went to work in the hospitality industry while Joe, went on to graduate from Army West Point, and served two tours of duty in Iraq and another tour in Afghanistan. Joe returned to Brooklyn in 2015 after his deployments and the two brothers rekindled their plans from more than a decade ago. They made their commitment official at New York’s historic Irish bar, McSorley’s.

“We shook hands that night and said, ‘What the hell, let’s do it – let’s bring Feltman’s back and do it in honor of Jimmy,’” Quinn recalled.

After about two seasons of selling hot dogs at a stand in Luna Park, where the original Feltman’s of Coney Island was located at 1000 Surf Ave., the brothers moved from the location after 2018 to focus on distributing its products to retailers and by using e-commerce. In 2020, the new Feltman’s inked a deal to sell its products to Whole Foods, with distribution that has grown to more than 300 stores in the Eastern United States. Feltman’s is also the official hot dog of the NHL’s Florida Panthers and the Quinns have also developed a following known as Feltman’s Army, made up of fans of the brand’s past history and future ideas, one of which was, “What’s next after hot dogs?”

When developing new product ideas, the brothers agreed that the next logical addition to the brand’s lineup was bacon.

“I think there is no product that is more American than a hot dog,” Quinn said, “but I feel bacon has become a very close second especially in the last 15 to 20 years. I think it’s a perfect time to bring a little character to bacon and a little Americana to bacon.”

A bun slicer who worked at Feltman’s of Coney Island, Nathan Handwerker, went on to start a hot dog stand of his own on Coney Island in 1916, selling hot dogs made using a family recipe, for a nickel each, half the price charged at Feltman’s. Competition combined with the Great Depression ultimately led to the demise of Feltman’s of Coney Island. However, Handwerker would grow his business exponentially to a national brand – Nathan’s Famous. Ironically, today it operates a hot dog stand at the original location of Feltman’s on Surf Avenue.