We use cookies to provide you with a better experience. By continuing to browse the site you are agreeing to our use of cookies in accordance with our Cookie Policy.
Home » Keeping it regal

In many ways, White Castle is regarded as royalty in the ultra-competitive fast-food burger segment. With 362 restaurants in 14 states, it may not be the biggest chain compared to its Goliath-like competitors, but White Castle is leading the pack in longevity, industry firsts and creating a cult-like following. Celebrating 100 years in business in 2021, the chain holds the distinction of not only being the first-ever fast-food hamburger chain, but also is credited with inventing restaurant carryout; becoming the first fast-food chain to sell 1 billion burgers; and creating what it calls “the crave” among its legions of customers (cravers) whose appetites for the 2-inch, square sliders is seemingly unrelenting. The still-family-owned company employs about 10,000 workers, most of who work at the restaurants. About 210 of those work in the company’s new headquarters, much of which is devoted to paying homage to the company’s rich history and its loyal cravers.

While the original White Castle restaurant was built in Wichita, Kan., the company’s home base moved to Columbus, Ohio, in 1934 where the company bought an existing building on 18 acres to use as its headquarters for $50,000 cash. It has since been razed. The newly constructed home office opened just before the COVID-19 outbreak and soon after its ribbon cutting, most employees were forced to work from home until recently.

As the company, and the fast-food industry, has evolved over the years the family-owned company remains committed to continue operating certain aspects of the business that were priorities of its founders while adapting strategies that address today’s market. For example, the company has a history of vertical integration, which still includes owning and operating the bakeries and meat plants that supply its restaurants and retail business. White Castle’s vertical integration has been a cornerstone of the company since day one, when Billy Ingram and his business partner, Walter Anderson founded the company.

“That has always been a part of our approach to managing quality and being customer focused,” said Jamie Richardson, vice president of marketing and public relations who is married to one of the fourth-generation owners, Kate. Richardson, who’s been with the company for 22 years, said, “Having our own meat plants – we’re starting to call them our ‘slider provider’ meat plants – has been huge.”

One of those plants, in Zanesville, Ohio, is celebrating its 20th year in operation, the newest of the company’s three meat-processing facilities including one in Lebanon, Ind., and the other in Orleans, Ind. In keeping with the company’s tradition of maintaining operational control of its manufacturing, White Castle runs three frozen retail plants in Covington and Louisville, Ky., as well as one in Vandalia, Ohio, in addition to two bakeries where it makes buns, in Cincinnati and Rensselaer, Ind.

When discussing innovation within the company, whether it’s a new menu item or a new corporate initiative or policy, Richardson said the mindset is to try anything within reason and to learn from what works and what doesn’t work. That empowerment is a priority of Lisa Ingram, great-grandaughter of the founder who now serves as president and chief executive officer and holds the distinctive title of “Slider Queen.”

“We’ve tried a lot of things and not all of them have worked, but a lot of them have,” Richardson said. “And Lisa has really led us down a path of ‘let’s try a lot of things, but not everything.’ It really is our Slider Queen who gets all the credit for doing all these things in the spirit that her dad and her grandfather and her great-grandfather brought to the business and keeping it alive and making it relevant to the challenges of today.” 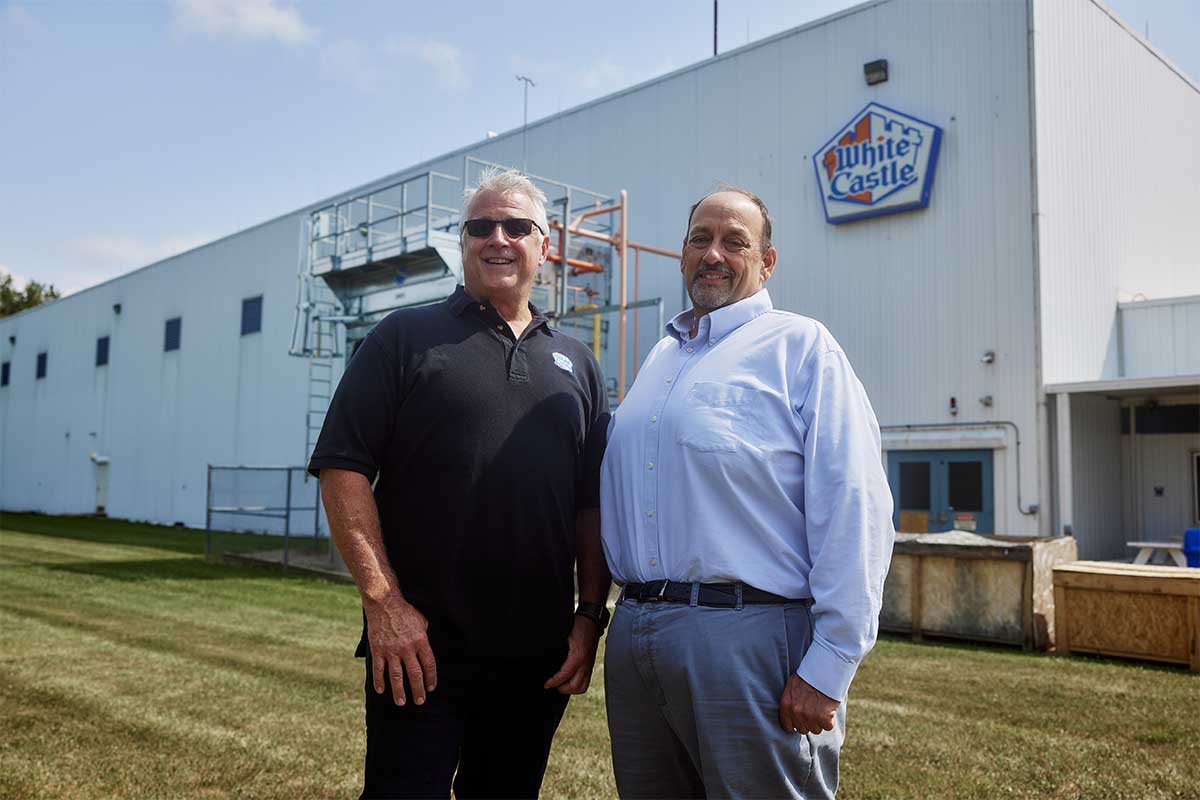 Approximately 80% of the products manufactured at the 70,000-square-foot Zanesville beef plant, which sits on a 10-acre plat, are patties that are shipped to one of White Castle’s 362 restaurants. The other 20% of beef processed at the facility are beef logs that are shipped to the company’s retail plants, where they are sliced, and made into frozen, microwaveable sliders sold in multiple box sizes at a growing number of retail stores. Whether sliced or unsliced, logs are typically processed using three lines with one additional line available for backup. Log boxing is also part of production on designated shifts.

“The meat logs are shipped directly to our retail division because they have their own slicing operation inline, which is why we don’t slice for them,” said Dave Rife, the chief manufacturing officer who oversees White Castle’s eight manufacturing facilities. About 40 employees work at the Zanesville plant. Rife is the oldest of the fourth generation working in the family-owned business, which includes his cousin Lisa Ingram.

The company works with a network of beef companies that ship frozen, 60-lb blocks to the plant. Raw product is stored in a freezer before the blocks go to an unboxing area and are conveyed to the first of two grinding operations using grinding and blending equipment from Weiler.

“The yield is phenomenal,” Rife said of the results of the double grinding and blending process. “The primary grind is a larger grind and the meat goes into the mixers in a process that lasts about 15 minutes.”

Next, the product goes to the final grind, using a much smaller plate, and it is extruded using White Castle’s customized, five-hole horn, that is equipped to create the square logs and the tell-tale holes that run the length of every log.

“In the final grind, that’s where the magic happens,” said Al Swearingen, plant manager, as the more finely ground beef is extruded through White Castle’s proprietary meat horn, which creates the signature five holes that run the length of every log and are part of every patty. The idea to add the holes was suggested in 1947 by an employee at what then was a meat plant in Cincinnati. The practice was adopted and implemented in 1951, as a means of allowing patties to cook faster and reduce the weight of each patty. The meat horn was patented in 1954.

Like the patented beef horn, a log saw, which was also custom-made by White Castle engineers, cuts the logs into uniform, 37-inch lengths before they are conveyed to a spiral freezer prior to slicing. Swearingen said that crust is formed when the logs’ internal temperature is chilled to 26˚F and an external temperature of 0˚F.

“After about 20 minutes, we get a nice crust on them for our slicing operation,” Rife said.

After the logs move to one of three Thurne, gravity-fed slicers, the patties go through foreign material detection before the interleaving process, which separates each patty. Then they go into a stacker and the stacks are manually boxed for shipment to the restaurants. Unsliced logs destined for retail processing are conveyed to the log-boxing line.

“We put six logs in each box, palletize them and send them to the retail plants,” Rife said.

“You’ve got to make sure you get the exact same flavor profile, whether you’re in a restaurant or you’re getting them from the grocery store.” 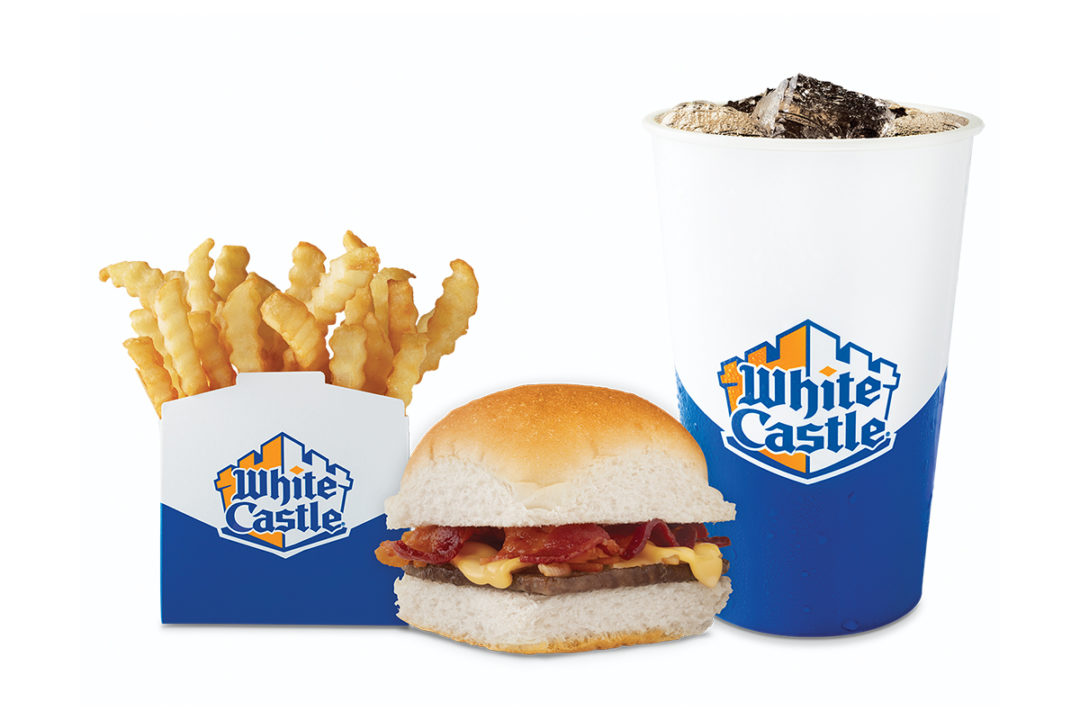 
The Zanesville plant and the facility in Orleans are almost identical in operation and throughput, however it employs about 24 more people than Zanesville. With a footprint of about 48,000 square feet and employees numbering about 40, the Lebanon plant was renovated about three years ago to produce beef logs exclusively for the retail division. Retail production at Lebanon is supplemented by the two sister plants and Swearingen said it takes all three producing logs to keep up with retail demand. Logs produced at Lebanon go through the identical process as the other two plants, differing only in that it uses an impingement freezer, and the logs are not sliced.

“And then it’s a very automated process for packaging and palletizing,” Rife said, adding that robotic technology is an important part of the renovated plant’s operation.

Across the three meat plants, operations typically run at about 80% of capacity with Zanesville running a single production per day followed by a nightly sanitation shift. The other two facilities run two processing shifts per day and nightly sanitation.

Currently, the beef processing plants produce more than 45 million lbs of product per year, with room and capacity to grow.

“We’re thinking far enough ahead that we can continue to feed the souls of cravers everywhere by having enough capacity to do what we need to do,” Rife said.

Fortunately, just before COVID-19 became prevalent, Rife and his team decided to renovate the Lebanon facility, making its production dedicated to log production only.

“We assessed everything and agreed that if we were to go down this path, we can increase our throughput by around 28% to 30%, by just focusing on making logs every day,” Rife said.

“We don’t look for suppliers, we look for partners,” Rife said.

As Coca-Cola’s longest customer at 100 years, Rife said it is that type of longevity the company looks for in all its partners.

“When I look at our suppliers on the meat side, these are all people that we have been associated with for a very long period of time.”

The target fat content of each burger is between 26% and 27%, which in earlier years was confirmed by continuously sampling product from the mixer and waiting for the in-house lab results before proceeding.

“Now, with technology, we have equipment in place that tells us in real time what’s going on,” Rife said, “so we just keep cranking, but we still pull some samples to ensure the equipment is doing what it’s supposed to.”

Additionally, random product samples are also taken of the raw material coming into the plant and throughout all the processing steps to prevent and detect pathogens in the supply chain. Maintaining optimum food safety throughout the production process was part of White Castle’s culture from the beginning, Rife said.

“My great-grandfather started this company in ‘21. It was really important to him to change the mindset of people, especially around ground beef,” he said. “Because back then, Upton Sinclair’s book really painted a bad picture of the meat processing industry, and so he really felt that the best way to control the quality of what went over that counter is to control the quality of what comes in the back door. That’s why we have our own meat plants. That’s why we have our own bakeries. Those are the key ingredients in our slider.”

Finished logs and patties are held at the plants for three days after production, until all lab testing confirms the frozen products are safe. 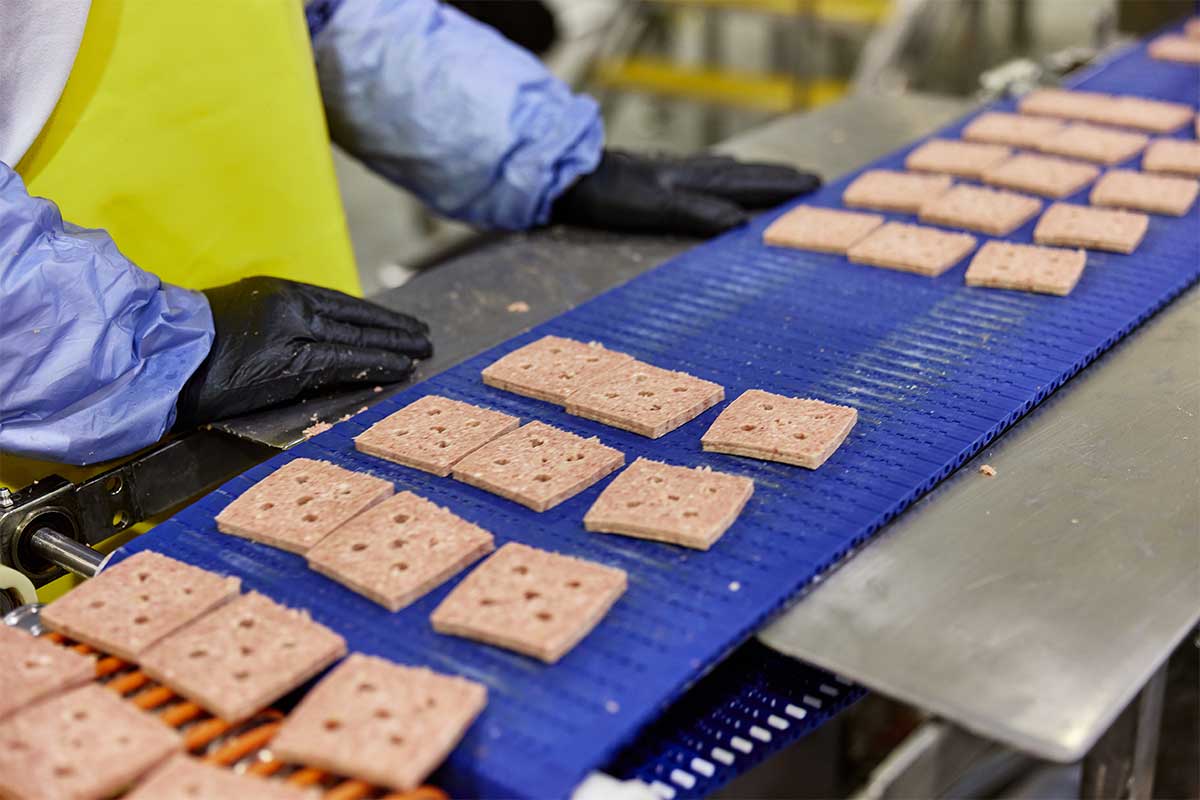 White Castle’s meat operations were challenged by the pandemic. Employee protection measures included PPE, installing partitions in work and break areas, requiring temperature checks at entryways, social distancing practiced wherever possible and designated cleaners targeting high-traffic and touch areas. When positive cases were confirmed, contact tracing was used to ensure workers were safe. In terms of demand, initially the company saw a sharp drop off in sales as many consumers stayed home.

“And then it rebounded like a hockey stick,” Rife said. “It took off.”

He said the company’s cult-like following proved the loyalty of its customers.

“They sought it out wherever they could and if they couldn’t get it in the restaurant, they went to the freezer aisle in the grocery store and vice-versa. It has kept us very busy.”

Swearingen said variations in the market and consumer behavior may fluctuate but the company’s production remains predictable. The manufacturing part of White Castle’s meat business is based on simplicity and is focused on producing one raw product with no other ingredients. Beyond that, focusing on efficiency and improving operations is the emphasis.

“It’s a simple process,” he said. “We run one product for White Castle so it’s all about safety first, quality second.”