When a meat processing plant is located in a small town where the livestock population vastly outnumbers the citizenry, it might seem that company has cornered the local market. Yet for Ed Ryan, the 64-year-old owner of Ryan’s Grocery & Processing, there’s never been a time to rest on his laurels.

Jordan, Mont., had a small meat market when Ed’s parents, Jim and Jessie Ryan, bought it and reopened the business as Ryan Grocery in 1958. There were at least three expansions including a new building across the street from the original store.

After his father passed away in early 2021, Ed took over and continued to run that original business and a 7,000-square-foot custom processing plant located about a mile away and continued to operate it as the family had always done – with heart.

“We never felt that being the only game in town gave us any license except to serve our community,” Ed reflected. “We always had it in our heart that we had to treat people right and give them the best products and service that we could.”

Putting this into perspective: Jordan has a population of about 250 and is the only municipality in Garfield County, which has a total population of about 1,200. There is an estimated beef herd of 87,000, about 17,500 sheep and lambs and a big game density that most hunters would only dream about.

So how could a county of 1,200 residents get its own municipal swimming pool and what does that have to do with the Ryan’s business? 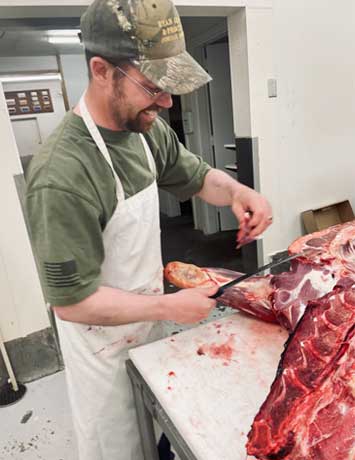 “In the 1970s, I had a brother who drowned while fishing,” Ed said. “My dad worked tirelessly to get our town a swimming pool and raised the money for years to get it built. Sometimes a meat business has to be more than just a company that provides meat.”

With about 25 employees combined, the two Ryan facilities are located a half-mile apart. Their fairness, moderate pricing, work with 4-H and FFA groups, the local school and community service earned the company the 2005 Small Business of the Year Award from Montana State University (for firms in the 30 to 50 employee range). The award was not just for food companies, but included all businesses in the state.

The business has also become the workplace of choice for local students in search of their first job.

“We have had a lot of kids take their first job at our grocery store,” Ed said. “In fact, some of them came to work here 30 years ago and are still with us and still exhibit enthusiasm about what they do and what their efforts mean to our town and county.”

The processing plant, managed by Ed’s son Reid, is fully equipped to handle custom work for farmers, ranchers and sportsmen. The custom processing business represents about a third of the Ryan’s volume. The balance is earned at their retail store where their hand-cut meats and cured products rank among the best in the state.

Ed, who is also a past president of the Montana Meat Processors Association (MMPA), notes that they have won hundreds of awards for smoked and cured products in competition. The family business abides by old-fashioned ideals and turns out items that have ranked from champion to grand champion in 10 different categories and they have earned the Best of Show title for their products in state competition six times. Ryan’s has also taken home plaques in the American Association of Meat Processors Cured Meat Championships.

They are also known for their snack sticks, summer sausage, breakfast sausage, bratwurst, smoked hams and turkey and jerky. And, in hog-short Montana, they produce a bacon that brings customers in from all over the state. They have to purchase pork bellies from the commodity marketplace. Meats are sold both at the processing plant and at the retail store.

“They buy it (bacon) as fast as we can make it,” Ed said. “We make a regular, peppered and a Cajun bacon. We also offer a cottage bacon.”

Ryan’s was named the MMPA’s Best Processing Plant in 2015, which is an honor for a facility that operates under a custom exemption program overseen by the Montana Department of Livestock.

The retail store includes its own in-house bakery and a fully stocked deli department, where hot meals, chicken and sandwiches are prepared and ready for takeout.

Ryan’s Grocery & Processing has also hosted two conventions for the MMPA and shares its expertise in processing with other processors throughout the state, particularly in the area of food safety. 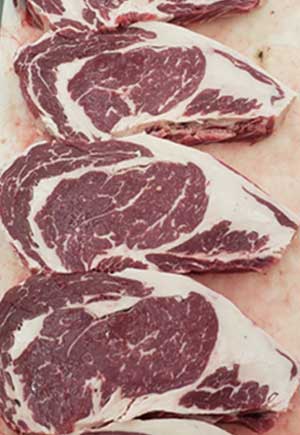 Now, when Ed says they hosted the MMPA convention, you have to realize that they invite everyone in town to attend. It’s a way to acknowledge that their enterprise is truly a lynchpin in the community.

Ed recalls working at the store since the age of five, sweeping floors and taking out the trash. He feels it’s been rewarding to be able to stay home and make a living, noting “we’re not getting rich, but it’s a good life.” He believes strongly in reinvesting in his operations to give the community the products and services it needs and deserves.

Game processing remains another vital aspect of the service Ryan’s provides. Ed estimated they process about 700 deer and about 300 elk in a typical year. It’s often that they don’t conclude their value-added processing for items like sausage for hunters until February.

The demand for local processing services for custom animals has skyrocketed, which suggests that the plant may have to reluctantly turn some customers away or delay their work until months later.

Yet Ed Ryan remains a leader in Jordan, working to assist every other business and realizing that if local residents didn’t have a local food facility that gave them the meats and service and other groceries they needed, they would have to go elsewhere and would also likely purchase other supplies there as well, hurting the town’s few small but resolute business operations.

“I’m hoping that our family legacy of serving the community will continue for many years to come,” he said.