We use cookies to provide you with a better experience. By continuing to browse the site you are agreeing to our use of cookies in accordance with our Cookie Policy.
Home » Old World expertise

Imagine a small meat processing company that actually has customers crying about its products. To verify this reality, you need to go no further than Sarasota, Fla., where there is a world class, Old World-style family business known as Geier’s Sausage Kitchen.

Five generations of the Geier family, whose roots go back to the small town of Selb, Germany, trace their meat skills and beam with pride at their journey to prominence in the world of small meat companies.

Karl Geier and his wife Gisa recall their family’s venture into the meat trade when nearly a century ago, their farm family began harvesting livestock and making their own sausage for others who raised livestock.

“They began selling a lot of meat and my father opened his own meat shop in 1929,” said Karl Geier. “I began working in the meat business at the age of 14 and learned as an apprentice the skills of the meat business. In 1959, I came to the United States to work for a large sausage company in Michigan.

“By 1981, I was ready to move to the warmer climate in Florida. Since I had a non-compete agreement with my former employer, Florida was a good choice. We built a small shop on a mini golf course and sold our sausages there. We later bought the whole thing.”

The small shop has seen numerous expansions in their enterprise in southern Sarasota and eventually they constructed a plant in the northern part of the city where they moved most of their production to keep up with demand.

Karl, now 82, even returned to Germany to earn his master sausage maker diploma, known as the Metzgermeister, over a two-year period. Then he went full bore into meeting the demands of European expats and former servicemen and women who had been posted in Europe and longed for the taste of authentic Old World products they learned to love abroad. 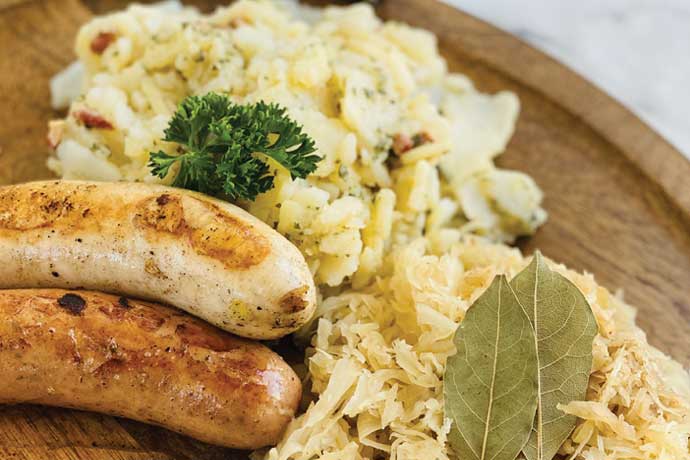 It is the nearly 7,000-square-foot retail shop that attracts customers with astounding varieties of specialty sausages and products with the flavors of Germany, Poland, England, Hungary, and even South Africa. German music is piped into the retail store and is played on the phone if their customers wait on hold. The retail area is a tourist destination unto itself, but the variety shoppers can peruse is an experience unto itself.

Three generations of the Geier family work under one roof and Gisa, who ran the retail side of things for years, asserts that she is not ready to retire until she teaches the rest of the family and employees “everything I know.”

Geier’s Sausage Kitchen leaves shoppers in awe with the quality and vast selection of its specialty meats. One gentleman from New York tasted their weisswurst 30 years ago and was crying tears of happiness because it reminded him of authentic German sausage he never thought he’d be able to enjoy again outside of Germany.

Karl and Gisa’s daughter, Caroline Martin, serves as the company president. Their granddaughter Sierra Chadwick, who earned a degree in agricultural economics from the University of Florida, is the office and plant manager, while another granddaughter Nakita Chadwick handles the retail area, marketing, customer communications, special events and is known as the company spokesperson.

Under this close-knit management team, Geier’s Sausage Kitchen, and its corporate entity Geier’s Choice Meats, has grown tremendously, but because of COVID-19, has dropped to 38 employees.

If the dazzling plethora of products they produce, which can be seen and ordered on the website geier-sausage.com, doesn’t adequately introduce customers to Geier’s specialized offerings, they should plan to visit one of the many tourist attractions and events, or even theme parks, in the area where their authentic and beloved brand of meat abounds. Marketing, almost as much as their special products, is a true strength for this family-owned-and-operated meat processing business.

Karl says about 70% of the company’s business is now wholesale, thanks to their product popularity at events like Oktoberfest, a two-week-long promotion they used to stage in their retail store that attracted as many as 6,000 attendees in a single day. Now they just supply festivals nationwide, the largest being an Oktoberfest in Florida that draws over 40,000 people. For that event they supply authentic items such as bratwurst, schweinshaxe (German-style pork shank), German potato salad and more.

All about the marketing 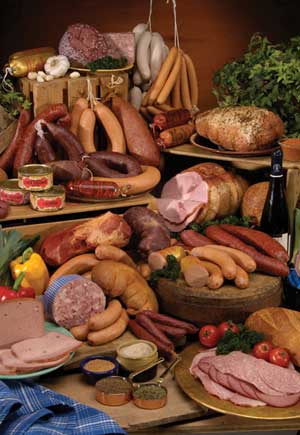 It’s also the little things in marketing that have blazed Geier’s trail to success. For example, when Hurricane Irma devastated much of Florida years ago and tornadoes also took their toll, Sierra came up with the Natural Disaster Survival Kits, featuring shelf-stable items like snack sticks, jerky and even canned meats.

Geier’s Sausage Kitchen makes no fewer than six canned meat items, including blood sausage, souse (head cheese) and pâté. They also do their own canning and handle all fulfillment for orders from across the country and across the globe.

Still, the family company relies on its real juggernaut to grow through a combination of small batch processing, their own spices and an important thing called freshness.

Karl describes the philosophy best, “For so many years we never bought spice blends for our sausages...we made our own. We hand-blend our spices from all of my father’s recipes. We believe in small batch processing. For our retail store we make our sausages in 100-lb batches. That way they are fresh and taste like nothing else around. They are not long shelf-life products, and we want to guarantee that you are getting genuine family recipes that only taste best when they are made fresh.

“For our wholesale customers, like theme parks and some that we privately label for others, we make 1,000-lb batches because of the logistics and volume they need,” he said.

Karl explained that they do buy individual spices in bulk and also use premade spice blends for other companies’ sausage that they produce for private label, an agreement point they include in a contract with each company for whom they produce sausage.

The youngest generation member of the family is helping the company speak to the next generation of consumers through targeted marketing. Nakita explained, “Many of our customers are older and the younger generation is looking for quality meat products with no fillers, glutens and other additives. They suggest we clean up our label to let shoppers know all the ingredients. The truth is that our products have never had those things. Now it’s a matter of telling them on the label.

“Then, there are many Old World-style products that the younger shopper has never been introduced to, so we use our gift and sampler package program to include some things they have never tried or even heard about. It’s our way of promoting some specialty products to folks who may have never even heard of them,” she said.

Geier’s Sausage Kitchen has a full deli line, including homemade salads and sandwiches. They buy frozen European specialty breads and baked goods that they finish baking in their retail shop. The family business features 50 brands of beer, many from Europe, and other hard to find items like Anspach brandy candies and snack items. They are also beginning to market their own spices, seasonings and marinades at retail.

Over the horizon, they see an expanding demand for more fully prepared and ready-to-heat and ready-to-eat meal selections that would complement their curbside pickup service.