With Salmonella being a leading cause of foodborne illness, science-based approaches are being taken to find and prevent the pathogen in meat and poultry. These steps are being carried out by meat and poultry processors, food and meat scientists from land-grant universities, food microbiologists and regulators from USDA and state meat and poultry inspection programs. Attention to food safety has been spurred on by the COVID-19 pandemic over the past 16 months.

“As far as making people sick and posing economic threats to the meat and poultry industry, it is at the top, it is the most widespread foodborne pathogen,” said Jonathan Campbell, PhD, extension meat specialist and associate professor of animal science at Pennsylvania State University, in University Park, Pa. “As long as we eat food the way we do, meaning sometimes meat and poultry is undercooked, there will be issues. Part of the reason for that is that so many of us are so far removed from knowing anything about our food or where it comes from.”

Salmonella is among the most widespread foodborne pathogens in part because there are so many types, referred to as serotypes, said Jasna Kovac, PhD, assistant professor of food safety and food science at Penn State. It also easily moves from animal hosts to people.

“It can survive pretty much everywhere in the environment, but its main harborage is in warm-blooded animals,” she explained.

But when talking about detecting and preventing Salmonella, it is important to remember the products meat and poultry processors are producing.

“We produce a raw poultry product, not a sterile product,” said Marty Ewing, DVM, and director of technical services at Sanderson Farms, in Laurel, Miss. “If raw poultry is abused, not stored properly, cross-contaminated in the kitchen, there is a chance of growth of pathogens, including Salmonella.”

The company uses a mixed approach, multiple interventions, to detect and prevent Salmonella. They include commercial vaccines, antimicrobials that are part of the birds’ feed, and vaccines that are customized to local Salmonella strains or serotypes.

“We also test in our live bird houses. Before slaughter takes place, we check flock health,” she explained. A flock that is ill might have a higher bacteria load. Breeder birds are vaccinated. Injections are given for specific serotypes of Salmonella.

“We vaccinate the broilers, we try everything,” she said. “We can’t say statistically that one specific approach has the greatest effect, because we have very low numbers to begin with. Sometimes the vaccines help, sometimes not,” Ewing said.

Brian Williams, director of processing at Sanderson Farms, said many steps exist through the process of producing poultry products. But a major emphasis is continuous product flow, to eliminate backup where cross-contamination could occur. Interventions take place on lines after feathers are removed, and during evisceration and chilling. Peracetic acid is used as an antimicrobial before birds go into the chiller, then post chiller during the cutting process, he said. The antimicrobial is also used to sanitize equipment.

Chilling plays an important role in preventing Salmonella, he said. “Chillers should run between 35˚F and 38˚F. Our chillers run 33˚F to 34˚F, with birds into the chiller quickly within 25 to 30 minutes. Also, rinsing and cleansing the birds is important,” Williams said.

Ewing notes 2,600 serotypes of Salmonella exist, but only about 20 cause sicknesses in humans. “That’s why vaccines are geared to specific serotypes,” she explained.

“In the plant, it’s proper chilling of the birds, then multiple antimicrobial applications, and finally, good product handling and cooking to 165˚F.” 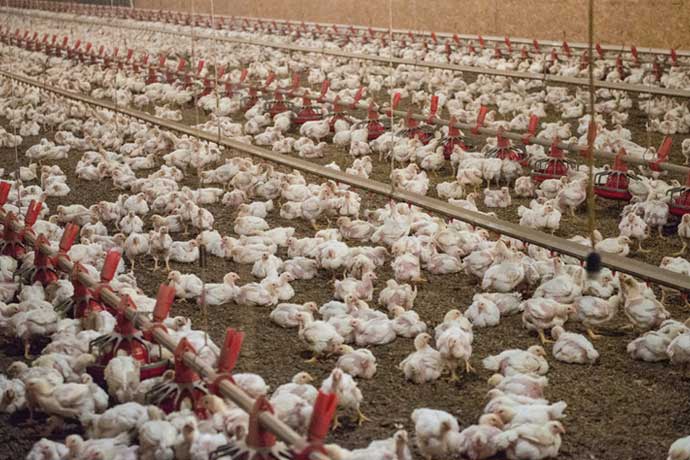 There are a number of interventions available to protect poultry from Salmonella including vaccines and antimicrobials in the birds’ feed. (Photo: Sanderson Farms Inc.)

Testing for Salmonella on poultry and meat products, as well as in plant environments, is also important, and the technology has gotten better, said Luke Thevenet, a microbiologist, and the Pathogen Technical Sales Manager with 3M Food Safety.

One capability that has advanced is 3M’s Molecular Detection System.

“Additionally, USDA lists the Molecular Detection System as their method in the Microbiology Laboratory Guidebook for Salmonella, Listeria monocytogenes, and Campylobacter testing,” he said.

Thevenet pointed out both product and environmental testing are important for finding and preventing Salmonella in meat and poultry products. The company offers eight different assays, including Salmonella, E. coli, STEC and Campylobacter.

“The 3M Molecular Detection System uses isothermal DNA amplification, paired with bioluminescence for detection,” Thevenet explained. With easier data analysis, this gives the customer more power to make the right decisions concerning Salmonella and other pathogens. “Testing feedback is important, because it can show if your hazard analysis is working. If you’re getting a lot of positive results, you might have to adjust your HACCP plan,” he said.

Salmonella is primarily associated with meat and poultry, as well as some non-meat food items, but it has also been linked to production environment contamination, according to Cargill Protein in Wichita, Kan.

“Salmonella is more ubiquitous across many food categories, including non-meat and non-poultry than other bacterial pathogens,” noted Angie Siemens, senior manager in Cargill’s food safety, quality, and regulatory department.

She said Salmonella is found in the production environment of livestock and poultry but does not create clinical illnesses in animals. Routes to animal infection include contamination, insect bites, and surface contamination of hides. Salmonella can transfer to lymph nodes in beef and swine, as well as other internal sites in poultry.

She said Cargill uses organic rinses at various points throughout the beef and harvest processes as part of a robust food safety system that also includes HACCP plans. “But Salmonella does not always reside on the carcass surface like E. coli O157:H7, making it more difficult to mitigate with sprays.”

While government performance standards have been relied on to reduce Salmonella levels, Siemens said they have not been as successful.

“Unfortunately, performance standards recently have not reduced illness rates attributed to meat and poultry products in the US to meet 2020 Healthy People goals,” she said. “Industry is partnering with government and research institutions to investigate alternatives for reducing levels of Salmonella in live animals and poultry, and the subsequent production process. In addition, alternative measures and standards, including use of enumeration have been recommended by the industry for government consideration.”

Cargill is supporting pre-harvest research to understand how animals and birds get contaminated with Salmonella. Kovac also points to a lot of research to develop improved methods for detection.

“While testing for Salmonella can be helpful, enrichment tests don’t indicate what the load of Salmonella is,” Kovac said. “Knowing the quantity of the pathogen is important. Knowing the concentration of the pathogen can also help industry find out what is causing an increased amount above what they usually see. This information can be used to investigate and apply appropriate corrective actions.

“Detecting and controlling Salmonella should be a priority,” she said. ”Cooking [their meat] to a safe temperature is a good way to eliminate it, but not all consumers want or know how to do that. So, it really falls to the processors to take all the steps they can to control Salmonella before the meat gets to the consumers.”

On the government side, USDA’s Food Safety and Inspection Service (FSIS) created a “roadmap” to deal with Salmonella. Last year, the food safety community didn’t meet the national public health goal for reducing Salmonella illnesses, and FSIS is committed to meeting that goal by 2030. USDA steps include modernizing inspection systems, moving to evidence-based verification and additional micro-sampling – that’s already happening with pork and poultry. But FSIS is experimenting with modernizing beef slaughter inspection, allowing targeting and control of Salmonella in live animals, as well as beef products.