We use cookies to provide you with a better experience. By continuing to browse the site you are agreeing to our use of cookies in accordance with our Cookie Policy.
Skip To Content
Home » Process Expo to feature meatball processing in this year’s production line demonstration

“This is the fourth production line that FPSA’s meat suppliers have organized for PROCESS EXPO,” said Bob Campbell, chairman of the Meat Industry Suppliers Alliance (MISA) and president and general manager at Marlen Inc. “Since being launched at the 2017 edition of the show, the Production Lines have been by far the trade show’s biggest draw aside from the exhibits as it provides our audience a chance to see how each component works in concert with the other pieces of the line for maximum efficiency and productivity. Furthermore, this is not just a passive demonstration. Each participating company has expert staff on hand to discuss their equipment and how it might fit into the attendee’s production or packaging plans.” 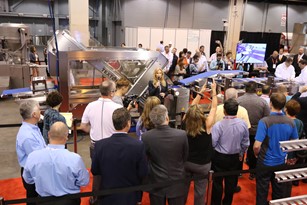 “Our meat suppliers have taken the lead in the Production Line program over the last four years,” said David Seckman, president and chief executive officer of the Food Processing Suppliers Association (FPSA). “In fact, the live Production Line concept was the brainchild of one of the MISA members who saw the clear value that these lines would bring to food manufacturers who attend the show. Instead of the theoretical discussion we could have regarding a static exhibit, these lines are a much richer example of the practical applications these technologies have to offer.”

For more information on the production line demonstration or to register for the show go to www.myprocessexpo.com.