We use cookies to provide you with a better experience. By continuing to browse the site you are agreeing to our use of cookies in accordance with our Cookie Policy.
Home » Starbucks still sees opportunity in food

SEATTLE – “Strategically, we are a beverage-first company,” said Kevin R. Johnson, the president and chief executive officer of Starbucks Corp., during a conference call with financial analysts to discuss the company’s first-quarter results. But that doesn’t mean food isn’t important to the company and it showed during the quarter.

Rosalind Gates Brewer, chief operating officer and group president of the Americas, said the company’s goal is to align with customer preferences and understand how those preferences are trending.

“What this is also allowing us to do is to make great coffee as well because now we’re learning how to match and pair coffee with great food and beverage items so that we bring together both a food and beverage combination,” she said. “So, the work ahead of us by no means minimizes food. Actually, we see it as a golden opportunity for us to just further expand our presence and create quality food attach items to go along with great coffee.”

Such insights into consumer food and beverage preferences supported the company’s earnings during the first quarter of fiscal 2021, ended Dec. 27.

“This quarter, mobile orders represented 25% of US company-operated transactions in Q1, up from 17% before the pandemic, providing clear evidence that our initiatives are resonating with customers,” Johnson said. “We continue to see average ticket meaningfully higher than pre-pandemic levels, driven by group order. A combination of increased beverage attach, premium beverage mix, increased customization and upsizing, and an all-time high food attachment all drove US ticket growth of approximately 19% in Q1.”

He added that food outperformed company expectations during the first quarter and was driven by the strength of breakfast wraps, the Impossible Breakfast Sandwich, holiday bakery items and cake pops. 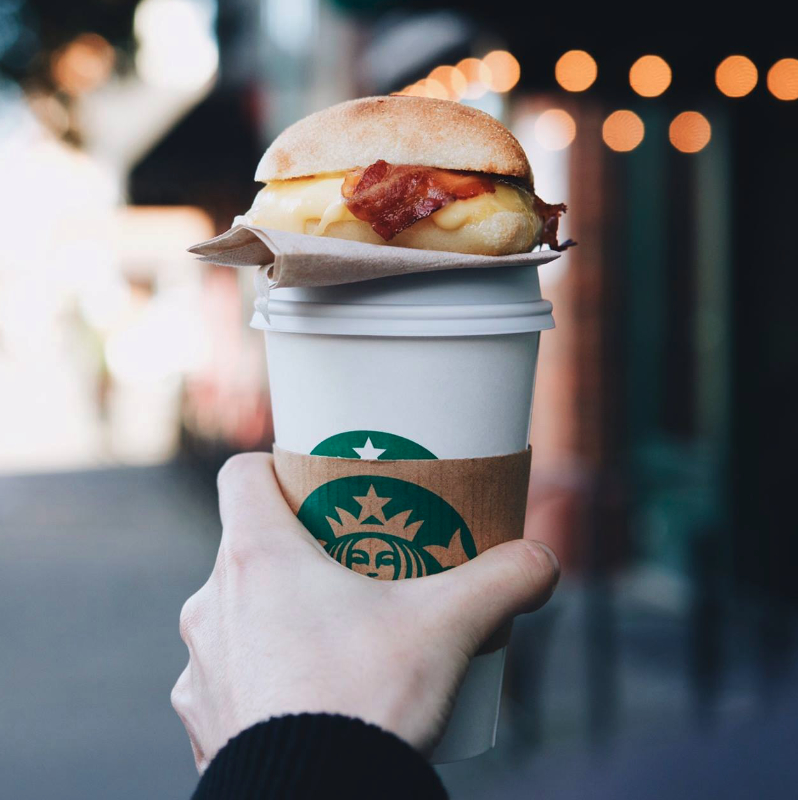 The 6% decline in revenue was an improvement when compared to the fourth quarter of fiscal 2020, which saw sales fall 9%.

“Even with pandemic-related business disruption in the latter half of the quarter, which significantly reduced our ability to offer in-store seating, with over 60% of our US company-operated stores offering limited seating as we entered our fiscal Q1, comparable store sales improved in October, building on the momentum we saw in the prior quarter,” Johnson said.

Patrick J. Grismer, chief financial officer, said the company expects to report a US comparable store sales decline of approximately 2% for the month of January, representing an improvement compared to the 8% decline the company experienced during December 2020.

“Then as we lap material adverse COVID-19 impacts in the month of March, we expect US comparable store sales growth of approximately 5% to 10% for the second quarter,” he said. “This is consistent with our previous outlook that we would achieve full sales recovery in our US business by the end of Q2 with a two-quarter lag beyond that before we expect to see full margin recovery.”

A dynamic Starbucks is experiencing during the pandemic is as overall store traffic has fallen the average amount per ticket has grown. Johnson said the shift had to do with group ordering.

“We feel confident that those kinds of innovations are going to keep that ticket higher than what we’ve seen in the past.”

It was also announced during the call that Brewer will be leaving the company to become the CEO of Walgreens Boots Alliance. Rossann Williams, president of Starbucks’ North America retail business, and Brady Brewer, executive vice president and chief marketing officer, will take on the responsibilities of the COO, Johnson said.