In 1996, Iowa-born John Walke was growing tired of working in the oil industry in Midland, Texas, and was looking for a change in careers when he got a call from a meat inspector.

That meat inspector, who happened to be his older brother Bill, told him there were a few meat plants in Oklahoma whose owners were getting ready to retire, and perhaps the two of them should consider investing in one of them.

“My brother and I both had families to feed, and I kind of missed being around trees and water, so we looked at several of those businesses for sale that would support both of us and purchased the former H&H Meat Co., a 5,000-square-foot state-inspected facility built in 1976 in Claremore, Oklahoma,” John said. “When we bought the business, the former owners stayed on for a month to help get us up and running. We put out a sign on the shop just off fabled Route 66 that read Walke Brothers Meats. We added a smokehouse in 2000 and a retail store in 2003.”

In 2007, Bill retired and John changed the name of the business to Walke Meat Co.

“Eight years ago, we went from state to federal inspection,” John said. “We started with one employee and have now grown to 22.”

In 2016, Walke Meat Co. completed its third addition to the facility to expand further processing operations.

“We haven’t had a problem obtaining good employees,” he said. “We try to seek out people with good work habits in an industrial environment and can teach them the rest. We all have to have people with good work ethics and we communicate with all of our staff daily regarding everything from processing schedules, regulatory changes, product ideas and seasonal trends.”

The plant was predominantly a custom processing house when the Walke brothers took it over, but John said they put all the custom work under inspection. He said that retail, wholesale and private labeling has expanded, but the main thrust has still been on custom processing. 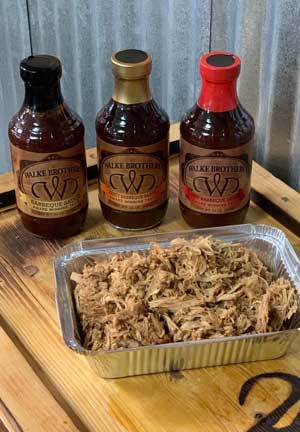 By spring of 2021, John, 58, said that the 9,300-square-foot plant will be expanded again, to over 12,000 square feet and explained that the retail area of about 900 square feet will be moved a bit closer to the highway and will double in size.

In the retail department, customers can find award-winning (160 local, state and national awards) hams, bacons, smoked sausages, snack sticks, jerky, bolognas and wieners, as well as hand-cut or trimmed chops, roasts and steaks, and other specialty items made in-house. The Walke name means made by the Walke family.

So, what’s so special about the Walke Meat Co.? In a word...diversification.

“We still have our custom-under-inspection trade that represents about 30% of our volume,” John explained. “With our expansion we foresee that growing to 60%. We do a large amount of private labeling, somewhere around 50 accounts, which has also broadened our further processing of cooked products, and we learned from that new ways to grow other aspects of our company.

“When my son Lyndon returned from the Air Force in 2008, he came back to work with us and said, ‘Dad, we make a lot of bacon for our custom accounts but don’t make any for our retail customers,” John said. “Well, we started making our own bacon and now bacon is king in our shop, in flavor varieties and in volume.”

John said although they still sell sides and quarters of beef and pork, the company has put more emphasis on meat bundles. He feels they are more economical for customers and have become more popular and put less strain on an already busy slaughter schedule. The shop also offers customers gift cards and does a booming trade in its smoked products.

“We had moved into the HRI trade very heavily and successfully,” he said. “Until two years ago we were pretty satisfied with revenue being distributed evenly between retail, wholesale and (custom) processing, but due to changes in our wholesale market we were able to focus more on growing our retail and custom operations. This put us at a huge advantage in March of 2020 when the virus mess started. The phone kept ringing and we were able to take on the increased demand for services in custom processing as well as keeping up with demand in our retail store.”

He pointed out that the company processed as many as 200 smoked roaster hogs a year, but that number declined to about 20 last year because of the COVID-19 pandemic which decreased the amount of group events. He sees a rebound in that area because, he said, “here it’s always barbecue season.”

Walke Meat Co. also features its own brand of rubs and barbecue sauces that enhance the flavor of beef, pork, seafood, poultry and even vegetables.

“Our barbecue sauce has been a family recipe since the 1950s,” John said. “It’s actually five generations old and we sell it through a lot of grocery stores as well.

“But the biggest thing we learned about the meat business is that among small, family-run companies, there are really no secrets and there are no enemies. We have all learned to share our ideas and get solutions for our processes and products from each other.”

“I learn even more than I share here and at the AAMP,” he said. “My wife Michelle, Lyndon and his wife Ashley attend conventions as well.”

Lyndon, also a former OTMPA president, says he’s impressed and feels it is a continuing education school for new product, processing and managing ideas. He found there is no intimidation there...just genuine sharing.

John said the upcoming expansion will allow the firm to better separate the beef and hog processing operations and grow the retail area as well.

“Sometimes our strategic planning gets very simple...we lock the doors and turn off the phones,” he said. “Then we can communicate with everyone in the company what we are doing and why, and ask for their ideas. We want to leave no one out of the future and remind them of why we are successful...it’s having quality people and products...but that’s nothing without the knowledge and the pleasant service that accompanies it.”

The future portends a greater emphasis on internet sales and upgrades to the company website, walkebrothers.com. But having a good reputation and delivering on customer expectations is paramount. When a rash of wildfires swept through the area last year, John donated to firefighters and first responders as a way to show appreciation.

He also believes that with the expected increase in production capacity and modern equipment, the company will revisit the wholesale side of its business.

“We are not planning to jump into anything,” John said. “We’ll take little bites to see what works best. Sometimes our staff has to learn to inform customers of what we can’t do; for example, batch sizes. It’s just not economical for us to do a lot of the smaller jobs that we used to, but people have been respectful of that and are willing to work with us.

“One of the rewarding things about having a retail store is being able to allow our customers to steer us in a particular direction regarding our products. Over the past several years this has been particularly important as far as ready-to-eat and value-added products are concerned, which has carried over quite well into our custom and private labeling business. We’ve been blessed following that philosophy.”