Automation is often described as a job killer, but robots and packaging machines are filling roles in the meat industry that are hard to staff and can even be dangerous for workers. Packaging companies are not just equipment peddlers selling palletizing robots anymore.

Automation and robotics are integrating data collection and vision systems to minimize human error and reduce the need for repetitive tasks by workers by putting machines right on the line next to their human operators.

The pandemic has put even more focus on automation in processing plants to improve food and worker safety.

Harpak-Ulma, based in Taunton, Mass., has developed a new master bag system that integrates the primary packaging of individually portioned meat and groups those products into large orders, known as masters, for shipping. The machine sorts the packages by SKU and groups them into masters without a human hand touching the often-delicate package.

In some cases, worker retention is poor in meat packaging because the tasks are repetitive and sometimes considered menial. Finding enough labor is already a significant and ongoing challenge for meat packers and losing people to the tedious tasks of packaging only creates more staffing problems.

Boredom can be a job killer as well.

Retraining and relocating workers out of those types of jobs and into more skilled positions helps processing companies maintain their workforce, Weddleton said.

When Craig Souser, president and chief executive officer of JLS Automation, York, Pa., is asked at conferences about automation and robots taking away jobs, his response is simple.

“The jobs that we automate are not jobs that anybody really wants to do for long,” Souser said. “They’re in bad environments in terms of human habitat. It’s cold. It’s wet. It’s repetitive work.”

Meat and poultry packaging makes up a big portion of the customer base for JLS. The company is focusing on improving vision systems so they can streamline inspections and improve product grading.

By integrating more machine-learning technology into vision systems, JLS can effectively incorporate better grading into the pick-and-place task of packaging.

In effect, having the machines do inspections instead of the people.

“People are somewhat inconsistent, a vision system is not,” Souser said. “If we had a machine learning capability incorporated, then it would just get better and better.” 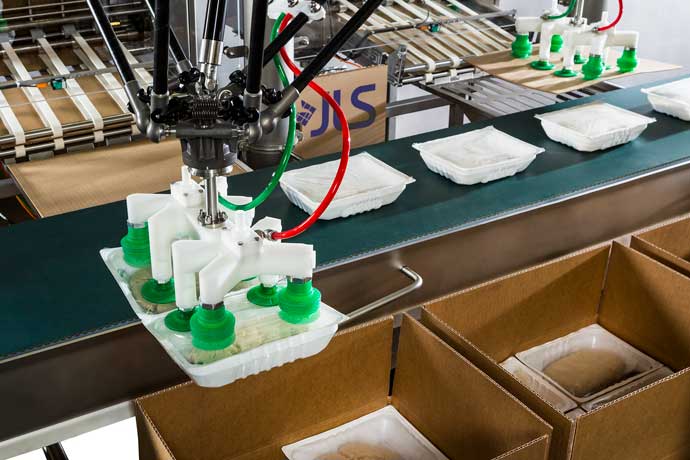 When dealing with meat and poultry, standardizing the finished product can be one of the biggest challenges to packaging – meat differs in size, shape, texture and fat content. Unlike an automotive production line, food production is full of irregularities.

Not all chicken breasts or beef loins are alike.

The variability of meat makes it difficult to create predictability in packaging. Vision systems can be configured to recognize these subtleties and standardize packaging systems.

Kansas City, Mo.-based Multivac has innovated its vision technology to automate the weighing, portioning and packaging tasks. The company is using X-ray technology in vision systems to determine the fat content of a chicken breast to help predict the weight. This helps standardize the calculations of placing two to three chicken breasts into a package and effectively speeds up production, said Waheed Chaudhry, automation project sales engineer at Multivac.

Multivac is not only capitalizing on equipment innovation, but also using the data gathered by its machines to maximize efficiency.

“We’re not just a hardware provider, now we’re also a software provider,” Chaudhry said. “We have become a full-line system solution provider along with basically a data management company to give you the oversight you need to look into your production level.”

Data is king these days in all industries. The key to efficient automation systems is effective data management. Packers and retailers want to understand their processes and avoid bottlenecks on production lines, Chaudhry said.

Multivac is creating its own software so packers can manage production better, adjusting where human error or inefficiencies are slowing or stopping the line.

By developing their own software, Multivac has been able to vertically integrate their equipment with their data collection to create a seamless transfer of information from the beginning to the end of a packaging line, Chaudhry said.

“Automation doesn’t necessarily mean a robot. Automation means looking at a full line and looking at all their processes along the way and making that as efficient as possible without creating bottlenecks,” Chaudhry said. 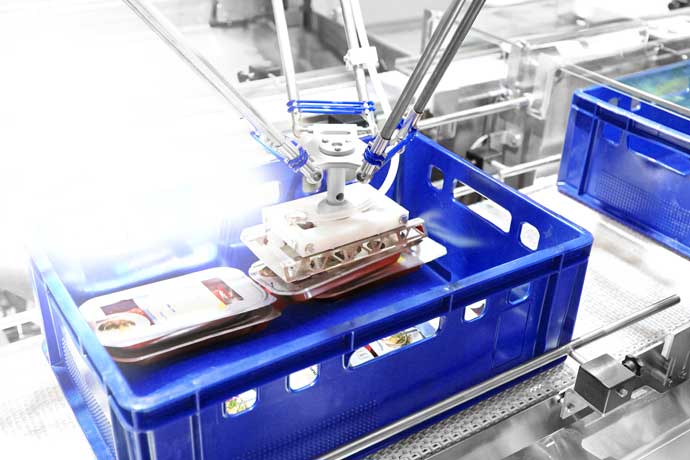 Access to data can be important because it can stop problems before they start.

More sensors on packaging machines and better data management could alert operators to a machine that is vibrating too much or is working harder than it should, said Jorge Izquierdo, vice president of market development for PMMI, The Association for Packaging and Processing Technologies.

In the past year, remote access to packaging machines has helped automation companies service equipment without entering a facility – a big advantage during a pandemic, Izquierdo said.

Traditionally robots in production facilities are relegated to the end of the line where the repetitive nature of palletizing and packaging is a sweet spot for a machine to work 24/7. Often these robots are separated from workers with protective barriers or in cages to protect people from a machine that could injure or even kill with one movement.

Cooperative robots – or “cobots” – offer a way for machines and operators to work together safely in the same space.

“If you get too close to them, they slow down. If you touch them, they stop,” Izquierdo said.

Cobots allow for workers to oversee operations without having to do the heavy lifting or repetitive labor, while also being able to direct the tasks that need to be accomplished. Cobots are not fully integrated in meat packing facilities yet, but the expectation is more of a mix of operators and robots co-working together in the future, Izquierdo said.

“Robots will be taking over the parts where you want to keep operators safe.”