We use cookies to provide you with a better experience. By continuing to browse the site you are agreeing to our use of cookies in accordance with our Cookie Policy.
Home » Bacon Report: Makin' bacon better

Bacon, a perennial favorite, is getting even more love as a pandemic comfort food.

With indoor dining limited in many parts of the country, consumers have been bringing home the bacon, literally. For example, for the week ending March 8 before the coronavirus (COVID-19) spurred shutdowns in the United States, retail bacon sales were down 6% from the previous year, according to data from Chicago-based market research firm IRI. A month later, for the week ending April 5, sales were up 47% compared to 2019. Later in the year, IRI reported that retail sales of bacon spiked 29% from the March to mid-July time frame in 2019 to that same period in 2020.

Pete Bruehl, marketing manager for meat, poultry and seafood for Amcor Flexibles, North America in Oshkosh, Wis., confirmed the appeal of bacon in this unusual era.

“Our sales of bacon machinery are at the highest level in the last five years, indicating a robust demand for packaged bacon,” he said. “Retail, in particular, has been strong due to COVID-19 impacts, and foodservice is now starting to catch up. Bacon is not just for breakfast anymore. It’s being used for multiple meal applications, toppings for burgers, pizza, and salads, and even in desserts as consumers are experimenting with bacon in donuts, ice cream and chocolate.”

“Bacon has always been in demand, and it’s been very common in the industry. But in the last year or so, it has definitely picked up,” he said, adding that bacon provides taste and comfort even in budget-conscious times. “Bacon is a commodity, people can afford it. It is typically a lower-priced meat, but always great tasting, and versatile.”

With such strong demand, processors are packaging bacon, including fresh, raw bacon and precooked bacon, in varying forms for visual appeal as well as shelf life and safety. To start with, those who produce fresh, raw bacon must contend with inherent product attributes.

“Grease is a primary challenge for our processors as ‘grease in the seal’ can cause leaker issues,” Bruehl pointed out.

Favret also pointed to challenges associated with this kind of meat product. “Although bacon has been packaged for years, there are a lot of inconsistencies and differences in the product. The slices are different, thickness is different, the sizes are different. In our equipment, we just make sure that we account for deviations in the product size, footprint, and the draft of the package to ensure we can handle the tolerances we see,” he said.

Today’s bacon packaging also reflects marketplace trends and consumer demands. The push for sustainability is one example. For instance, as part of its company pledge to reduce total packaging material by 25 million lbs by this year, Austin, Minn.-based Hormel Foods Corp. redesigned the packaging for its Black Label packaging. That redesign has saved 91,000 lbs of packaging material, according to company information. 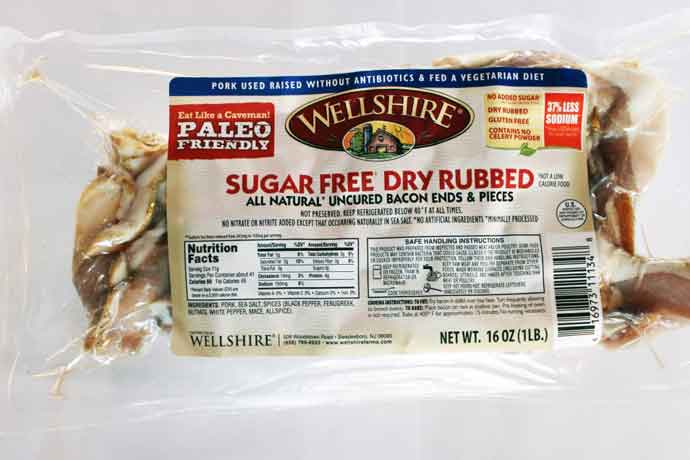 Along with package waste, food waste is another issue on the minds of consumers and food manufacturers. Of its films for precooked bacon packaging, Bruehl said, “The nylon allows for excellent puncture resistance while the EZ Peel creates an easy open package for multi-serve or zipper applications, helping to reduce food waste in the home.”

As in past years, convenience and ease of use are other drivers for improvements in bacon packaging as more consumers are cooking (and cooking with) these products at home. Easy-opening features are important to bacon users who don’t want to reach for the scissors when opening bacon packages.

Bacon as a meat snack is also broadening the category and, with it, packaging types. The paleo- and keto-friendly Epic Provisions brand from Austin, Texas, offers single-serve bars such as Bacon and Egg Yolk Bars and Beef Apple Bacon Bars along with hickory smoked Bacon Bites sold in a resealable pouch. Over in foodservice, the demand for meat snacks is evident in the 2020 rollout of Snackin’ Bacon from Dunkin’; seasoned half slices of bacon are sold in a sleeve for on-the-go munching.

If uncured and sugar-free bacon products are newer entries in the category, plant-based and vegan bacon products are also mixing things up. The Lightlife brand of meat alternatives, based in Turners Falls, Mass., has added new Smart Bacon vegan strips, with 14 strips to a 5-oz box.

Meanwhile, other improvements in bacon packaging are based on improving production efficiencies for processors.

“Additional issues are ‘board in the seal’ or board cut issues for the L-board used in 1-lb applications. Amcor can solve this by combining the ionomer sealant with an enhanced nylon exterior to provide increased puncture resistance and seal capabilities,” Bruehl said.

Integrated systems also streamline bacon packaging. Reiser, Canton, Mass., offers a bacon packaging system that includes printed and registered top and bottom films, EZ Peel films and flexibility for the production of packages with or without L or clear bacon carry boards. Processors can use the system to make both bulk and retail packaging on the same machine.

Amcor recently added to its bacon machine line with a new Flexvac 6-18 Classic for ease of operation and manufacturing simplicity. Amcor also offers a system for high speed thermoforming lines with up to 75 packages a minute. Both systems are designed to keep pace with high speed slicing equipment, Bruehl said.

Among its bacon systems, Harpak-Ulma offers tray and seal solutions and a range of TFS and thermoformer machines.

“For the productivity or required output, it would be the TFS 500, 600 or 700 model depending on desired capacity,” Favret said.