Paul Kiecker was named Administrator of the US Department of Agriculture’s Food Safety and Inspection Service (FSIS), the agency regulating meat, poultry and processed egg products, in March of this year by Secretary of Agriculture Sonny Perdue. He supervises a budget of over $1 billion, and he has spent most of his 32-year career working for the agency. He joined FSIS in 1988, and like some other previous administrators, he started out at the bottom, as a food inspector.

“I held virtually every job between inspector and administrator,” he said, mostly in field operations.

He served as deputy district manager in Madison, Wis., and district manager in Madison and in Springdale, Ark. He also served as executive associate for Regulatory Operations and Deputy Assistant Administrator for the Office of Field Operations, the major focus on inspection, in Washington, DC. And he worked as a Compliance Investigator and a Supervisory Compliance Investigator with the Office of Investigation, Enforcement and Audit.

Is this experience important?

“Yes, I think so, I know what FSIS is supposed to do, and I’ve worked in the agency at every level,” he said. 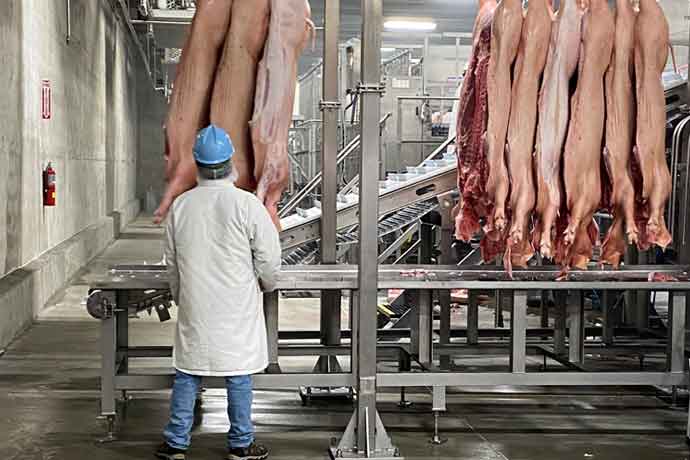 MEAT+POULTRY: You were named Administrator of FSIS at an interesting time, to say the least, the onset of COVID-19 in the United States. How has the pandemic affected what FSIS is doing and trying to do?

Paul Kiecker: Yes, I started on March 12. Our No. 1 priority has been to make our inspections in the field and conditions for our inspectors as safe as possible. We’ve followed all the CDC and OSHA guidance. At first, if you remember, it was a bit confusing. No face coverings. Then we were cleared to wear them. As inspectors and regulators, we haven’t missed anything. Obviously, with the plants operating at a slower speed and level, that helped us out. We also got help from the AMS (Agricultural Marketing Service) and APHIS (Animal and Plant Health Inspection Service), volunteering to work the slaughter lines and processing lines. Up to now, a plant never had to slow down because we weren’t available.

M+P: Did the agency have to change anything?

Kiecker: No. Our people are on patrol. If inspectors didn’t get to every task, they picked the highest priorities. We’ve collected the same number of samples, there’s nothing we missed there.

M+P: Has COVID-19 affected the agency’s concentration on pathogens, allergens, and foreign materials?

Kiecker: No impact on those areas, like ante-mortem, post-mortem, humane handling, HACCP verification, SSOPs (sanitation). We did have to adjust products that had been going to restaurants and school lunch dried up, so instead they have moved into retail.

M+P: How about keeping in touch with the inspectors? Other changes?

Kiecker: Communications with inspectors has become an even bigger issue. Three times a day, we let them know what changes are taking place. We’re also trying to connect our field operations employees (inspectors) more closely. Equipment is very important, face masks, shields, hand sanitizer. Dr. Mindy Brashears (Under Secretary for Food Safety) and I have been going to many plants in the last couple of months. The plants don’t look the same – face shields and coverings, people standing in hallways with sanitizer, temperature checks. We have communications with managers at plants, and the regulated establishments can call us, as well. We told plants with COVID-19 procedures in place that our people follow their procedures, as well. If plants require testing, our people would be tested, too. It didn’t take very long for the plants to put these procedures in place.

M+P: With all that’s been going on, have you been able to move forward in your priorities, in what you would like to do? Didn’t you oversee the modernization of the agency’s new poultry and swine slaughter inspection systems?

Kiecker: Yes, we’ve` been able to move forward. Our new poultry inspection, our new swine inspection is moving forward. With most plants under normal operation, we’re looking to have more plant facilities come under these new systems. We’re also moving forward with the egg rule, that would have HACCP regulations for egg product processing.

M+P: Is FSIS moving toward modernizing beef slaughter inspection like what’s been done for poultry and swine?

Kiecker: Yes, we’re doing that. You generally hear about waivers only in connection with line speeds. But this month (September), a plant is moving forward with a waiver to explore modernization of beef slaughter inspection. It would involve evaluating slaughter inspection based on its Hazard Analysis and Critical Control Point (HACCP) plan for the plant. Obviously, this plan can’t affect the safety of the product, FSIS personnel, interfere with inspection procedures, or conflict with the Federal Meat Inspection Act or USDA regulations. Two years ago, FSIS had roundtable meetings about how beef slaughter inspection could be modernized. We’re going to go forward with rulemaking on this, and we’ll have food safety tests in place for all waivers, we’re not proposing anything that would hurt food safety. Instead of having our inspectors doing quality control, we want them to fully concentrate their efforts on food safety.

Kiecker: In June, FSIS announced plans to expand this testing to all beef products currently analyzed for E. coli O157:H7 and asked for comments due this month (September). The testing in raw beef manufacturing trimmings has been done since June 2012. Verification testing for ground beef, bench trim, and other raw ground beef components wasn’t done because the agency needed to expand laboratory capacity and evaluate data from sampling raw beef trimmings. Those additional products were already being tested for E. coli O157:H7. We’re moving ahead with this expansion because non-O157:H7 STEC is linked to serious, life-threatening human illnesses, including recent outbreaks and a death. We’ve been behind on the ground beef. We will respond to comments and announce when we will start this additional sampling in a Federal Register notice.

M+P: Your predecessor, Carmen Rottenberg, made modernization of FSIS a priority at the agency. Are you continuing that?

Kiecker: Yes, we’re looking to provide more help to small and very small plants. As you know, there have been concerns at these plants for many years about the cost of overtime. It just didn’t start with COVID-19. But I have concerns about making overtime “free.” That would put great burdens on us. There also have been proposals to allow custom plants that produce products for their own use, to sell to restaurants. No, I don’t think people would see that as a good move, taking meat and poultry products out of inspection for restaurants.

M+P: What about interstate shipment of poultry and meat products?

Kiecker: We have the Cooperative Interstate Shipment program, which allows state-appointed, federally trained inspectors. Plants continue under state inspection but adhere to federal food safety standards. Their products can be distributed in interstate commerce, and they can develop new markets for their products. There are seven states in this program of the 27 states in state inspection. Some are in both. “Same as” instead of “equal to” USDA standards. We could adjust if state-inspected plants are selling online outside the state.

M+P: Where do things stand with Appendix A & B, the FSIS documents plants can use as scientific support for lethality and stabilization procedures?

Kiecker: When we did revised versions, there were concerns from small and very small plants. We are working on coming up with a new comprehensive version. In the meantime, plants can use the older versions. At FSIS, we are not in business to put people out of business. Label approvals are down to five to seven days.

M+P: What would you say your top regulatory priorities in food safety are?