We use cookies to provide you with a better experience. By continuing to browse the site you are agreeing to our use of cookies in accordance with our Cookie Policy.
Home » Where heat meets sweet

“Sweet heat” was identified as the No. 1 flavor trend in foodservice for 2020. The flavors of “new chili peppers” came in second in the survey of more than 600 American Culinary Federation chefs conducted by the National Restaurant Association in November and December 2019.

Chefs have been heating up flavors for some time, many trying to identify the next sriracha. The popular condiment – named after the city of Si Racha in Thailand – has a flavor profile of heat with a touch of sweet. It has changed the way consumers view and use hot sauce. It also has seasoning and marinade suppliers exploring new ingredients for innovative formulations that assist meat and poultry processors with participating in this flavor trend.

Sweet and heat are a yin and yang in the flavor world. While being complete opposites in taste, they are actually quite complementary. Combinations such as chipotle raspberry, mango jalapeño and lemongrass wasabi are trending across all food categories and help keep meat and poultry relevant to today’s consumers. The more exotic, the more enticing the sweet-heat combination. At the same time, the protein carrier is a familiar food. This invites consumers to embark on a flavor adventure. After all, we all need a little excitement these days during COVID-19 social limitations.

“These trends reflect Americans’ desires to combine the tried and true with the new and different,” said Hudson Riehle, senior vice president of research for the National Restaurant Association. “This mix of comfort and edginess is a microcosm of the world we live in. Consumers want something different, but want to keep what satisfies them at the same time.”

Research from Kalsec, Kalamazoo, Mich., showed that two-thirds of US consumers are interested in spicy and sweet flavor combinations along with one-half being interested in sweet and tangy experiences. Spicy and citrus came in third place. These consumers crave the complexity that comes from the layering of flavors, and sweet with heat makes a great combination.

Trends that start in foodservice eventually make their way into retail packaged foods. This year that happened a lot faster than expected, as prepared foods companies – including meat and poultry processors – expedited research and development to get on-trend products to market quickly once the COVID-19 pandemic entered our lives and disrupted the way we shop, cook and eat. 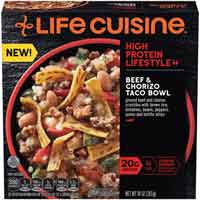 “Based on its incredible popularity, we knew we had to fast-track it, making it available to everyone,” said Angella Green, marketing director.

The chain also offers a grilled chicken bowl featuring a house-made habanero pineapple sauce. Habanero peppers have a fruity, floral and sweet flavor bursting with pungency. These flavors are able to come through when mellowed with the sweetness of pineapple.

Bowl meals are trending in the frozen retail space. They are convenient and allow for many varied ingredients to come together all in one place. There are bowls for every daypart and special dietary needs. Some are hearty while others are more snack worthy. Flash freezing of the different components prior to assembly helps retain quality, but is not necessary, especially in casserole-style dishes. Most contain a seasoned meat or poultry component, with sweet heat and simply “spicy” increasingly popular flavors.

Nestlé USA, Solon, Ohio, has been playing in this space for some time. The company’s most recent frozen bowl meals are part of its new Life Cuisine brand. Made with protein, vegetables and whole grains, these recipes offer a convenient way to explore new cuisines and global flavors, many of which include elements of heat.

The Korean-style barbecue beef bowl, for example, features prime rib beef steak layered with a medley of shiitake mushrooms, edamame, peppers, egg, kale and carrots that is all tossed in Korean-style barbecue sauce. This type of sauce is usually made with gochujang, a red chili paste prepared from Korean chili peppers, which are known for their sweet-heat flavor profile.

Poblano peppers have mild heat and an earthy flavor. They are a fresh, young, dark green pepper. Once ripened, they are typically dried and known as ancho peppers. Anchos possess a rich, dark cherry and raisin sweetness and are hotter than poblanos.

Burke, a subsidiary of Hormel Foods Corp., Austin, Minn., produces an extensive range of fully cooked meat products that frozen food manufacturers may use as drop-in solutions when creating bowl meals and other prepared foods.

“Bowls are a really good eating vehicle,” said Amy Thielking, marketing manager. “There are many benefits with using fully cooked meats, most notably, they are already cooked. The crumbles and toppings are individually quick frozen, so they are free-flowing during bowl or meal assembly.”

“It has just enough heat to give a punch of flavor,” Thielking said.

Meaty bowl innovations were well received at the Research Chef Association’s 2019 Annual Conference student competition held in Louisville, Ky. Taylor’s University in Malaysia took first place for its chicken burgoo meal kit. Burgoo is a Kentucky classic. It’s a hearty stew typically made with a menagerie of wild game, everything from pheasant to squirrel to venison. The bowl meal includes tomatoes and beans, usually lima or black-eyed peas, along with corn and potatoes. The winning team gave an innovative spin to this dish by turning it into an open-faced pot-pie meal, with sorghum crust, followed by a layer of creamy mashed potatoes, sweet heat in the form of a sriracha bell pepper gel, chicken burgoo and spiced carrot puree. The concept was presented in kit format, for the home cook and chef to easily assemble. 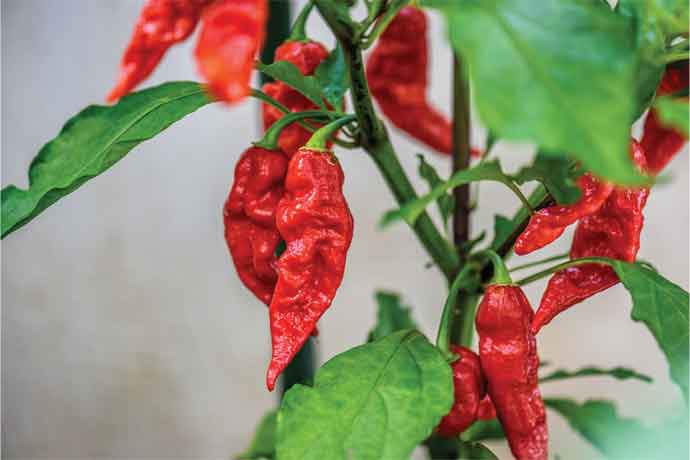 Serrano peppers are similar to jalapeños, just with more heat. Their flavor is described as bright and earthy.

The chiltipen pepper is even hotter. It’s also one of Ben Forbes’s favorite peppers to use in sausages. A self-educated butcher with more than 30 years of experience, he owns and operates Forbes Meat Company, Tucson, Ariz. One of his more interesting creations combines prickly pear and chiltipen peppers with ground rabbit.

“The prickly pears are harvested in Tucson. We dice the fruit into juicy bits and add it to the meat,” he said. “The sweet lends itself well to the spicy chiltipen peppers.”

The sausage mixture includes some clove, nutmeg, white pepper, paprika and a few other “secret” spices.

“We add some pork fat to the very lean rabbit because, well, pork fat makes everything better,” Forbes said. “We also make this sausage with just pork.”

“This sausage starts with roasted tomatillos, poblanos, serranos and green chilis,” Forbes said. “I add some cilantro and a few other spices to kick up the heat, including chiltipen peppers.”

There are many versions of chorizo, with seasonings influenced by the country of origin. And while most chorizo is made with pork and pork fat, there are varieties with beef or blends of meat.

Argentinian chorizo tends to be milder, while Mexican varieties have some kick. If it’s Cuban chorizo, cilantro will be a dominant flavor.

Chorizo may contain an endless variety of peppers and spices, also often along with the fermented flavors of red wine or vinegar. Smoked paprika is almost always added, as it contributes a characterizing vibrant red color. However, Mexicans do make a green chorizo, which gets its color from green chilis and cilantro.

Bell peppers are the only peppers to not have heat. In fact, in this application, they are a source of sweet, complementing the heat of the cheese sauce. Chipotles are made by smoking and drying jalapeños and have a woodsy, smoky flavor.

Aji amarillo peppers have a fruity, sweet taste with some heat, but not too much. Other trending peppers include guajillos, which boast a moderately spicy, tangy flavor with a touch of citrus. Pasillas have a unique, complex flavor that starts out like prune and finishes with a hint of licorice.

All of these peppers belong to the genus Capsicum. There are many species, but only a few commonly used in food preparation; however, there are numerous cultivars and methods of preparing chili peppers, which impacts their unique aroma, taste and degree of heat. That heat comes from the odorless, tasteless, crystalline chemical compound known as capsaicin.

The concentration of capsaicin in chili peppers is measured in Scoville Heat Units (SHU). Pure capsaicin tops out the Scoville scale at 16,000,000 SHU. As mentioned, bell peppers have no heat and score zero on the Scoville scale. At 800,000 to 1,000,000-plus SHU, the Bhut Jolokia pepper, also known as ghost pepper, was certified as the hottest chili pepper on the planet in The Guinness Book of World Records in 2007. In August 2013, it was replaced by the Carolina Reaper, which can be as hot as 2,200,000 SHU.