We use cookies to provide you with a better experience. By continuing to browse the site you are agreeing to our use of cookies in accordance with our Cookie Policy.
Home » Deli Report: Grab and stay

How does the current deli meat market stack up? When it comes to pre-packaged deli meat, it’s a little harder to peg the future than it was a year ago.

For one thing, the coronavirus (COVID-19) outbreak has changed the way people shop. A recent study from C&R Research showed that grocery deliveries jumped 3.5 times during the height of stay-at-home orders, as US shoppers reported making fewer trips to the physical store and/or shopping at off hours. More recently, as the pandemic continues, another study from Cadent Consulting Group and Fetch Rewards found that consumers are starting to go back to brick-and-mortar stores but are concerned about higher prices and an uncertain overall future.

People are also adjusting their eating habits. The research from Cadent Consulting and Fetch Rewards indicated that more than half (54%) of shoppers are purchasing more protein items, since they are eating more meals at home. Those meals include protein-based sandwiches for the work-at-home lunch hour.

The retail deli has been impacted by all these changes, including the service counter and grab-and-go areas. According to research conducted by San Antonio-based 210 Analytics for the International Dairy Deli Bakery Association (IDDBA), traffic at deli service counters slowed significantly during peak pandemic buying and has been slowly inching back up. Meanwhile, dollar sales of pre-packaged lunch meat rose 13.9%, according to data for the week of July 5, with many shoppers seeking a range of package types based on their household size, purchasing budget and preference for certain cuts and varieties.

“Grab-and-go deli package development started to become popular before the pandemic, but with the recent developments, these types of packages are becoming extremely popular with both consumers and delis. Consumers are becoming wary of the contamination risk by both the deli employee and the people standing in line at the deli counter. Having pre-portioned deli meats readily available and that have the appearance of being freshly packaged by the store is highly appealing,” said Christian Uebele, product market manager, thermoforming for Multivac Inc., Kansas City, Mo.

“Consumer interest in grab-and-go deli packaging has been incredibly strong, as consumers are spending less time in the grocery store due to physical distancing needs,” she said, adding that Amcor’s grab-and-go packaging aligns with demand with more variety and package weights than what would be available in the pre-sliced refrigerated section of the store.

Rob Taylor, director of marketing, protein, for Quebec-based TC Transcontinental Packaging, agrees that pre-packaged meats of all kinds have done well at a time when fewer consumers are standing in line at service delis.

“Prior to the pandemic, I believe pre-sliced packaging was showing a very slow increase, primarily just due to convenience and shelf life advantages over in-store sliced. Meat providers have continued to reduce package size to target younger consumers and smaller households, enabling them to continue to grow,” he said.

Still, just because behaviors are different right now does not mean that pre-pandemic trends are irrelevant or that consumers won’t want to return to other attributes in the new normal following the current crisis. Convenience remains a driver of deli meat package design, with benefits in blue-sky times as well as in the current marketplace, when consumers appreciate things like recloseability. 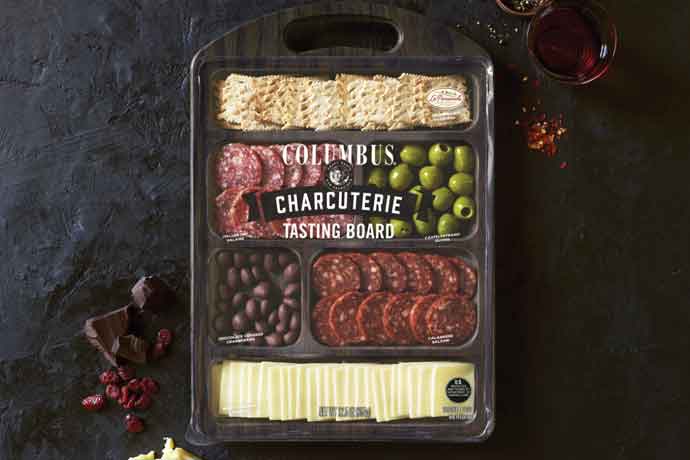 Ease of use and convenience is evident in a range of deli meat packages on the market. One of Hormel’s newest products is its single-serve Natural Choice lunch meats, available in 2-oz resealable pouches. This year, Land O’Frost revamped the packaging for its Premium Meat line of deli meats, with a graphic overhaul and a double-zip pouch.

An offshoot or subset of deli meat packaging is charcuterie, which is also experiencing a boom as people have experimented more with meals and snacks at home. Hormel’s Columbus Craft Meats brand introduced a charcuterie tasting board earlier this year. Designed to make the charcuterie experience easy for customers, Columbus Craft Meats’ salami slices are arranged with cheese slices, chocolate-covered cranberries, olives and crackers in a wood-printed board with a peel-off film top.

Even as easy-open packaging is refined, there is an understanding that it shouldn’t be too easy: tamper-evident or tamper-proof features are important to many deli meat companies. Amcor Flexibles recently won a Flexible Packaging Association award for its SmartTack resealable label with tamper evidence; the solution protects the entire perimeter of the label, versus a peel tab or corner tamper.

If consumers want lunch meat packages that are easy to use, they also appreciate items that are easy on the eyes. According to Uebele, interest in thinner-gauge packaging materials can be attributed in part to the desire for a handmade or more hand-packed look and feel.

“The trend now is for the package to appear like it was created in the back of the deli somewhere, which for an automated packaging line is not so easy to do,” he said.

In response, Multivac has created new package designs that bridge the gap between the look of a hand-crafted deli bag and a traditional zipper package.

Appearance is also important in unsliced deli meats that are often showcased behind the glass at the deli service counter. As shoppers slowly return to the service deli and are anticipated to go back in greater numbers as they become more comfortable doing so, they will likely pick up their discerning pre-pandemic behaviors.

“Gloss and clarity are always important,” Taylor said, adding that Transcontinental’s Envio forming/non-forming films are designed to deliver on those attributes.

A product that looks good can also be good for the planet, or at least better. Smithfield Foods, for its part, offers a line of Prime Fresh deli meats designed to look just-sliced but sold in a minimalist, resealable package that uses 31% less packaging than conventional tubs.

Amcor also continues to work toward the company’s pledge to develop recyclable or reusable packaging by 2025.

“We are commercializing high-barrier separable paperboard trays for easy recycling and increasing the amount of PCR content into our thermoformed trays and films,” Coffey said. He also cited the AmPrima line of recycle-ready solutions with clear barrier package options for printable lidding, vertical and pouch applications for processed meat products.