If the Washington state cherry harvest hadn’t been late the year Jim Cheney was looking for a summer job as an 18-year-old, he might not have ended up in the meat business. Now the successful chief executive officer of Pendleton, Ore.-based Hill Meat Co., Cheney recalled how he applied for work at a meat packing plant when the cherry picking was put on hold.

“I had never seen a slaughter plant, but I told the guy hiring ‘I think I could do it if you showed me how.’ He hired me, then told me I wouldn’t last three days,” he said. “That lit a fire under me, and I wound up working there for 18 years.”

In fact, Cheney became so diligent at his job that his boss later fired the entire crew to make him the foreman. The owner then rehired the crew and turned operational responsibilities over to Cheney. A few years later, he was given the opportunity to buy into the company – Wenatchee Packing Co. – as a minority shareholder. The remaining interest was sold to a dentist who had little operational knowledge in the meat industry. The two did not get along and the dentist called in a business analyst to push his agenda about getting rid of the man who would have been satisfied years earlier just picking cherries.

“My partner didn’t like me and felt I was unqualified because I never went to college,” Cheney said.

“The analyst told him ‘the best thing he could do is to stay out of it and just let Jim run it,’ which infuriated the man,” Cheney said. “Heck, he brought in another consultant who told him the same thing. I decided it was time for me to get out and I went into building homes for a few years. Then I got a call from the owner of a meat processing company in Western Washington; he was broke and was going to close his doors unless I came to work for him. He said he couldn’t pay me much, but that in five years he would be retiring. When the plant was running successfully, he decided he wasn’t going to retire after all.

“Shortly thereafter I received an opportunity to buy 50% of Hill Meat Co. and moved to Pendleton, Ore. Eight years later, I bought the remaining 50% of the business and began running it as my own family operation,” he said.

Now 70 years old, Cheney remembers how he found out after buying into Hill Meat Co. in 1992, that the business was a few months from going into receivership.

“One of the first things I did was to close the slaughter operation,” he said. “There were a couple of major beef plants in our region – Washington Beef and an IBP plant – and I couldn’t compete directly with them. I knew that our facility complemented pork with the sausage kitchen and smokehouse capacity that it had. Because there are not enough hogs raised in the Northwest, we put together a top-notch program with some hog producers and another independently owned harvesting facility in Iowa who raise and harvest hogs according to our specifications. We make sure they have Duroc genetics, are raised on quality vegetarian feed and are humanely raised in a clean, comfortable environment. Then we could focus on making the best bacon, sausage and ham products around.” 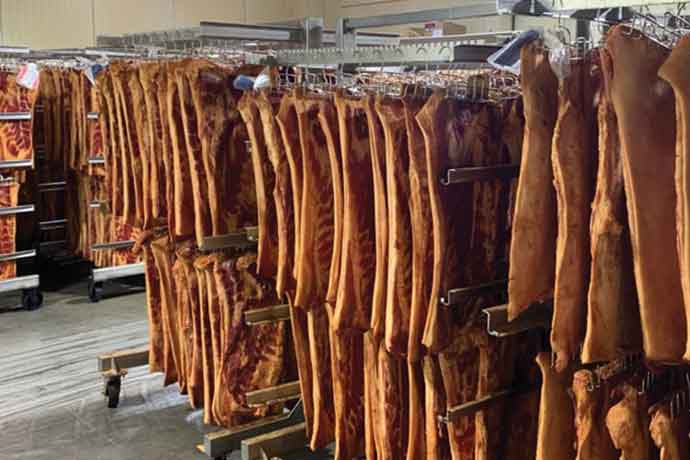 Another huge step was bringing his family into the business. Jim has three daughters, Nicole Sorensen, Kim Sorensen and Caryann Frostad. Nicole is the president and handles banking and financial matters; Kim serves as office manager; and Cary is the resident salesperson, while her husband David runs the processing operation.

“We built a team here,” Cheney said. “The value of a business isn’t just the physical plant, it’s the management. I would put our team up against anyone’s.”

Nicole and her father have served as board members for the North American Meat Institute. She notes that the company is not only family operated, but also family owned.

“We are growing by being progressive in doing what we do well,” she said. “We have become a state-of-the-art company in automation and employees who are a key part of our team. We know that we can only get out of it what we put into it.”

Hill Meat Co. sells its bacons, hams and smoked meats from Alaska to the Mexican border, from Korea to Salt Lake City. Their fleet of trucks delivers most of their product. The market they’ve targeted is the distributor system and foodservice, that serves thousands of stores, restaurants and foodservice operations.

“We spend heavily promoting our brand in cooperative advertising with those who actually sell or serve our product,” Cheney said. “That way we are not competing with our customer base and we all feel that there is a strong partnership that exists.”

The company employs over 100 workers and its website, hillmeat.com, displays a complete list of its products, including a plethora of bacons in varied flavors and packages, filler-free sausages, hot dogs, hams and more. But it also includes a 26-minute video of Cheney telling his personal story of how far he’s progressed over the years under some very trying circumstances.

“I was born with only one ear,” he said. “I think I might have spent nearly a third of my first 15 years in hospitals, sometimes for as long as five months at a time. It wasn’t easy, but those tough times made me a little tougher.” 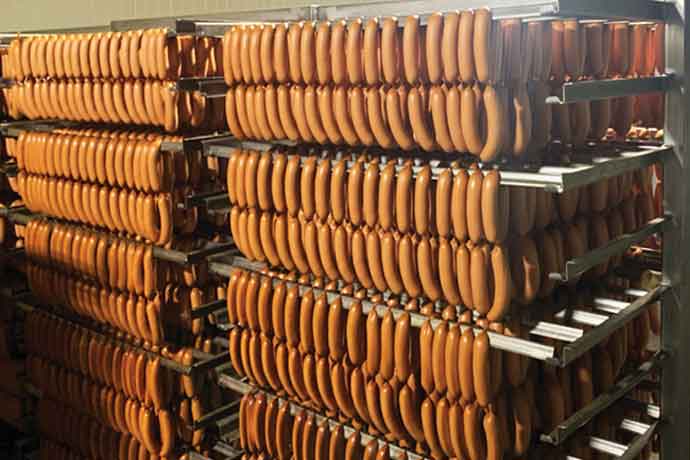 Hill Meat Co. has replaced virtually all of its equipment and systems over the past 10 years, Nicole said. The company recently purchased its eighth Repak packaging machine from Reiser – making it the 1,000th Repak thermoform/fill/seal packaging machine sold in North America by the Canton, Mass.-based supplier.

“We are constantly planning what we will be needing to modernize and have to anticipate those changes and acquisitions a year or two ahead. It’s a constant thing with us. It’s great to be automated, but it is still the worker in the plant and the management planning that makes it happen.”

The plant was about 50,000 square feet in size when Cheney purchased it. In 2018, a complete plant renovation added about 20,000 square feet of cooler space, which freed up more space for processing. He thought the expansion would suffice for a long time but soon they were juggling things to accommodate growth. Now, the company is starting another 20,000-square-foot expansion which should be finished by the end of the year.

“One thing we need to do is not warehouse product, but constantly see product in and product out. We have some departments that run a few shifts, but the majority of our operation is done in a single shift. We are looking at the possibility of going to a second shift.

“One important thing is that we deal in a perishable product, but we have a lack of cool-down capacity. That is a major reason for our large expansion this year,” Cheney said.

Hill Meat Co. does private labeling for about 20 companies. There is also a new emphasis on fresh sausage production that will not require a smoking step and allows for growth without taxing the plant’s smokehouse capacity.

The company has seen a decline in its foodservice business during the coronavirus pandemic. But the firm was proactive in re-training its employees to follow CDC recommendations and also implemented a number of its own procedures – frequent sanitizing of work areas, limiting the use of break rooms to fewer workers at a time and donning and doffing work wear and PPE.

“We also have to give kudos to our Quality Assurance team who were quick to implement the protective measures we decided to take so we could protect our employees and our product during this crisis,” Nicole said.

“Our BRC certification helped give us an advantage in being somewhat ahead of the recommendations for COVID-19. We have very stringent sanitation and quality programs in place already, which helped us implement the recommendations seamlessly. Our success is attributed to a fantastic team of management and staff and we can’t thank them enough.”