We use cookies to provide you with a better experience. By continuing to browse the site you are agreeing to our use of cookies in accordance with our Cookie Policy.
Home » Pancetta: How Italians do bacon

Pancetta: How Italians do bacon

To many people who are familiar with Italian cooking and meat products, they know bacon and pancetta are similar in some ways, but not the same thing.

“In fact, pancetta is sometimes called ‘Italian bacon’. But it is not what we usually think of in the United States as bacon,” said Herb Eckhouse, co-founder and co-owner with wife Kathy, of La Quercia, a cured pork processor based in Norwalk, Iowa.

Both meat products come from pig bellies, although what’s called bacon can come from the other parts of pigs as well, Eckhouse pointed out. “If you think about it, bacon also can come from the loin, from the shoulder and even the jowl, but 90% of bacon made in the United States comes from a pig’s belly.

“Some people say that bacon is any kind of pork that is cured and smoked, although maybe that’s going a little far. The main difference between bacon and pancetta is that bacon is usually cured and smoked. While pancetta is dry-cured and often aged, it is not smoked. Yet when you look at them, they have a similar appearance,” Eckhouse said. Both are considered “raw” and need to be cooked before eating. But they can be used interchangeably with other foods, depending if you want a smokey flavor or not.

Unlike bacon, pancetta is cured simply, and the focus is really put on how this curing is done. Salt, spices, and various aromatics are often added to the pancetta cure to infuse it with particular flavors. Some more for some pancettas, some less for others. Pancetta sometimes is also sold sliced paper-thin or cubed. Also, the thin slices of pancetta can be wrapped around vegetables or meat before cooking. If the pancetta is cubed, it can be used like bacon, sautéed with onions or garlic to form the base of a soup, pasta, or risotto. 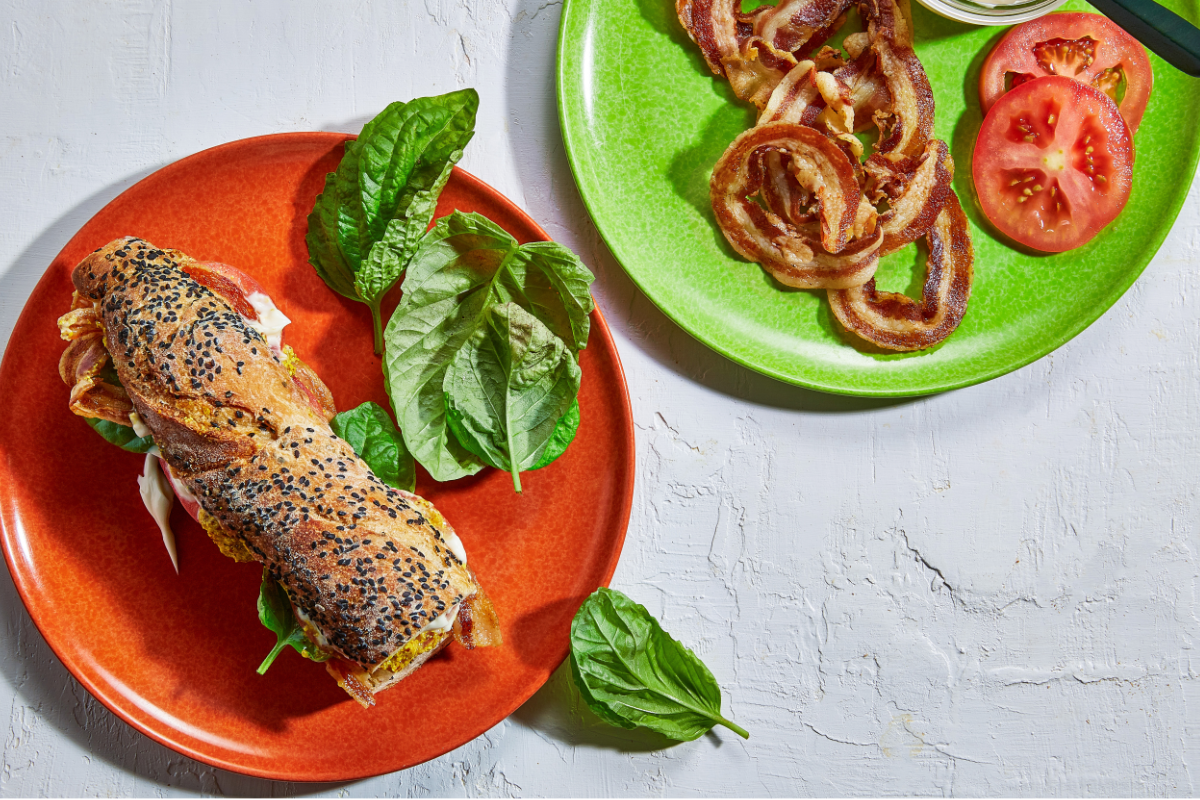 But pancetta and bacon are also different from each other in many ways as well, Eckhouse said, because they come from two quite different culinary traditions. “Bacon really has an English background, the tradition of salt pork, then when it came to the US, it became a very regional cuisine. No matter what part of the world people came from, they had pork bellies and that’s where bacon and pancetta came from,” he said. “Everyone had belly meat, a great source of fat and flavor. But there were different styles of bacon due to different cultural traditions.

“But pancetta and how it was made came from one cuisine and background – Italian. I think there are differences in the way the two are used.  In the US, bacon is a major feature used in dishes. You have bacon and eggs. Bacon added to sandwiches. The bacon is a major part of the meal. In Italian cooking, with pancetta, it is not so much a feature in the meal – it is really more an ingredient. So, in pasta, recipes will call for pancetta. In pasta, the pancetta is more of an enhancement than anything,” Eckhouse said.

At this time of the year, pancetta is a great enhancement for meats grilled outside.

Eckhouse tells a story of how pasta with pancetta (pork) came to be called Pasta Carbonara. “Carbone is ‘coal’ in Italian,” he said. “So, a man who was a coal miner was selling some of his coal in Rome. Right across the street from him, his wife owned and ran a café. In her restaurant, she featured pasta and pancetta (pork). Carbonara literally means ‘coal miner’s wife’ in Italian. So that is how her dish – Pasta Carbonara – got its name.”

Eckhouse also describes how a special breed of pig, Tamworth, is used to create bacon. The breed’s existence has been threatened in the United States today. It came to the United States from England in the mid-19th Century.

“The Tamworth has been called the ‘bacon pig’ because it ages and develops flavor. The meat also has a natural sweetness to it, so we don’t have to add any sugar to the cure. In contrast, when making pancetta, the meat is predominantly from Berkshires and Durocs, which supply a rich fatness to the pancetta,” he said.