Supply and demand at A Butchery Shoppe

When Kevin Olson wanted to start learning about the meat business, he first relied on his childhood experience working with his parents in their Spring Valley, Wis., on-the-farm slaughter operation and at a locker plant in town during the late 1980s. But as he started thinking about what would make his future in the trade more successful, he considered what others were doing and what his community needed.

His family bought a larger kill plant in Woodville (11 miles away) in 1989. The idea was to get a larger facility that could be converted to allow fabrication and a retail operation.

In April 2009, Olson and his brothers, Cory and Keith, bought the family business. The idea was to have a larger facility that could be turned into a slaughter, fabrication and retail operation.

Olson explained the tougher times that followed: “We went ahead with it and over the next five years my brothers left for other pursuits. I got a call from the Spring Valley borough to see if I was interested in a larger grocery store in that community. I took on some partners and went ahead with that purchase.”

The Spring Valley production facility, opened in October 2017, and the retail store started in December of that year under the name of A Butchery Shoppe.

It is a life-lesson for those who wouldn’t know a bologna sandwich from a golden opportunity. “It was a 6,000-square-foot grocery store that closed,” Olson said. “Our concept was to recognize what the town needed and give the folks a new take on an old-fashioned butcher shop. You’ve got to realize this was coming home for me, to a town of 1,300. Their grocery store had been closed and people had to drive at least 18 miles to get their basic food supplies. 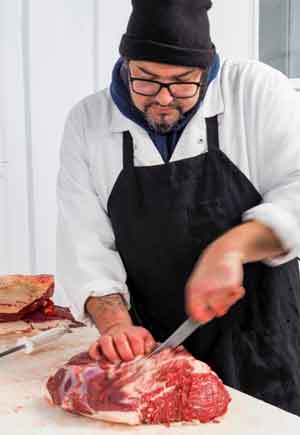 “Sure, I wanted them to be able to buy the best quality meats possible but felt an obligation to give them the fresh produce, vegetables and canned goods they needed daily. There is sure a lot of glass in this place now...jars of homemade sauerkraut, kimchi, salad dressings and those things you may not often find in even the largest grocery chain stores.”

Olson, 44, wears the title of production manager at A Butchery Shoppe (The “A” pays homage to his late mother Audrey, who worked with him in the old locker plant).

He brought along his wife, Fadra Greene, who had worked with him at the Woodville facility. She runs the office, retail store and handles shipping and ordering. She is also the new operation’s HACCP coordinator.

Together they retro-decorated the 1,800-square-foot retail area, using old slaughter plant rails, track lighting and lamps, raw lumber paneling, and some good advice from a designer partner to create an aesthetically pleasing and warm shopping experience.

“It’s truly word of mouth from customers that brings new people into our shop,” Olson added. “We offer prime and top-quality meats, sourced locally when we can, but at other times obtained from smaller packing houses. We donate to and promote our high school football team by donating hot dogs for them to sell at home games. We donate to our local ambulance service, baseball team, 4-H and FFA groups by buying their animals.” 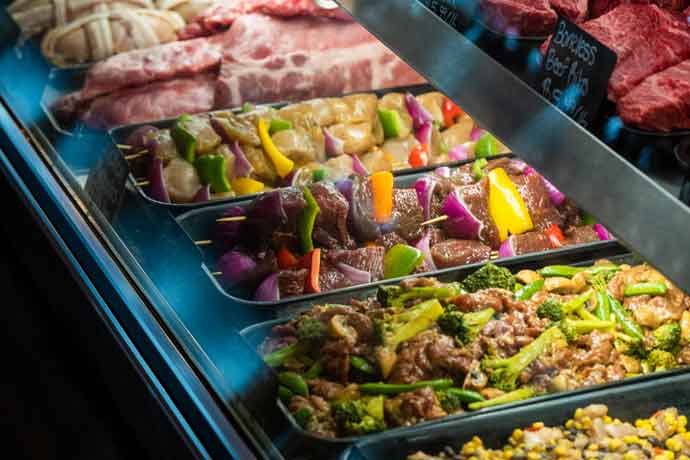 Displayed in the store are over 100 awards Olson has earned for his entries in state and national meat competitions, and an astounding 10 gold and three silver medals from the IFFA judging in Frankfurt, Germany, in 2013. The golds were earned for his dried beef, beef jerky, chicken andouille, lamb cervelat, bison summer sausage, bison snack sticks, beef snack sticks, ham and pineapple snack sticks and smoked boneless ham. Olson was also honored with the Ehrenpokal Trophy based on overall medal count.

Bacon is a best seller at the shop, where varieties such as uncured, sugar-free, pepper, three-pepper and a Southwest version are offered, along with cottage bacon and beef bacon. The business produces between 4,000 and 6,000 lbs of bacon weekly in its one-truck smokehouse, about 60% of which is sold to wholesale accounts like foodservice establishments.

Flavored brats are a popular draw, along with summer sausage – the manna meat in Wisconsin. A Butchery Shoppe also bakes its own artisan breads and bagels.

There is also a bountiful deli in the retail area where everything from Olson’s own prepared line of deli meats are available along with a good selection of cheeses, another staple in the Badger State. It’s not just the wide selection that attracts shoppers to the deli counter, it’s the flair for doing the little things right that sets it apart – little things like frenched pork hocks.

The store has 12 full-time employees (including Olson and Fadra) and 18 part-timers. It is complete with a full commercial kitchen. Olson says he offers cooked items that customers can pick up for their outdoor dining, but that they do not want to venture into full catering.

The retail store produces meat and cheese platters, gift boxes and baskets for pick up, and Olson said their Easter ham traffic was “out of this world.”

The company’s productivity is surprising considering it originates from a butcher shop that opened its doors less than three years ago and has already added a 2,000-square-foot expansion for freezer and cooling space.

“I just love what I do...it’s my passion,” Olson explained. “I want to be old-fashioned in quality of what we offer, including service. But it is important that we always look ahead and see what we can do to offer something different.

“We’ve begun to increase the number of cooked and fully prepared meat items we offer; things like marinated chicken breasts or seasoned and fully cooked rotisserie whole chickens. We are thinking about the meal kit concept but before going that route we must make sure every detail is thought through and that the customer will not be disappointed in any way.” 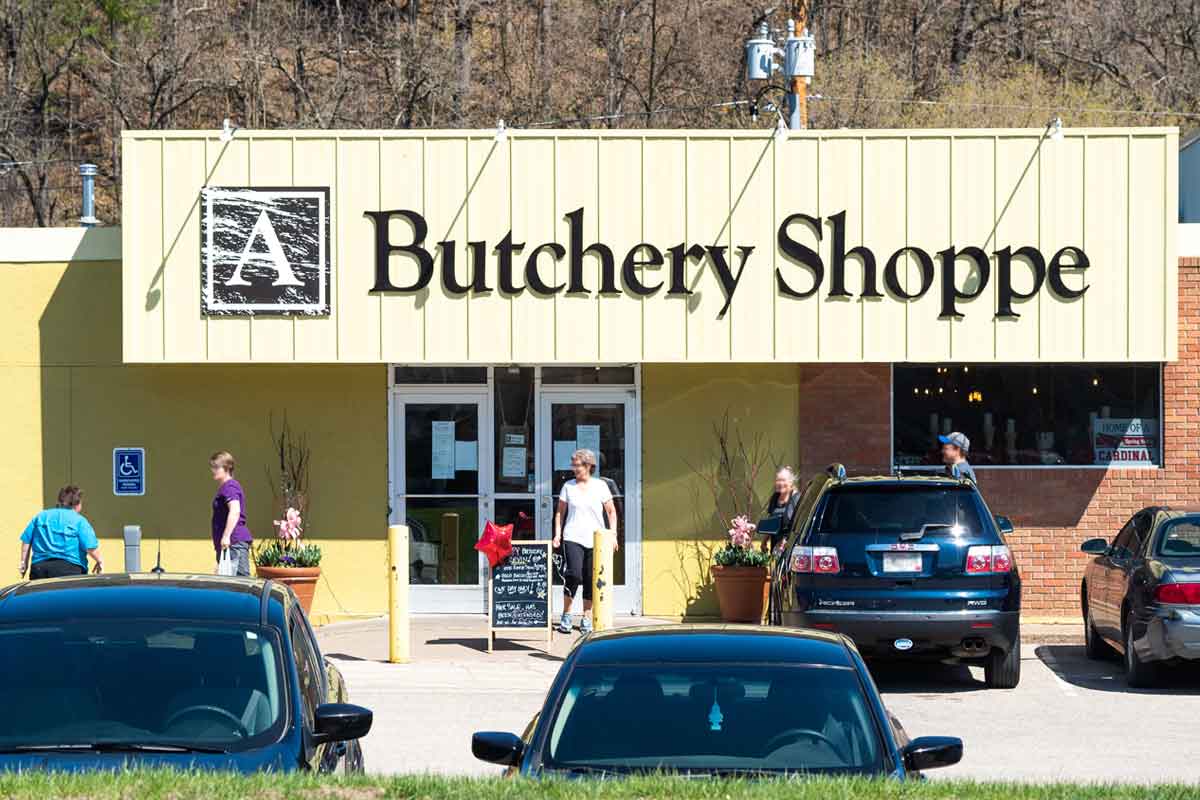 It is such consideration that has enabled the fledgling business to soar in its reputation. For example, with the outbreak of the coronavirus (COVID-19), A Butchery Shoppe was the first in the area to offer curbside pickup for orders (three days a week) to provide peace of mind for the elderly or at-risk customers. They also put out hand sanitizers and disinfectant wipes for their customers.

So impressed were their loyal base of customers that some offered to make face masks for the store’s employees. Such paybacks started coming in March of this year when an impressed customer wrote to the Pierce County Economic Development Corporation to nominate the company for the Small Business of the Year Award. And, they won it.

It indeed is a meat processing company that takes nothing for granted. The quality is in the details. Olson is a stickler for quality control and listening to customers and their wishes.

“I firmly believe that we want to have a clean label philosophy in our establishment,” he said. “That means that we avoid MSG, fillers or allergens in our foods.”

And, when challenged with the concept and design for the new facility, he went to an unlikely source...inspection officials.

“We went to many other area plants and saw what they were doing,” he said. “They opened their doors for us and were honest. Then we went to our inspection folks, including an enforcement officer, and asked for their opinions. They appreciated the fact that we were looking at the aspect of a safe food production environment. What we came up with was good product flow that considered and maximized the safety opportunities. Guess what? It really worked for us.”