We use cookies to provide you with a better experience. By continuing to browse the site you are agreeing to our use of cookies in accordance with our Cookie Policy.
Home » Targeting Listeria with a game approach

Targeting Listeria with a game approach

Part of being a successful steward of food safety in the meat and poultry industry includes the pursuit of continuous learning and keeping up with the latest research and technology available to prevent and detect pathogens in processing plants. Listeria monocytogenes is one of the most elusive and potentially devastating pathogens, posing a threat to a wide swath of product categories in the meat and poultry industry, especially in the production of ready-to-eat products.

Twice each year, food safety professionals from across North America come together to hear from the meat and poultry industry’s foremost experts on the detection and prevention of Listeria during a two-day, immersion-style conference. During the semi-annual North American Meat Institute’s Advanced Listeria monocytogenes Intervention and Control Workshop, representatives from all sizes of meat and poultry processing companies come together to listen, learn and network with their industry counterparts. At each event, attendees hear from other processing companies who are collectively focused on controlling the pathogen and addressing issues ranging from general sanitation practices to sanitary equipment design. The workshop offers solutions based on implementing corrective actions, sampling regimens and utilizing data analysis.

Just before lunchtime, workshop organizers introduce participants to an exercise they claim is one of the most popular and engaging parts of the event. Modeled after entertainment-based, immersive “escape room” experiences designed for adventurous consumers or team-building corporate outings, seek and destroy is a game that has become synonymous with the Listeria workshop and one of the most integral parts of the events. 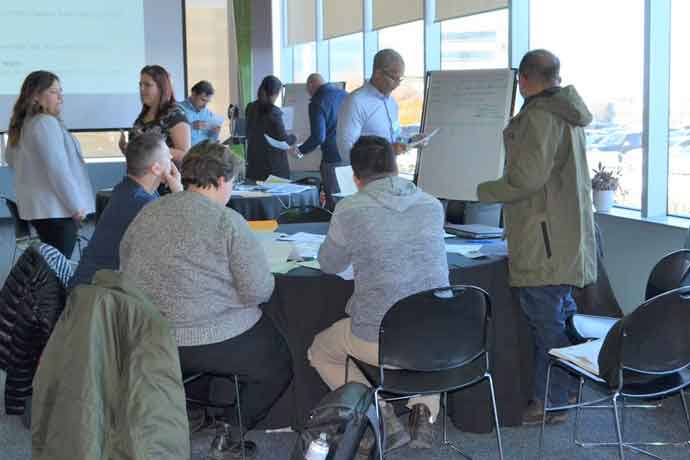 The game is organized and led by: Steve Tsuyuki, senior director of sanitary design and corporate sanitation with Maple Leaf Foods; Susan Usjak, corporate sanitation auditor with Maple Leaf Foods; and Matt Henderson, director of food safety with Land O’ Frost. The team is quick to give credit to one of the creators of the game, Melissa McCrory, a former employee at Maple Leaf who specialized in adult learning and was instrumental in developing the program. Tsuyuki says she identified how to ensure engagement during the learning process, which has been key to the success of the program. Their goal was to create a system that was suitable for how adults learn but complex enough that they could benefit from playing the game. The premise is to create multiple teams comprised of a mixture of attendees, each of whom is assigned a random job title with a fictitious processing company’s plant where a Listeria sampling positive break occurred.

Referencing Maple Leaf’s infamous Listeria recall in 2008, Tsuyuki remembers all too well the devastating impact of the outbreak, which sickened about 57 people and was linked to 23 deaths. The source of the contamination was ultimately traced to slicers that were used in a Maple Leaf plant that were routinely cleaned and sanitized each day to approved levels, yet still harbored the pathogen. Shedding light on Maple Leaf’s experience has opened the doors to other companies sharing details of their challenges when dealing with Listeria detection and control. He says discussing lessons learned from living through those experiences is an opportunity to raise the bar for the entire industry and implementing those lessons into the seek-and-destroy program has enriched its value to attendees.

“The concept of seek and destroy is interesting because it’s more complex than drafting a document or implementing an SOP or cobbling together a PowerPoint presentation to present to a team at a plant,” Tsuyuki says. “Those precursory efforts don’t account for the layers of complexity and how people need to engage to find a source or determine the modes of transfer.”

McCrory and Usjak conceived the concept as a way to train Maple Leaf employees initially and expanded it to become a part of the NAMI workshop.

“Melissa and I were tasked with trying to come up with a novel idea. We got the idea from an escape room; that was the original concept,” Usjak says, explaining that in those entertainment-based experiences, participants are actually locked in a room and are challenged to solve puzzles and interpret clues in order to free themselves from the room.

“We thought, ‘what if we could do this from a Listeria seek-and-destroy approach?’” she says, “and actually make it interactive where a group of people had to solve an issue that was going on in a plant in order to win. It kind of snowballed from there.”

She credits McCrory with developing the adult-learning component.

“While the game is very much about Listeria seek and destroy, there are puzzles, clues and things like that interspersed into it that are designed to give people a win; give them encouragement using a team approach with a group-mentality effort.”

Playing by the rules 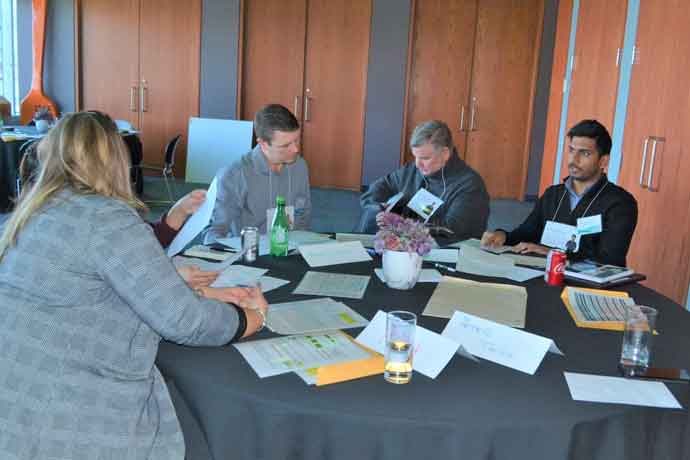 The object of the game is for each six-to-eight-member team to find where Listeria is harboring (the source) in the fictional plant and how it’s making it transfers to the positive swab site(s) on the processing line. Participants are given details about the plant and information about the positive finding that is being portrayed. As part of discovering where and how the contamination is occurring, teams have the opportunity to access clues by solving various puzzles using the Listeria control equation. Solving additional clues and puzzles allow them to unlock more information, such as pre-op and GMP records and results of virtual swabs from all around the plant.

“The whole idea is to get them to actually think about, ‘where do I think the positive is coming from and what information would I need to figure out if that is correct or incorrect?’” Usjak says. The creators of the game made every effort to make the scenarios as realistic as possible, including deception.

“We threw in way more information than they would ever need,” Usjak says. “We made it very messy,” with as much as 90 percent of the information designed to sway the teams, which reflects real-world situations. “You’ll get a million pieces of paperwork and there’s actually not much valuable information in there and you have to sift through it,” she says.

Apparently, the deception works, based on the success rates of participants over the years. Usjak says only about 60 percent of the participants solve the cases they are given in the 90 minutes allotted for the exercise.

“The goal was to create realistic scenarios that people will actually encounter when they’re doing a real seek and destroy process and force them to develop the skills they will need to filter the good information from the bad and to avoid pitfalls,” Usjak says. “In real-world situations, it is common to focus on past investigations or for a lot of people involved in the investigation to get an idea in their mind that ‘this must be the positive,’ so they make all the data fit their preconceived idea as opposed to letting their hypothesis change based on the information.” 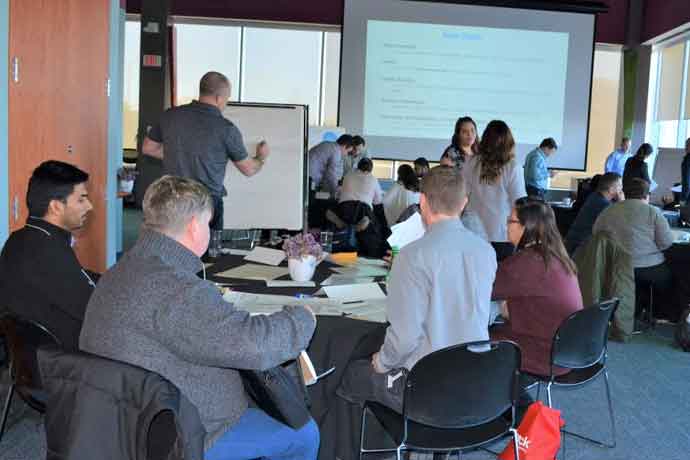 Tsuyuki says watching the interaction among the team members is interesting, with participation rates trending much higher than in many workshop group activities. “Within the first 15 to 30 minutes people start getting really engaged; you can sort of see people moving together, coming to the table and then sifting through the wealth of information, much of which is designed to trick them.”

Many past participants have told Tsuyuki that prior to participating in the game, they had no knowledge of what “seek and destroy” meant in the context of food safety, especially if they had never been through the urgency of an outbreak or a recall. “Ninety minutes later, they have a much better appreciation for what a plant has to go through.

“It’s amazing how you can get adults to play games and they really get into it,” he says.

“The feedback from the course has been nothing but outstanding,” Tsuyuki says, and it has become the most anticipated item on the Listeria Workshop agenda.

As a presenter of the workshop for many years, Matt Henderson, director of food safety with Land O’ Frost, vouches for the effectiveness of the seek-and-destroy portion of the event as a training tool the company now uses at its plants. A prominent processor of sliced deli meats, it has been through Listeria-related findings and is proactively working to control the pathogen every day.

“When Maple Leaf first brought this to the Listeria workshop, I certainly recognized the validity of what had been struck on,” he says. Land O’ Frost and representatives from other companies are now working with Usjak and Tsuyuki to develop their own game scenarios, based on their own experiences, so that future course attendees will have a “fresh” game experience. Companies have also agreed to share their game experiences with the other companies presenting at the course. Sharing game scenarios helps the participating companies to keep their own training programs “fresh.”

The popularity of the program at the workshops and the adoption of it by other companies is validation. “It was a real game changer for us in terms of how we bring a really important concept for controlling Listeria training alive.”

These workshops focus on the challenge of controlling Listeria monocytogenes in order to produce a safe, nutritious product. The Foundation for Meat & Poultry Research & Education has worked with experts across the industry to develop a learning experience tailored to meet those challenges. The workshop includes time at a nearby associate member equipment company to demonstrate lessons learned at the workshop. Discussion topics will continue to focus on sanitation, equipment design, corrective actions, sampling plans and data analysis.