All types of meat and poultry – value and premium brands – gain consumer appeal when sodium content skews on the lower side, according to a Harris Poll sponsored by Kemin, Des Moines, Iowa. While some research suggests that flagging a sodium reduction on package fronts may imply less flavor, other research indicates that some consumers are attracted to such content claims. With so many ingredient technologies available to cut back on added sodium, it is now possible to tweak formulations without compromising on quality. Consumers welcome the efforts.

“The study showed that consumers who read labels and ingredient statements often base their purchases off of content claims, such as calories, fat, sugar and sodium, rather than the actual words listed in the ingredient statement or if the product has an ‘all-natural’ or ‘free-from’ claim,” says Amanda Houser, strategic technology manager, Kemin. “The relevance here is that all brands have the opportunity to make reduced-sodium claims.”

To get sodium content down, processors should evaluate all the sources of sodium along with their functions. Many sodium-containing ingredients are necessary for the manufacture of delicious, visually appealing, safe and affordable meat and poultry products. 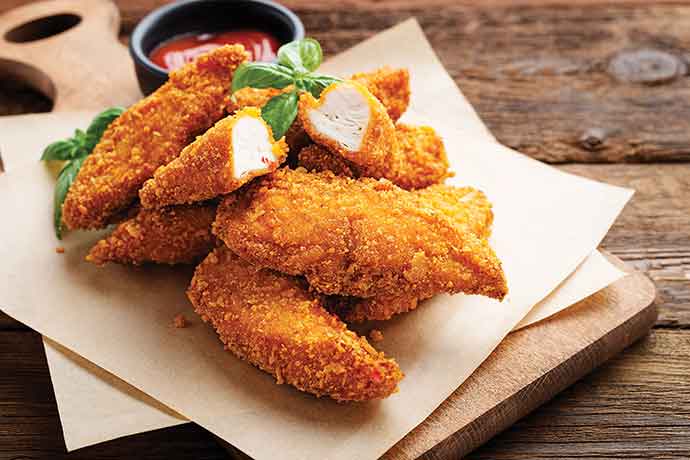 The primary source of sodium is sodium chloride, or simply salt, which is used in brines, marinades and seasonings. Salt is included directly in batters and breadings, with the latter often based on chemically leavened bread crumbs, where the chemical leavening agent may also be a source of sodium, e.g., sodium bicarbonate (baking soda).

“Adding salt to meat products helps improve flavor, increase yield and extend shelf life, so reducing sodium can prove to be a complicated feat in meat and poultry,” says Janice Johnson, food science lead for salt, Cargill, Minneapolis. “Through extensive research, we’ve discovered that one of the best sodium reduction solutions is potassium chloride. In meat applications, it effectively upholds flavor and functionality, while enabling significant reduction in sodium.”

While potassium chloride may reduce sodium by up to 50 percent in certain applications, there’s an additional benefit that is often overlooked. This sodium-reduction ingredient provides the consumer with potassium, an under-consumed nutrient that is known to counter the effect of sodium on blood pressure.

Potassium chloride may be used in meat products in the same manner as sodium chloride. It also exerts most of the same functionalities.

When used to replace more than half of the sodium chloride in meat products, bitter and metallic tastes may become detectable. Another drawback is its name. The belief is that the average American consumer finds the term “potassium chloride” to be too chemical sounding. Regulatory efforts are in place to remedy this issue.

“Its unique attributes offer clean and simple label opportunities by avoiding the need to use expensive flavor modulators or bitter blockers,” he says. “Our sodium reduction technology is effective in all meat and poultry applications, including seasoning blends, batters and breadings, brines, tumble-marinated or injected-whole muscle products, chopped and formed patties, hot dogs, and sausage links and patties.”

Steve Zimmerman, senior director technical sales, says, “We performed extensive academic studies of our potassium salt and validated its functionality is equal to sodium salt as it relates to protein extraction, water-holding capacity, cook yields, microbiological inhibition, shelf life, and more. The functionality is critical not only from a food safety perspective but also from an economic and product quality perspective. Simply removing salt in a meat or poultry application to achieve sodium reduction can increase costs due to reductions in yield and shelf life.”

Hoffman Estates-based Tate & Lyle offers a sodium-reduction technology that consists of tiny hollow microspheres of salt. It tastes just like salt, because it is salt.

“The hollow microsphere structure of the salt crystals maximizes the contact surface area relative to the weight, which results in a salty taste,” says Sue Butler, technical category manager, nutrition, bakery and confectionary. “The bulk density is also significantly lower than standard salt, allowing for a much better distribution of sodium throughout the food product. This makes it possible to deliver the same product attributes such as salty taste, texture and other functionalities with lower levels of sodium.” The hollow microspheres, which are labeled as salt or sea salt, work great in breadings and low-moisture meats, such as pepperoni or salami, according to Butler. Sodium reductions in the range of 25 percent to 50 percent are doable.

“Whenever possible, the hollow microspheres should be blended with other dry ingredients to achieve maximum distribution throughout the food item,” she says. “The ingredient should not be added directly to water or used in high moisture systems.”

In some lower sodium applications, it may be helpful to add flavoring systems that boost salty taste.

Sensient also offers sodium reduction systems labeled as “natural flavor.” Both are used in meat applications the same way as salt, and allow for up to a 40 percent reduction in sodium.

“There are no drawbacks to using these solutions as they don’t produce any of the bitterness or chemical notes that can sometimes be a byproduct of the sodium reduction process,” Lane says.

Common food safety ingredients based on acetates and lactates typically come as sodium salts. Water-binding ingredients, specifically phosphates, can be significant sources of sodium, too. Other water binders and extenders, such as proteins and fibers, inherently contain some sodium and should also be considered in any sodium-reduction effort

“We leverage our broad phosphate portfolio to provide customized blends for reducing sodium content in processed meat formulation that can be used in brine, dry rub and marinade systems, as well as batter and breading systems,” says Songwei Wu, scientist, Innophos, Cranbury, New Jersey. “This includes using potassium phosphate to replace all or part of sodium phosphate in these systems.”

In order to create these blends, it is paramount to have a large tool box of phosphates to work with in order to optimize function in the application. This includes moisture retention, muscle binding and water-fat-protein stability, so that the meat has a desirable texture, appearance and taste.

“We designed a specialty phosphate blend to enhance binding, moisture retention and to increase cook yield in formulations with a lowered usage level of sodium chloride,” Wu says. “The rationale behind this tool relies on high pH and increased ionic strength, which are the two important processing factors affecting muscle functionality.” There’s another system designed to replace sodium tripolyphosphate. It’s a balanced mixture of potassium and sodium phosphate that is optimized for desired functionality and process efficiency, while achieving sodium reduction at the same time, according to Wu.

“In batter and breading systems, phosphates are used as leavening agents to provide aeration and expansion during mixing and frying,” she says. “Typical leavening agents are based on sodium. We developed a sodium-free product that is calcium phosphate based and provides similar gas-release characteristics in reaction.”

“These liquid, propionic acid-based products are effective alternatives to lactates and diacetates,” Houser says. “They are used at 10-times less the application rate and can reduce sodium content dramatically. They are cost effective, efficacious solutions for value brands or products not needing to meet a natural claim.”

If a clean-label claim is important, the company offers a potassium-based vinegar antimicrobial.

“Use of no-sodium buffered vinegar allows product developers the flexibility to utilize sodium chloride or other sodium-based functional ingredients to deliver the desired texture, flavor and yield without exceeding their sodium thresholds or sacrificing shelf life,” Houser says.

Corbion, Lenexa, Kansas, offers a range of standard solutions based on liquid potassium lactate/diacetate blends, as well as liquid vinegars and organic vinegars.

“We also have powdered vinegar, which is somewhat unusual; powdered vinegars are typically higher in sodium, but we now offer low-sodium and trace-sodium options that are highly soluble and free-flowing,” says Tom Rourke, senior director, business development. “All of our reduced-sodium solutions can be mixed into a brine or marinade, or they can be injected directly into the meat.”

Whether a liquid or powder solution makes more sense for a specific customer depends on the application and the process that customer has in place. Generally, powdered options offer greater ease and convenience in handling and storage, and are less expensive to ship, according to Rourke.

WTI Inc., Jefferson, Georgia, offers vinegar and lemon juice concentrate-based products that are partially neutralized to pH of 5.5 or higher, which allows for use in a range of food matrices. The company optimizes the ratios of sodium and potassium levels to achieve functionality, stability and sodium reduction targets. Depending on the application and the ingredient blend, as much as a 95 percent reduction in sodium is possible.

“Our reduced-sodium products are naturally derived antimicrobials that inhibit the growth of pathogens and spoilage organisms, including yeast and mold, and improve the shelf-life of fresh and fully cooked products,” says Jasdeep Saini, vice president, research and technology. “These products stabilize color, work with multiple delivery systems, can be blended into flavor systems and coatings, are water soluble, and highly effective at low usage rates.”