We use cookies to provide you with a better experience. By continuing to browse the site you are agreeing to our use of cookies in accordance with our Cookie Policy.
Home » Sen. Booker proposes crackdown on CAFOs

WASHINGTON – Sen. Cory Booker (D-N.J.) introduced legislation he says will “level the playing field for all farmers and ranchers” and crack down on large meatpackers.

The proposed Farm System Reform Act of 2019 would: 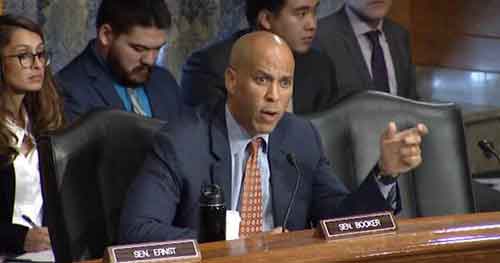 The Farm System Reform Act also would strengthen the Packers and Stockyards Act by prohibiting the use of tournament or ranking systems for paying contract growers; protect livestock and poultry growers from retaliation and “create market transparency and protect farmers and ranchers from predatory purchasing practices.”

“Our independent family farmers and ranchers are continuing to be squeezed by large, multinational corporations that, because of their buying power and size, run roughshod over the marketplace,” Booker said. “We need to fix the broken system — that means protecting family farmers and ranchers and holding corporate integrators responsible for the harm they are causing. Large factory farms are harmful to rural communities, public health, and the environment and we must immediately begin to transition to a more sustainable and humane system.”

Booker, who is a vegan, has proposed significant changes to the US food system. Most recently, he and Sen. Jon Tester (D-Mont.) introduced legislation that would place an indefinite moratorium on acquisitions in the food and agriculture sector. In 2017, he joined Sen. Mike Lee (R-Utah) on the Opportunities for Fairness in Farming Act which aimed to bring transparency to federal commodity marketing programs such as the beef checkoff. Booker also has proposed legislation that would support stewardship practices on US farmland and provide farmers and ranchers with grants to implement conservation practices.