We use cookies to provide you with a better experience. By continuing to browse the site you are agreeing to our use of cookies in accordance with our Cookie Policy.
Home » Advances in carcass treatments enhance food safety

New trends and research for antimicrobial carcass treatments, as well as advances in cleaning carcasses are resulting in greater food safety for consumers, say experts in the meat and poultry industry.

Elis Owens, director of technical services for Birko Corp., based in Henderson, Colorado, says that the current trend in antimicrobial carcass treatments is a focus on reducing water and chemical consumption. “Because of the importance of food safety, it’s essential to use antimicrobials on carcasses early in the harvest process to control pathogens. The pathogens of concern on carcasses are E. coli O157:H7, non O157 STEC E. coli, Salmonella and Campylobacter,” he says. “Listeria monocytogenes is primarily a concern in cooked and ready-to-eat products.”

Right now, he says the major trend is optimization of the antimicrobial process, without negatively impacting food safety in any way.

“An electrostatic charge is applied to the chemical solution. This results in the solution spray being attracted to the meat surface. So, the electrostatic application results in improved coverage of product surfaces while reducing the total amount of solution used. This means large meat and poultry processors can use less chemical and water. So, we have a major cost saving,” he points out.

This is a major focus for Birko and similar companies that provide help to processors, especially large companies, in the meat and poultry industry. “Most of the advances we’re involved in and working on today are related to optimizing the application process. Instead of using wash cabinets that run constantly for example, we can apply control to use them in a more precise manner, delivering water or antimicrobial where it is needed and eliminating overspray.

“Our focus begins after slaughter in a hide-on carcass washing cabinet where an attempt is made to remove as much soil as possible before hide removal. After the hide has been removed, it’s important to treat the exposed surface before bacterial attachment occurs. Once that’s done, you can proceed to evisceration and the final washing and intervention steps before chilling,” Owens says.

He says there are several chemistries that have an important role in antimicrobial treatment. Lactic acid – the original carcass antimicrobial – “it’s very user-friendly,” he says. “The next generation is our XIDE family of products – Beefxide, Porkxide, Chicxide, Lambxide, which are blends of lactic and citric acid,” Owens explains. “Another popular and cost-effective choice includes our BIRKOSIDE peroxyacetic acid (PAA) products.” 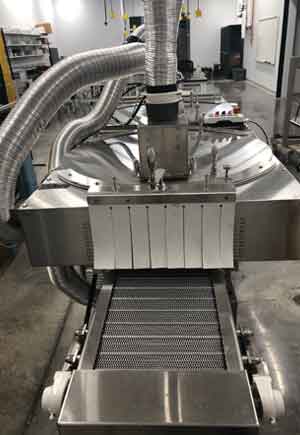 There are 180˚ recycled hot water cabinets and head and tongue washing units. The pathogens being looked for on carcasses include E. coli O157:H7, STEC and a lesser amount of Salmonella on beef, Campylobacter and Salmonella on poultry. Pork processors are beginning to use more interventions after slaughter takes place.

Owens explains how the acids work. “They lower the pH of the carcass surface. Exposing the carcass to the acidic environment kills bacteria.” The peroxyacetic acid, or PAA interventions kill by rapid oxidation of the cell.

Dr. Jonathan A. Campbell, a meat extension specialist and associate professor of animal science at Pennsylvania State Univ. in University Park, Pennsylvania, says the main trends in antimicrobial use and in cleaning carcasses, especially from the receiving stage to the evisceration stage at meat and poultry processing plants, are new, different and more effective interventions that are being put into action.

“In antimicrobials, we’re using combinations of acids – hydrogen peroxide, lactic acid, acetic acid, peracetic or peroxyacetic acid. This organic acid is used commonly in the poultry industry, to get rid of Salmonella and Campylobacter.” He explains that the acid treatment disrupts the cellular activity of pathogens that might be on the surface of carcasses. The combinations of acids work differently on different types of bacteria and increase the interventions against the pathogens.

Cleaning beef and other types of carcasses, from the “receiving” point to the “evisceration” stage, in meat and poultry plants, presents several types of challenges, Campbell says.

“At receiving, some plants will use liquid washes on live animals,” he says. “But there are limits to how much this can be done because of humane concerns about the welfare of the animals – how the animals are treated.”

“There are also seasonal problems because the times when animals can be cleaned easily doesn’t correspond to when pathogens like E. coli and Salmonella are at their height,” Campbell points out. “E. coli and Salmonella are more present in the summer, they shed more when there is a lot of dust in the air, and it is harder to clean the animals. In the colder seasons, when it’s wet, the pathogens aren’t present as much. You’re talking about opposite times of the year.” 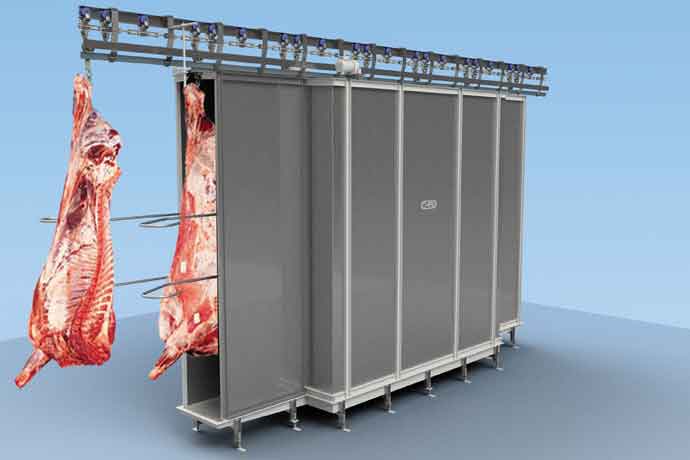 But when processing plants get to the point of doing sanitary dressing procedures, some of the best technology that can be used is very simple.

“It’s really what you’d call a prerequisite program,” Campbell explains. “And it’s easy. Things like sanitizing knives. Training employees very well in how to accomplish sanitary dressing of the animals.”

“In the case of cattle, not letting the hide fall back on the carcass. Putting tools into boiling water. If there’s fecal material on hands and gloves, washing your hands very well. You have to be very careful – if one of 10 animals is shedding E. coli O157:H7, the pathogen could easily spread to every carcass.”

Campbell also talks positively about bacteriophage, which means “bacteria eater.” Bacteriophages are viruses that are harmless to humans but can get inside food-infecting pathogens and bacteria and destroy them.

“Most processors involved in research are large, with laboratories and food safety staff people. But the truth is, it’s hard to do this kind of research at the plant level,” Campbell says. “You don’t want to bring pathogens into plants. And the plants certainly don’t want pathogens there. Instead, we use ‘surrogate organisms’ for research that are not pathogens at all. And smaller plants don’t have the money to do research, so they rely on us at the universities to do it for them.”

Campbell has been working with a colleague at Penn State, Edward W. Mills, Ph.D., associate professor of meat science and a meat extension specialist at the university, on another new technology that can play a role in destroying pathogens. It is called a Pulsed UV Light Conveyor System, and uses ultraviolet light to inactivate bacteria, viruses and pathogens, including food pathogens on animals.

“We’re looking at its applications and effectiveness on poultry,” Mills says. The system they have been working on is set up to be used on chicken parts or meat cuts, but the concept has been applied to chicken carcasses as well. They’re hoping it will have a great effect on destroying micro-organisms. It seems to have this ability on pathogens and coliforms, including E. coli O157:H7, E. coli STEC, Salmonella and Campylobacter.

“We have a conveyor unit – the chicken parts move along the conveyor line in the poultry plant and are hit by the ultraviolet light,” Mills explains.

Mills also boosts the idea of cleaning cattle hides by removing hair and extraneous matter before hide removal – chemical carcass dehairing for beef. He has research on this from the US Dept. of Agriculture in Clay Center, Nebraska. The idea behind this is improved microbiological quality in commercial beef processing plants.

The researchers examined the effect of chemical dehairing of cattle hides on the prevalence of E. coli O157:H7 and aerobic bacteria on carcasses. The results – chemical dehairing of cattle hides is an effective intervention to reduce the incidence of hide-to-carcass contamination with pathogens. The data also imply that any effective hide intervention process incorporated in beef processing procedures would significantly reduce carcass contamination by the pathogen.

Mills points out many larger processors use a steam pasteurization system as a means of cleaning carcasses. Hot water pasteurization is another choice, he says, while medium to smaller processors will often choose acid antimicrobials, an intervention focused on the surface of the beef, pork, lamb, chicken or turkey carcass. Right now, USDA is implementing pathogen performance standards for pork, Mills says. As this is being carried out, he thinks there will be efforts made to further develop antimicrobials that are geared specifically to pork.