We use cookies to provide you with a better experience. By continuing to browse the site you are agreeing to our use of cookies in accordance with our Cookie Policy.
Skip To Content
Home » DoorDash: Delivery orders are more personalized than ever

DoorDash: Delivery orders are more personalized than ever

SAN FRANCISCO — Americans are getting more adventurous and creative with their delivery orders, according to a new report from DoorDash. The company analyzed orders from January through November and surveyed more than 1,200 customers to track the years’ most popular food items and forecast upcoming trends.

Consumers are using delivery to experiment with diverse flavors. More than 95 percent of customers said they use food to explore other cultures, and 30 percent said they typically eat 5 to 10 different cuisines per month. Mexican food was the most popular cuisine ordered in 2019, increasing by 314 percent.

Half of the top 10 most popular items ordered throughout the year are part of Mexican cuisine. Burrito bowls took the No. 1 spot, followed by chicken tacos. Bean burritos, taco salad and nachos were also among the top 10 delivery order items.

American food was the second most popular cuisine, followed by Chinese, Italian, Thai and Indian. DoorDash predicted Thai food will be the “next big thing” in delivery in 2020. Customers who were introduced to Thai food for the first time this year ranked it as the top new cuisine they discovered. 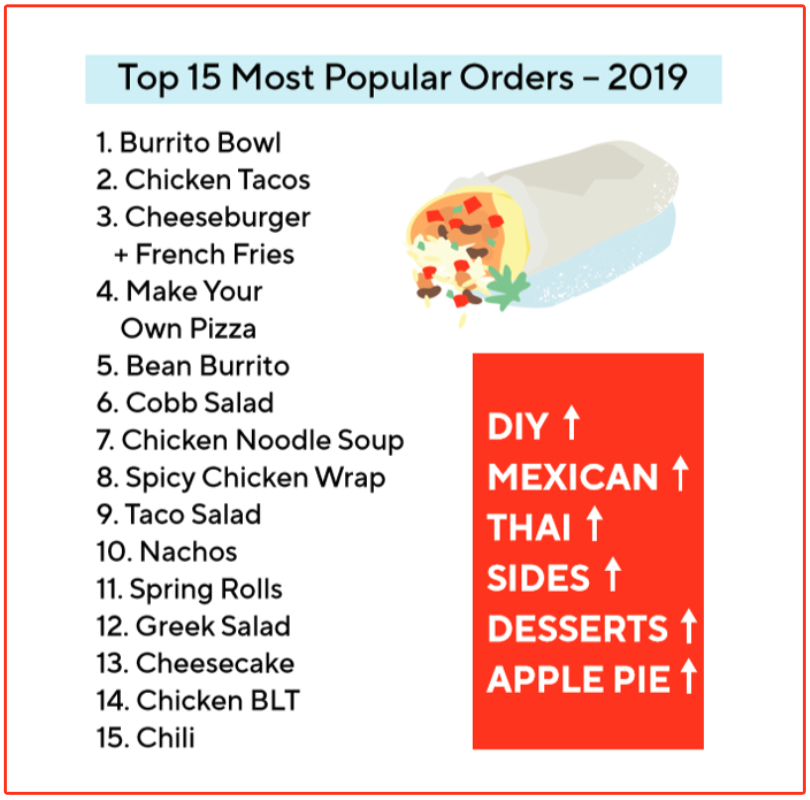 More restaurants are elevating the delivery experience by adding personalized elements to delivery menus. These “create your own” dishes were a top seller in 2019, according to the report. Ninety-six percent of DoorDash customers ordered customizable, DIY-inspired dishes. “Make your own pizza” was the year’s fourth most popular item, and orders of “create your own sushi roll” grew 902 percent.

The report also reinforced the growing importance of off-premises business for food service operators. Food delivery was the No. 1 most popular method of eating dinner, and 66 percent of Americans said they prefer delivery over cooking a meal or picking up takeout.

The rise in off premises doesn’t mean eating is becoming less social, though. The majority of people still eat most meals with others. More than half said they order delivery with at least two other people weekly.