Mandan, North Dakota, sits just west of Bismarck, across the Missouri River and is home to Cloverdale Foods. The 127,000-sq.-ft. facility processes a variety of products with a capacity of 1 million lbs. per week with the right mix. Products range from summer sausage and hot dogs to sliced ham and ribs, but the most important product to date for the 100-plus-year-old company, is bacon.

Cloverdale and its executive staff, like everyone else in the country, notice the popularity and innovations associated with bacon continuing to grow. However, for Cloverdale, bacon means more than increasing the bottom line. Cloverdale wants to do something great; it wants to be the best at something. Those in charge at Cloverdale believe the opportunity for that greatness exists within their plant. It will require a change, a pivot in the business plan and operations. Fortunately, it’s something the company knows how to do.

What is now Cloverdale Foods started in 1915 as Mandan Creamery. According to President and CEO Scott Russell, and photographic evidence, as the business grew and evolved through the 1920s and into the 1940s, it produced and sold butter, operated an egg hatchery, processed turkeys, added locations, and added milk and ice cream.

Through the 1950s and 1960s, the company began eliminating locations and partnerships.

“They started to close area operations,” Russell says. “The last one closed up in the late 1960s.”

“It’s been updated inside, boxed, reconfigured, changed,” Russell says. “Not so much on the plant side, but in the warehouse we’ve been able to figure out how to cube it out better, deeper racking, etc.”

Other businesses were owned and operated during the 80s and 90s outside of the current Mandan campus, as well. A snack stick facility operated in Marshall, Minnesota, as well as a pork processing facility in Minot, North Dakota. The plant in Minot killed approximately 600 head per day and supplied Cloverdale with lean, good quality, fresh pork.

“We shut that down because it was a coin flip on whether you made or lost money every year,” says Sam Towner, the company’s vice president of operations.

Through the transition from dairy into meat packing and processing, and all the openings and closings of adjacent business ventures over time, Cloverdale Foods learned a valuable business skill: the ability to change direction and move toward opportunity at the right time. Cloverdale’s current work examines what a pivot to more bacon might look like in terms of processing, operations, sales and current customers that love and expect a product mix beyond bacon. 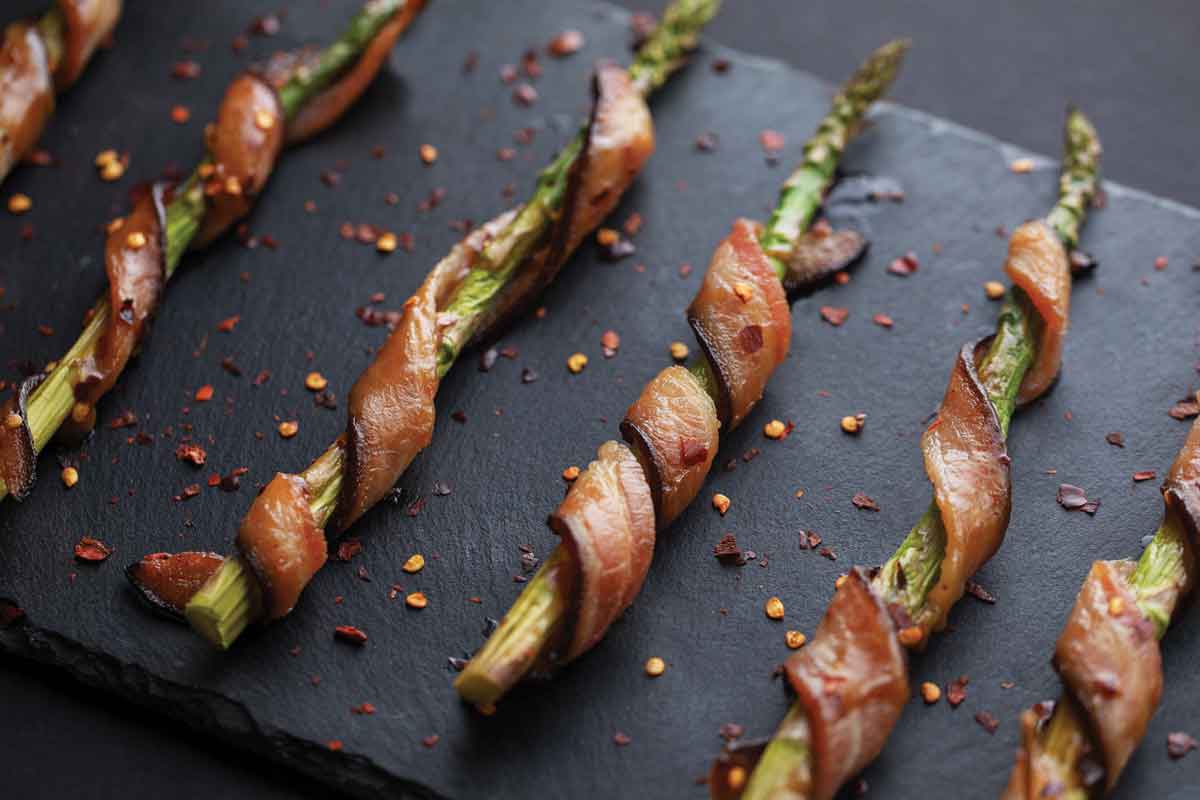 Cloverdale’s product mix varies widely and gives the company a breadth of items to offer, but some of the facility’s specialized equipment processing its niche items sits idle for much of the year. Cloverdale produces low-sodium hot dogs for a large box store and K-12 foodservice, as well as a specific sheep casing hot dog for the Minnesota state fair, among others. While this is good business for Cloverdale, due to the size of the batches needed to fulfill orders, it’s not an efficient use of space to house the production equipment.

During a quick daily check-in meeting in July, Cloverdale executives describe the plans they have for the day and the different scenarios in which ratios of bacon versus other products ebb and flow.

“I’m trying to unpack this awesome diagram behind me to a Power Point,” says Miranda Bergquist, chief financial officer at Cloverdale.

The timeline represents a rolling 12 to 18 months and is dotted with major milestones and decision points regarding the possible shift to a significant increase in bacon production.

The timeline will most likely change “...every 30 days for a while, just until we kind of figure out what we’re going to do with the expansions, strategy and the next move,” she says. “I think this allows us to keep our eyes on all the moving parts and get our priorities rearranged when necessary as new things come into play. So, I’ll be working to put the first one [timeline] in so that we can review it in our strategic [executive strategy meeting] next week.”

The idea to focus on bacon production started with significant growth in the category. The company reconfigured a hallway to provide more bacon production and sees upside in continuing to pursue the idea of bacon focused production. They talked about adding a new plant on the back of the Mandan plant for bacon-only production, but the economics didn’t make sense. Bergquist’s timeline represents the point they’re at now.

The decision on how to proceed in terms of focus on bacon will not come easy, and there’s no right answer, Russell says. Cloverdale has customers interested in non-bacon products and expects them. Cloverdale produces non-bacon products that do well for the company and are consistent, but those products do not possess a universal appeal across the country.

“That’s really what the team is tasked with right now for probably the next 90 to 180 days,” Russell says. “We have a couple other scenarios to look at as well.” 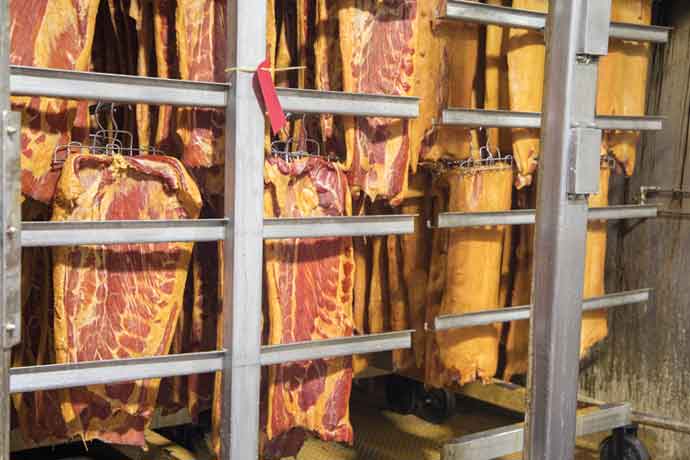 More bacon factors into the equation of raising capacity.

Vice President of Sales Joe Savageau and new brokerage partners want to tackle opportunities east of the Mississippi as well as pursue larger national accounts. Cloverdale is heavier on the foodservice side, mostly selling to regional chains, but national chains and more retail are current targets.

On the retail side, the current executive team made its first acquisition, the Houston-based Blue Ribbon brand.

“It’s just a brand no manufacturing facility,” Russell says. “Everything had been co-packed for it and it was part of the Tall Tree Foods Group, which is based out of Palo Alto [California]. It was a good exercise for this team going through an acquisition.”

Towner says the acquisition equates to retail growth, but some private labeling would further ensure space on the shelf with future retail partners.

“That’s the future of some of this, investing in the relationships that already exist with retailers in Houston,” Towner says. “We want to be their partner, but in order to get our Blue Ribbon brand on their shelf, we’re doing a couple of their brands, as well.”

Future targets and deals in progress aren’t the only thing pushing Cloverdale’s decisions on how to move forward with even more bacon production.

“Sales is challenging operations,” Towner says. “That’s good. It’s going: We’ll do this much, then fill that up, then we’ll do more and fill that up, and it’s primarily bacon. We’ve got really good traction and we went to Salesforce.com on the sales side, so we have a really good understanding of our pipeline.”

Leigh Milander, vice president of marketing, looks to data to further the company’s understanding of where, why and how to focus and broaden its concentration on various bacon markets. Utilizing multiple data sources, Milander says the data regarding foodservice relates to retail, and the trends in the two segments drive each other.

“It’s always helpful to get a big-picture view and to see how they inform one another,” Milander says.

Milander works with Chicago-based market research firm IRI to get different views of what goes on in the retail grocery markets, while spearheading a proprietary research project with Vista Market Intelligence, Lake Oswego, Oregon. A brand tracking study with Hanover is kicking off soon and a foodservice insights partner search is currently underway. Cloverdale will use the insights from all its dealings with bacon-market-data from its many resources and concentrate them into key points for Savageau and the salesforce to apply their efforts. 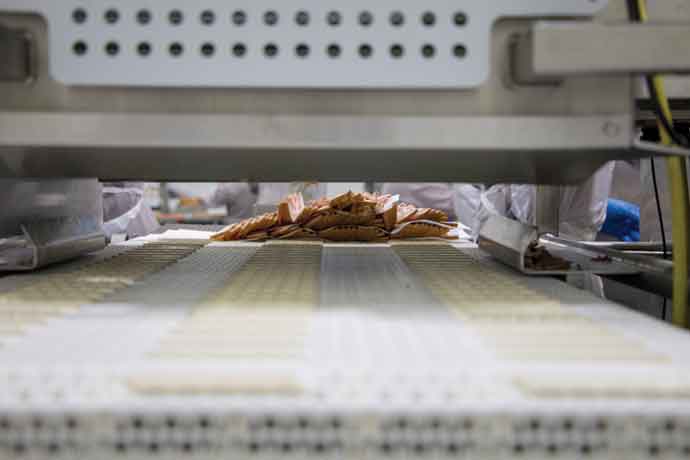 Merely raising the discussion of possibly divesting some of the products Cloverdale has become known for over the years to push more resources toward higher bacon production brought strange looks early in the process. Russell mentions the early years when product variety was abundant, but how that variety was possibly a crutch.

Early in his career as a salesman for the company, Russell saw the broad offerings as a way to get a sale. If a customer didn’t like a product, he could reach into his bag and pull out a different one until he found something the customer liked. Now he looks at the business from a different perspective. He’s more interested in a healthy organization overall. Russell says after 22 years he has more operations savvy and has “…the team in place that’s open minded enough to take this on.”

Putting together the right team to achieve greatness in an area means everyone understands and agrees to the discipline, acceptance of certain necessary compromises and a dedication to exact execution. The team at Cloverdale also accepts bacon as the focus of that dedication.

“It begins to be almost an overwhelming math problem to try and think how we can do that across multiple products,” Russell says. “So again, we are really fortunate that we have such a good group of people in place to help think it through.”

Because of Cloverdale’s multi-generational family roots, its legacy business and products had considerable support both inside and outside of the company. Customers and employees expect certain products whether efficient in production and process or not. When Russell first began to talk about possibly eliminating certain items from the mix, his ideas were not always met with smiles.

“There’s this nostalgia around that legacy business and it’s difficult to even raise the discussion of divesting it,” Russell says. “I remember a decade ago when I started to say things like, ‘I’m not sure we should do this anymore,’ and I just felt the room look awkwardly at me. It was really uncomfortable and personally I probably grew a bit of a shell around me for a while and thought, ‘oh boy, I guess we’re not going to do that and we’re going to continue to go this way.’”

As time went on with Russell in the role of president and CEO, he began to see more how Cloverdale could change its bacon processing, as well as success in the category and the category’s continued growth.

“It’s growing and there’s still an opportunity,” he says. “If you can find certain points of differentiation, it’s not a category that’s entirely commoditized.”

By moving more time and resources toward bacon production, Russell and his team could create something special, but it means some of the legacy business will have to change. The team feels they can scale the bacon, “…put good intentions around it,” and make it a national seller.

Cloverdale has utilized its vendors to introduce the company to a large group of specialized consultants to guide it through the process of crafting high-end bacon. Cloverdale takes the suggestions and implements them to work on creating true craft bacon products.

“We’ve spent a significant amount of time in that category, in that area, but it’s all been with intent,” Russell says.

For Russell, his executive team and everyone with an interest in Cloverdale, the future appears to include more bacon. Regardless of how much it finally increases bacon production, currently the company is well equipped with three Thurne bacon lines and a Cashin bacon line. The processor will be deliberate and informed with its decisions.