We use cookies to provide you with a better experience. By continuing to browse the site you are agreeing to our use of cookies in accordance with our Cookie Policy.
Home » Successes, challenges with China and Japan

Successes, challenges with China and Japan

KANSAS CITY, Mo. — Ongoing frustrations amid incremental progress in trade talks with China, a recent trade deal with Japan, and potential trade relations with Europe, the United Kingdom and other markets that could benefit the agricultural community were discussed during the 2019 Feed and Pet Food Joint Conference Sept. 31 to Oct. 2.

Peter Tabor, vice president of regulatory and international affairs for Pet Food Institute, sat down with Chief Agricultural Negotiator Gregg Doud with the Office of the United States Trade Representative (USTR) during the conference to provide a trade outlook to pet food and feed manufacturers in attendance.

No deal in China

“US agricultural exports last year were $145 billion, slightly up from 2017. The reason we start with that context is that Chinese imports of agricultural commodities from the world last year were $124 billion,” Doud said. In a good year, the US will export $20 billion of agricultural commodities to China, which represents only a sliver of both China’s import market and of the United States’ agricultural capacity to export to China, according to Doud. “$20 [billion] out of $124 billion just isn’t going to cut it, given the capacity of US agriculture to export to [China],” Doud said.

“Since last summer, I have been across the table either face-to-face or by video conference with my Chinese counterpart, the vice minister of agriculture of China, 21 times,” Doud said. “In the United States, the US farmer, from the minute he wakes up in the morning to the minute he goes to bed at night, he’s thinking about one thing: How in the world are we going to feed over 9 billion people on this planet by 2050?” Doud said.

Technology is the answer, Doud added, saying “We’re going to use all the technology that we have at our disposal, we’re going to use it as safely and as efficiently as possible, and we are never going to apologize for it… and I think this is the message that all of us in agriculture in the United States need to tell the rest of the world.”

Doud said he and China’s vice minister of agriculture have “spent hours talking about biotechnology,” which seems to be a primary barrier, along with vastly different regulatory standards, between the countries inhibiting more free trade of agricultural commodities, such as animal food. 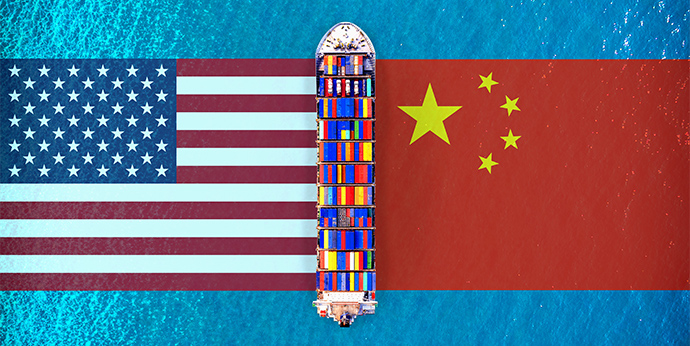 “Let me be clear: they understand the quality of US product. They absolutely understand that we have the safest in the world, they admire our regulatory system,” but China has not yet been able to achieve this level of quality and regulatory pervasiveness due to cultural and political obstacles, Doud said.

“There are still many things that we’ve got to talk through and sort out. I don’t know whether we’re going to get a deal or not, but in terms to my commitment to this, you can rest assured we will not stop in agriculture until we do the very very possibly best that we can… they just have to follow the rules,” Doud said.

These talks take time, Doud reiterated. “This is an extraordinary conversation between the two biggest economies in the world,” he said. “…You only have one shot. You’ve got to get it right. So, if it takes a few more weeks, to dot the I’s and cross the T’s, we have to do it. We have to take the time.”

Tabor also asked Doud about his perspective on African Swine Fever (ASF), a rampant disease amongst hogs that is highly contagious, highly destructive and currently has no cure. The epidemic has impacted swine — and consequentially, the pork markets — across Asia, including China, Vietnam, South Korea and the Philippines, and threatens nearby countries such as Thailand.

The pork market in China, however, has been hit the hardest.

Doud added that the real number of swine affected by ASF is likely closer to half of its total hog population. He described the disease as a “lava flow… moving very slowly and [destroying] every single thing in its path.”

The danger of ASF spreading to the US is a question of feed imports from that part of the world, Doud said, and of the levels of biosecurity the US is implementing to keep the disease out. The US could help meet the demand of pork in affected countries as long as it continues to keep ASF out.

Juxtaposed against the doom and gloom portrayed in the first half of the conversation, Tabor and Doud moved on to trade relations with Japan, which Doud described as “sunshine on a nice spring-time day.”

"We are looking high and low, looking to fix all kinds of problems that we can and diversify the portfolio," Doud said.

The USTR has reached a trade deal in agriculture, among other commodities, with Japan that it expects to roll out on Jan. 1, 2020. Japan has historically been a huge export market for the US in grain, beef, pet food, feed and feed ingredients, Tabor pointed out.

Doud said a few commodities that did not make it into this deal with Japan were rice, butter and evaporated milk, but that “we got 80 percent of dairy on the bus.”

A main barrier of trade between the UK, other European countries such as France and the US is the use of technology in agriculture.

“The Europeans have jumped the shark when it comes to use of technology in agriculture. They’ve lost the plot,” Doud said. He went on to explain that the goal in the US agriculture industry going forward is focused on using technology to make the food and feed markets as safe, efficient and productive as possible in order to meet demand of more than 9 billion people globally.

Doud said the US would like to establish trade deals with those countries, however, as Tabor put it, “We’ve got to get on the same page if we’re going to try to solve some of these problems.”

When asked if the US is pursuing trade with other countries, Doud said, “I recently made a trip to Thailand, Vietnam, Geneva and Ireland all in a week, and had extraordinary conversations with Vietnam, making some progress there.” He also said he has spoken to and made progress in talks with Indonesia and India.

“The point being that in this type of discussion… there isn’t a rock big or small that we haven’t turned over to see what’s under there,” Doud added. “We are looking high and low, looking to fix all kinds of problems that we can and diversify the portfolio.”