Visitors to David Lapp’s farm, Country Meadows Farms, hoping to see his pigs should be ready to look hard for them, and maybe even be prepared to go off the beaten path to find the animals that he uses to make his top-of-the-line bacon, as well as his other pork products. Lapp’s pigs, which number between 100 and 125 each year, are raised in a forested area of his farm, near Quarryville, Lancaster County, in Southeastern Pennsylvania, not far from the Maryland state line.

The pigs Lapp and his two brothers, Reuben and Amos, raise are part of what’s a pretty typical farm operated by this Amish family. In addition to the pigs, the brothers also raise beef, chickens and lambs for meat. They also sell turkeys and layer hens for eggs. The beef is grass-fed, and the chickens are pasture-raised. But the pigs that are raised for his bacon demand a big part of David Lapp’s attention.

All of the farm’s animals are raised in humane and environmentally friendly conditions, including its pigs. “I raise old-fashioned breeds of pigs, because I want our bacon to achieve certain things,” Lapp says. His pigs are heritage breeds and they include Old Spots and English Blacks, animals not seen too commonly anymore, as well as some Berkshires.

Gloucestershire Old Spots is a historic pig known for its distinctive white coat with black spots, first developed in the Berkley Vale of Gloucestershire, England in the 1800s. Lapp selected them because they’re excellent grazers and foragers, doing well in the woodsy pasture where Lapp keeps them.

His English Black pigs are also native to England, to Cornwall, Devon and Somerset. They became popular in the last half of the 1800s, and are very large and well-suited for pasture and other types of foraging. English Blacks have traditionally been used in small-scale production of bacon and pork, which is why Lapp became interested in the breed. He also wanted English Blacks because the sows have a great reputation for raising and weaning large litters of piglets outside, which Lapp does. In fact, the numbers of these breeds have been growing, and are being removed from “endangered breed” categories.

“These animals are different than white pigs. One of the main differences is they’re not as lean as white pigs, such as Yorkshires,” he points out. And raising these animals for bacon ties in with the increased interest consumers have in pasture-raised pork. 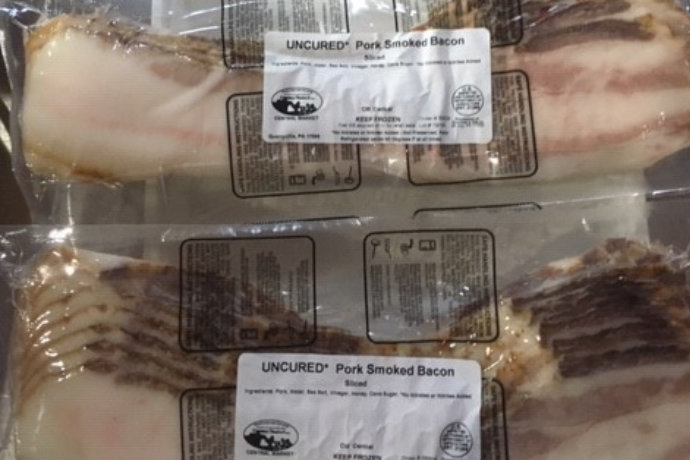 “I have sows and boars, with animals ranging from a day old to eight to 10 months. When they reach that age, they go for slaughter,” he says. The breeds are picked based on their characteristics, “and certain breeds have characteristics that you are looking for, that will work well for the product that you’re making. These characteristics might include bigger loins, hams, shoulders, bellies.” Lapp makes bacon from the bellies, of course, but also makes English or cottage bacon, and what he calls “country bacon,” from the animals’ shoulders.

One trait he’s looking for is more fat, to create a balance that means more flavor. “So, our bacon has more fat in it than what I would call ‘commercial bacon,’” he points out. “We raise our pigs to have healthy fat – good fat, because fat is where the flavor comes from.”

“To accomplish this, we feed the pigs a feed I create myself. It’s a mix of corn, soybeans, barley and oats. I add Fertrell, a vitamin/mineral premix for swine,’ he says. “We want to get our pigs fat within 10 months.” Lapp notes that some farmers feed their pigs without grain.

Most of all, Lapp thinks it’s most important to give his pigs lots of space to forage. “Once the pigs are eight weeks old and weaned, they go into my woods,” he says. “And they’re raised there – in the woods. Why? “Because the woods are a natural environment for them, I think, rather than being penned up in a barn. I like raising my animals as close to nature as I possibly can.”

One advantage of having the pigs in the woods is that in the fall, the animals can forage on acorns, he says. So, all of Lapp’s pigs are raised in these woodlot pastures, where they also have plenty of room to roam freely.

There are no nitrates or nitrites in Lapp’s uncured Country Meadows Farms bacon. “We like to give that option to our customers,” he says.

Much of the bacon Lapp makes is sold at retail, largely at Central Market in downtown Lancaster, the oldest continuously running public farmers market in the United States. Lapp does some wholesaling, as well.

“We sell some of our pigs to other producers, who do their own processing. We also sell to other farmers who have more demand for bacon and pork than what they can raise themselves.” Another market for Lapp’s bacon has been Lancaster Farm Fresh, a cooperative in the region that consumers can join and buy from, including meat and poultry.