Meat processing with vim and vinegar

Vinegar is the fate of drinking or grain alcohol exposed to oxygen and acetic acid bacteria, those from the genus acetobacter. These bacteria metabolize alcohol into water and acetic acid, producing the very stable, multi-functional liquid known as vinegar.

Vinegar is one of the few products around today that has been in grandma’s kitchen for centuries, making it a clean-label ingredient. Often described as sour to the taste buds, vinegar ingredients have long been appreciated by meat and poultry processors for their contribution to tenderizing, preserving, enhancing flavor and even influencing color. Suppliers offer vinegar ingredients in dry and liquid extract format, with or without other functional or flavorful ingredients. It’s a natural ingredient, albeit one that is not federally regulated with a standard of identity in the US.

The US Food and Drug Administration only addresses vinegar in its Compliance Policy Guides. The agency says that an ingredient can be labeled vinegar when the product contains in excess of 4 grams of acetic acid per 100 milliliters. When vinegar is diluted with water, the label must bear a statement indicating such, as well as specify the acetic acid strength as a percentage, with that percentage always being greater than 4 percent.

Although acetic acid is the primary constituent of vinegar after water, acetic acid is not vinegar. Vinegar contains many vitamins and other compounds inherent to the substrate material. Some of these are responsible for imparting color and unique flavors to vinegar. Some vinegars further develop color and flavor from being fermented or aged in wood barrels. There are many varieties of commercial vinegar, which are often used in meat and poultry marinades.

Vinegar production is a two-step process, with the first step requiring a sugar-containing ingredient in solution. This may be anything from fruit juice to malt to rice. The process begins with yeast feeding on the sugar and fermenting it into alcohol. The second step involves the acetobacter feeding on the alcohol, fermenting it into a sour-tasting byproduct, which the French first dubbed vinaigre, or “sour wine.”

The type of vinegar produced, and its corresponding color and flavor, depends on the substrate being fermented. Depending on the variety, vinegar can contribute buttery, malty, savory, sweet and even woody flavors.

Distilled white vinegar is the most common and most economic vinegar. It is industrially produced using grain alcohol as the base material and is almost pure acetic acid without any color or flavor. Balsamic vinegar, on the other hand, is likely the most expensive and complex vinegar, with color and flavor varying by grape combination and aging process.

Although balsamic is often classified as a wine vinegar, it is not, since it is not made from wine. It is produced using a single-step process with a special yeast and bacterial culture mixture fermenting grape pressings, also known as must. This is a juice that is not first fermented into wine. Rather, the concentrated grape juice is converted into alcohol and acid at the same time. Balsamic vinegars further undergo a lengthy aging process for color and flavor development. 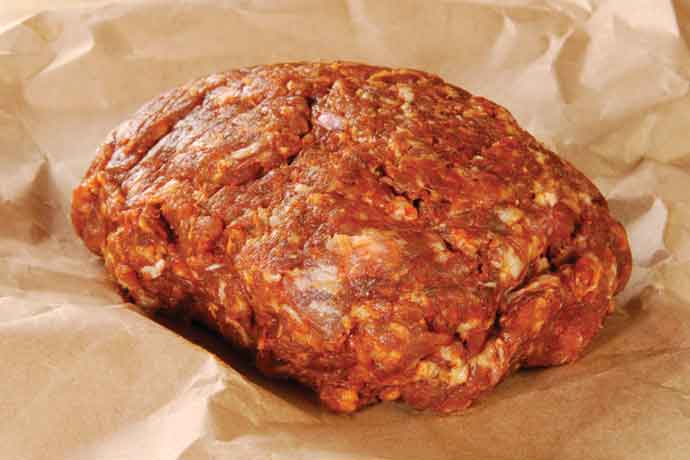 Acetic acid, like other acids, are volatile molecules that release positive hydrogen ions. These ions exert various effects on other molecules in foods, including meat and poultry.

Culinary professionals know that a small amount of vinegar makes food taste bright and fresh. Too much, however, may make the food unpleasantly sour.

First and foremost, vinegar is used as a tenderizer for meat and poultry. It may be added as an injected marinade in very tough proteins or applied via a soak or rub. It’s never directly added as only vinegar. With marinades, vinegar is mostly included with stock, seasoned water or fruit/vegetable puree. Rubs for roasts or steaks may use a slurry of vinegar, oil and seasoning.

It is the vinegar’s free hydrogen ions that tenderize. They interact with proteins, altering their molecular structure and changing their texture and consistency. Vinegar breaks the chemical bonds that hold protein chains in a twist, causing the proteins to denature or unravel. This is the act of tenderizing. Excessive marination may result in a mushy protein. Sometimes the unraveled protein chains form new bonds, causing the proteins to coagulate and creating a much more rigid structure. They may tighten, squeezing out the water and causing the protein to become tough.

Vinegar is included in the manufacture of many varied sausages and charcuterie. Functions include tenderizing the meat as well as contributing a fermented sour-like taste. Artisans will often soak natural animal casings in a weak vinegar solution, as the vinegar contributes to a more tender eating experience.

Mexican-style chorizo, also known as fresh chorizo, is a soft, crumbly product, not to be confused with Spanish chorizo, a harder salami-type sausage. Vinegar is the key curing agent in fresh chorizo. The comminuted meat, chilies, seasoning and vinegar mixture requires often as much as four to six days of refrigerated curing to enable the vinegar to do its work on texture.

Many international sausage recipes were developed with the purpose of using tougher cuts of meat and trim that might otherwise go to waste. They often rely on vinegar to assist with tenderizing. Some also use vinegar to provide desirable taste. Longanisa fresca, for example, is a pork sausage from Mexico that is flavored with wine vinegar. Makanek is a Lebanese sausage made with pork, beef or lamb, along with pine nuts, cumin, cloves, cognac and white vinegar.

Boerewors is a type of sausage found in South African cuisine; however, its origins are Dutch. It’s made with beef or pork, along with ground coriander, red wine vinegar, thyme and Worcestershire sauce. Traditional Moroccan beef sausage, a dried charcuterie-type meat, includes all-spice, garlic and vinegar.

With dry sausages, vinegar does more than tenderize at the beginning and add flavor for enjoyment. It also may assist with preservation. With some dry sausages, surface mold may be part of the flavor development process. While desirable mold grows, some less desirable mold may invade the drying chambers. In these instances, wiping the surface of the sausages with a 2 percent to 4 percent vinegar solution will assist with removing the mold while also preserving the flavor already developed.

Malt vinegar is a trending ingredient that culinary professionals are exploring for the use of tenderizing and adding flavor to meat and poultry. Made from malted grains of barley, the same grains that are used for making beer, the vinegar has a lemony, nutty and caramel flavor profile that resembles malted ale. It also has color, which ranges from light to dark brown, and can be a source of natural brown in white meats such as chicken, pork and turkey. It can be used to make meat glazes or applied as a drizzle after frying to add desirable color and enhance flavor.

Sometimes vinegar is simply part of the sauce that tops prepared meat. Sambal, for example, has been identified as an up-and-coming Indonesian-inspired hot sauce made from a variety of chili peppers, along with shrimp paste, fish sauce, garlic, ginger, shallot, scallion, lime juice and vinegar. 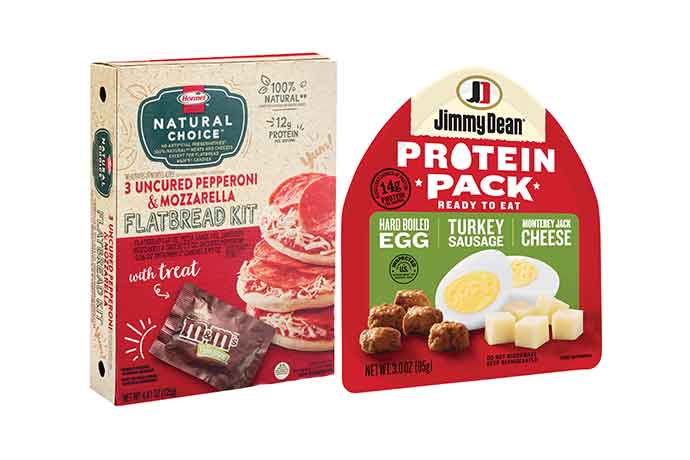 Organic acid salts are some of the most effective antimicrobial agents used in meat and poultry products. They get buffered, also known as neutralized, with a conjugate base. Propionic acid is recognized as being the most effective of these acids; while vinegar, a natural source of acetic acid, is now being used by processors as a label-friendly, all-natural antimicrobial.

Their mode of action on pathogenic and spoilage microorganisms is the same, but their effectiveness varies by the organic acid, specifically the amount of undissociated or non-ionized acid. It is the undissociated acid that can penetrate microbial cell walls. Once inside the microorganism, where the pH is near or above neutral, the acid dissociates, lowering the pH. With pH-sensitive microorganisms, including the pathogens and spoilage bacteria encountered in the meat and poultry processing and distribution environment, this change in pH impairs or stops growth. Further, the anionic parts of the organic acid, which are the negatively charged ions, that remain in the microorganism will accumulate, disrupting metabolic functions. This leads to an increase in osmotic pressure that destroys the microorganism.

Buffered vinegar solutions have no negative effect on meat quality, including parameters such as water-holding capacity, protein denaturation, color or flavor. They may be added to brines, marinades, spice blends or directly applied to meat.

Buffered vinegar systems may contain either sodium or potassium cations. Manufacturers trying to manage sodium content levels will often opt for the potassium version. They are equally effective at inhibiting growth of pathogens and spoilage bacteria; however, depending on application, there’s always that chance the slight bitterness of potassium may be detectable.

Available in liquid and dry formats, the dry version of buffered vinegar systems is almost four times as strong as the liquid, which means usage levels are lower with the dry product. They can be simply declared on ingredient statements as “vinegar” or “vinegar powder.”

Rosemary and green tea extracts are often combined with buffered vinegar for a multi-prong approach to extending shelf life by addressing color retention and food safety with one ingredient. Often times when combined together, the ingredients work synergistically, allowing for a lower usage rate for the same effect.

Some suppliers offer all-natural, clean-label pathogen protection ingredients made from fruit and spice extracts. They are often described as true “uncured” ingredient solutions, as they are free of celery-based ingredients, which are inherent sources of natural nitrates and chemical nitrites. Such ingredient systems use several hurdles for pathogen control, including polyphenol and flavonoid antioxidants, as well as dried vinegar. Blends of essential oils and oleoresins have also been shown to exert food safety benefits.

Most buffered vinegar natural antimicrobials can be added directly into the meat and poultry item or used as a topical treatment. Use has been shown in some applications to double the shelf life in fresh products. Such vinegar ingredients are considered a clean-label alternative to conventional lactates/diacetates historically used for meat and poultry shelf life extension. Vinegar ingredients are often designed for specific applications, such as whole muscle, raw ground, fully cooked deli-style meats and fresh sausage.