We use cookies to provide you with a better experience. By continuing to browse the site you are agreeing to our use of cookies in accordance with our Cookie Policy.
Home » Forecasting the future of science

Forecasting the future of science

Advancements in science allow for technological innovations throughout the food industry supply chain. It’s no longer simply a farm-to-table story. It may start with a seed or in a petri dish. The key to success lies in understanding what consumers will accept and embrace, according to The Hartman Group, Bellevue, Washington, which held the Food Culture Forecast 2019 summit in Chicago on Sept. 12.

Navigating this new playing field is not easy, especially with consumers’ evolving opinions. The fact remains, science is necessary to feed the projected 9.7 billion humans who will inhabit earth in 2050. The types of technology consumers will allow to meddle in their food is unpredictable but the researchers at The Hartman Group shared insights addressing where we are and where they think we will be in the near future.

This includes a variety of proteins, holistic plant-based foods and responsibly grown meat. They also want more accountability from food companies, as well as education. They want to understand how foods affect their bodies, today and long term.

Today’s consumers are food smart and are less likely than previous generations to fall for hype and marketing. They have learned to evaluate food production innovations according to four overlapping arenas: lab, field, factory and kitchen. They are asking more questions and want truthful answers.

“Field and kitchen innovations are most appealing, while those that are more clearly lab-based are the least attractive,” Balanko said. 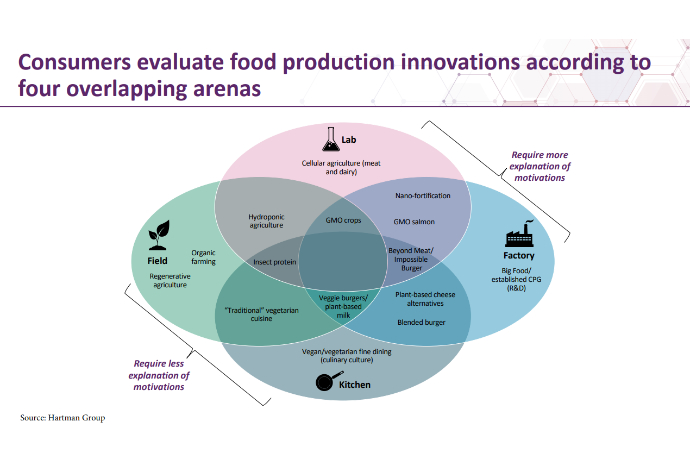 Sarah Marion, director of syndicated research at The Hartman Group, explored the historical role of plants in the human diet — bread is one of the original plant-based foods — and the many definitions of plant based. While plant-based processed foods are not going away any time soon — think lentil pasta, pea protein smoothies and veggie burgers — Marion emphasized that today’s consumers are smart. They are asking questions and reading labels. She fears that the term “plant based” is quickly being diluted much like “natural” and “organic.”

Iva Naffziger, director-marketing research and strategic insights at The Hartman Group, explored the varied types of protein alternatives in the marketplace. She explained that meat production and consumption continues to grow; however, while small in volume compared to meat, meat substitutes are growing rapidly.

“Many consumers are adding alternative proteins into their diet, not replacing meat,” she said.

This all comes back to diet personalization and consumers’ attitudes and opinions toward the four overlapping forms of food production. Health-related considerations are particularly important at meat substitute meals.

Two-thirds of consumers consider if a meat substitute is made with simple, real ingredients, according to The Hartman Group compass database, 2018. Being high in important nutrients, such as protein and fiber, influences meat substitute selection for 61 percent of consumers, and 57 percent say the meat substitute has to have better flavor than its ordinary counterpart. 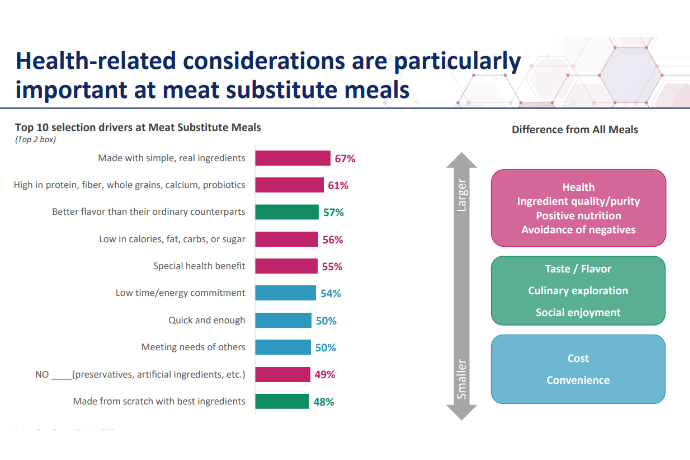 Traditional plant-based meat substitutes are perceived as healthier options that still compare in taste. And, blended products, such as burgers that are half meat and half plant, resonate with consumers’ approach to reducing animal products.

“Plant-based meat alternatives that mimic real meat are an exciting option for vegans and carnivores alike,” she said. “While the pros and cons of cellular meat are largely unknown due to lack of familiarity.

“While insect protein may be a sustainable protein option, the ‘ick factor’ is difficult for most to get past,” Naffziger said.

In conclusion, Naffziger said that today’s consumers do look under the hood.

“Consumers are looking for healthier sources of protein and other nutrients,” she said. “They want shorter, cleaner ingredient panels. Alternative proteins need to ensure their ingredients are simple, pure and not too many. They should be avoiding excessive fat and sodium.

“Consumers are concerned about excessive processing. They are skeptical of lab-based innovations and unfamiliar production methods,” Naffziger continued. “Positioning production methods as a farm- or kitchen-level approach, rather than lab-made, may be advantageous for all alternative proteins.”