We use cookies to provide you with a better experience. By continuing to browse the site you are agreeing to our use of cookies in accordance with our Cookie Policy.
Home » Hormel’s bacon roots extend into multiple retail channels

The production of bacon has been an iconic part of Hormel Foods since the company’s very beginning, when George A. Hormel founded the company in Austin, Minnesota, 128 years ago, in 1891. So, it’s no surprise that bacon has played an important part in the company’s growth and development all those years – and continues to be an expanding part of the company today.

“That’s true on both the retail and the foodservice sides of Hormel Foods,” says John T. Hernandez, brand manager for Hormel’s breakfast meats portfolio. “It’s been an integral part of the company’s refrigerated foods division.” In fact, bacon has annual sales of $500 million in retail and club sales.”

No doubt, a lot of this has to do with bacon’s continuing and growing popularity in American and worldwide food consumption. “We certainly keep up with this trend. One way is by talking to our consumers and customers, the people who love bacon, virtually every day of the week,” Hernandez says. “We know bacon is not just food – it’s something that people love with a great passion.”

For bacon in its retail and club sectors, Hormel has several bacon brands available for consumers. One is Applegate, which is the No. 1 brand in the United States in both the organic and natural bacon category. Applegate offers Uncured Sunday Bacon, Thick Cut, No Sugar and Turkey Bacon, on the natural and organic sides. Another is brand is Hormel’s iconic Black Label Bacon, Hormel’s original bacon label, which includes Black Label Original, Thick Cut Bacon, Natural Choice, Original Uncured, Cherrywood Smoked Uncured, and Natural Choice Fully Cooked. Hormel’s Jennie-O Turkey Store offers turkey bacon, as well as blueberry and jalapeno flavors.

“These bacons include both raw, for people who like to cook their own, and already fully-cooked, for those who like to have it already prepared for them,” Hernandez says. “The Natural Choice contains no nitrites or nitrates, except for celery powder. For customers who want lower salt, that’s also available from our Black Label brand. We also offer a lot of bacon toppings that can be added to hamburgers, pizza, you name it.” As bacon has moved away from being a breakfast-only accompaniment, the list of toppings has grown. 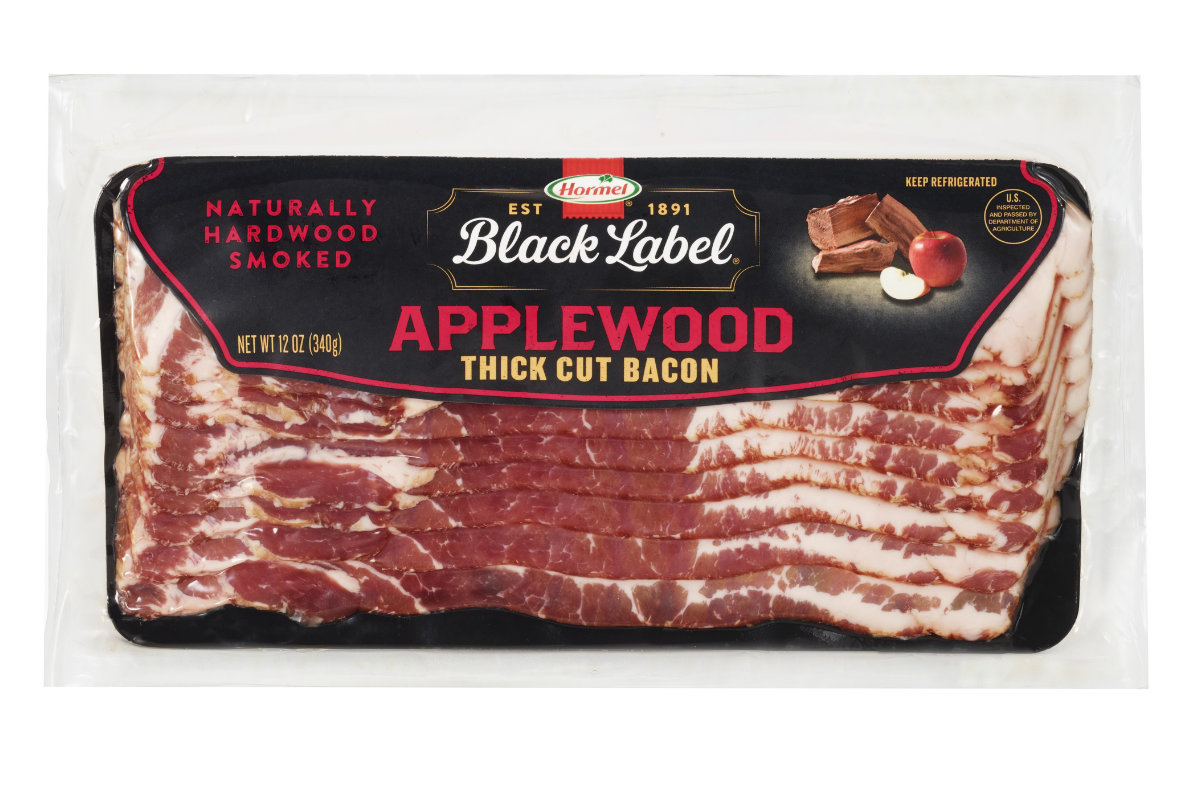 The bellies used to make Hormel bacon for retail sale are of the highest quality, he says. “We hand-trim our bellies, resulting in specialized cuts, then they are cured, smoked and sliced.” The large number of Hormel bacon offerings have come about as a result of the demands consumers place on the company for products that can be prepared quickly and easily today.

Wholesale clubs have become important customers for Hormel Bacon’s retail side, including Costco, Sam’s Club, BJ’s Wholesale Club and others. “Our club business has to be geared for our customers who patronize those clubs. They are usually large families. So, for Sam’s Club, as an example, we offer 72-count bacon, which is 3 lbs., and is fully cooked. Fully cooked is a convenience category for us. If a family wants the full bacon experience for themselves, they likely would buy “raw” product, then they can make it their bacon either crisp or fluffy.”

“Internally within the Hormel Foodservice Division, bacon is among one of the favorite categories to sell. In addition, it is an essential ingredient for most foodservice customers,” she says. “In the foodservice area, our foodservice portfolio consists of both raw and fully cooked bacon items. Each of these categories are made up for three quality tiers in order to meet the needs of a wide array of customers,” Mueller explains.

The foodservice operation at Hormel has some products that are growing rapidly in demand, like Hormel Bacon 1 Brand. “This is a fully cooked bacon that tastes and performs like it was cooked from raw,” Mueller explains. “This brand was launched in 2014, and has been a game changer in the industry, as it provides operators with a great tasting, fully-cooked bacon, without all the pain points that come along with cooking raw bacon,” she points out.

Bacon has taken off not only with home cooks in the past 10 or 15 years, but also in foodservice as well, with a popularity that is expected to last indefinitely. “Specifically speaking about the foodservice industry, bacon is a staple ingredient on foodservice menus across all segments,” she says. “In fact, it shows up on 71 percent of all US menus, according to Datassential. Bacon has the power to elevate a dish and drive flavor on any application it’s added to,” Meuller emphasizes.