We use cookies to provide you with a better experience. By continuing to browse the site you are agreeing to our use of cookies in accordance with our Cookie Policy.
Home » How Sarge’s Delicatessen and Diner shares old-school traditions 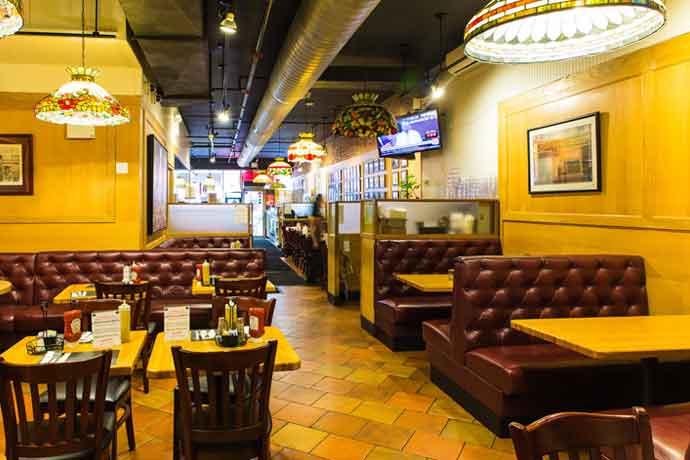 Sarge’s is representative of the Jewish delis that were once considered the backbone of New York City dining. Though today, establishments like Sarge’s are becoming the minority. Changing neighborhoods and an expanding global dining scene have become formidable competitors for delis throughout the city. As a result, well-known Jewish-style delis such as Ben’s Best Deli and Carnegie Deli have chosen to close their doors after decades of service. Keeping with Old World tradition, the deli’s décor looks much like it did 55 years ago under Abe’s tutelage. Lamps throughout the deli are still ornamented in Tiffany lamp shades and customers sit in Naugahyde booths among hanging salamis and receive service from waitresses with a 20-year tenure.

As an old-school deli and diner, Thall believes what sets Sarge’s apart from other New York City Jewish-style delis is a continuing commitment to featuring foods made from scratch. Ninety-nine percent of Sarge’s products are made in-house, including a wide range of cured in-house meats using recipes created by the original owner, Sgt. Abe Katz and passed down to subsequent generations. In addition to in-house cured meats, Sarge’s makes its own homemade soups, salads and desserts.

“I really believe the key to the longevity of our restaurant is the quality of the food we produce,” Thall says. “Everything is made by our own cooks. We provide good portions and the food is top quality. We even make our own fries. You just can’t get foods made like this anymore.” 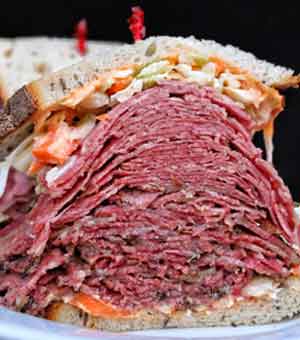 For 55 years, Sarge’s has cured its meats in-house, using the same brines and rubs, proving it makes sense to stick with what you know. The top-selling corned beef and pastrami have their own spice blends, and each is coated with a rub that was originally formulated by Abe and is still in use today. While admitting in-house curing is a labor-intensive process, Thall shares the satisfaction of having customers return to tell them Sarge’s corned beef and pastrami is the best they’ve ever eaten. He concurs with those opinions saying, “you just can’t buy these meats from a distributor.”

Considered an “endangered” deli meat, rolled beef is a cured cold cut described by some as a pastrami and salami hybrid. Only made by a handful of delis throughout the country, the pink-hued meat, similar in color to pastrami, holds mythical-like status among deli lovers and food bloggers.

While few agree on how to define rolled beef or where it originated, the ambiguous legends continue to add to its appeal. The deli also sells ham, bacon and sausage, not produced in-house, but remains best known for the meats commonly used to build a New York deli sandwich, according to Thall. When it comes to sales, the corned beef and pastrami continue to top the chart, particularly around the Jewish holidays.

In addition to supplying diners with a menu of more than 200 items, including a large variety of Jewish-style foods, salmon, breakfast and burgers, Sarge’s is known throughout the city for anything with a Jewish flair, according to Thall. During the Jewish holidays, Bloomingdale’s asked Sarge’s to offer in-store sampling of Jewish-style foods. The diner regularly finds itself topping several “Best of” lists including being ranked No. 4 on Time Out New York’s Best Jewish Delis in NYC and is considered one of NYC’s stellar Jewish delis by Eater New York, making it an iconic place to dine for locals and tourists alike.

“On every box that goes out, we place a sticker on it that says, ‘Packed with love.’” — Steve Thall, vice president of Sarge’s Delicatessen and Diner

Sarge’s is also the maker of “New York’s Biggest Sandwich.” Called the “Monster,” the piled-high sandwich serves three to four people or one hungry person, according to the website. Each sandwich contains 1/3 lb. each of in-house cured pastrami, corned beef, roast beef, fresh roast turkey and salami served on thick-sliced rye with tomato, lettuce, coleslaw and Russian dressing. Customers can order the sandwich fully assembled or as a construct-it-yourself kit. Customers can also find barbecue packs and brisket, corned beef and pastrami sandwich kits. 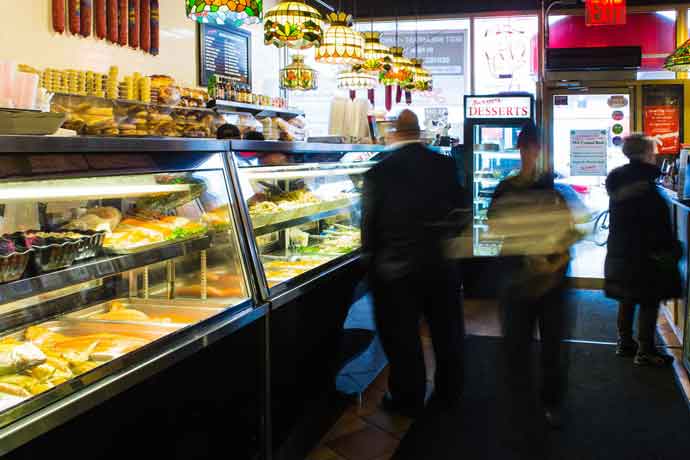 Sarge’s currently offers dine-in, takeout (delivery or pick-up), catering and online services with shipping to the lower 48 states. Looking to cut its delivery times, Sarge’s is setting up a new location to offer delivery to lower Manhattan. The commissary kitchen will make all the items Sarge’s is known for, including its in-house cured meats, for delivery only. With the expansion, they are also entertaining new licensing opportunities.

“This will improve our ability to serve locals in multiple parts of New York City quicker than they get food out of our 3rd Ave. location,” he says. “It will make delivery shorter and open up Sarge’s to different neighborhoods. It’s also an opportunity for us to go into Chicago, Atlanta, Miami and beyond. People can reach out to us from all over.”

Sarge’s food is always shipped for next-day delivery, and nothing is ever frozen. While sales from dine-in and take-out services are largely proportionate, Thall says most online orders always include an order of meat.

“On every box that goes out, we place a sticker on it that says, ‘Packed with love,’” Thall concludes. “That’s really what makes Sarge’s special and unique. Our food has a lot of the Sarge’s love and when you do this you always get a good result.”