We use cookies to provide you with a better experience. By continuing to browse the site you are agreeing to our use of cookies in accordance with our Cookie Policy.
Home » CSU shows off latest investment in education

This past March, MEAT+POULTRY was given an exclusive preview tour of Colorado State Univ.’s (CSU) JBS Global Food Innovation Center in Honor of Gary & Kay Smith. With electricians, plumbers, painters and equipment engineers hustling in the background, an anticipatory buzz signaled the $20-million-plus, 38,000-sq.-ft. project was in its final phases of completion to the delight of students, alumni, JBS executives and CSU faculty members. The official festivities were indeed held April 9, highlighted by JBS USA CEO Andre Nogueira cutting the ceremonial ribbon alongside Gary Smith, Ph.D., Robert Delmore Ph.D., who led the project, and Keith Belk, Ph.D., a former student of Smith’s and current holder of the department’s Ken & Myra Monfort Endowed Chair in Meat Science with the Center for Meat Safety & Quality. The center is dedicated to Gary Smith, a renowned expert in meat science and food safety, a University Distinguished Professor Emeritus, and his late wife, Kay.

About two years ago, officials with JBS USA, based nearby in Greeley, agreed to support CSU’s Dept. of Animal Science project with a $12.5 million investment to help fund the construction of the two-story facility and to provide its employees with educational opportunities. CSU and JBS have a longstanding partnership coupling the university’s research resources with the company’s industry leading operations. The company is also helping provide potential future employees at CSU with facilities and equipment that mirror commercial processing plants and prepare them to work in the industry by training them in real-world environments.

“JBS is, more than anything, a people business,” Nogueira said after cutting the ribbon. “So, we really see this as an investment in people – the people who will come here to learn industry best practices and innovation for generations to come.”

The project was one of the final phases of a multi-year renovation of CSU’s Dept. of Animal Science facilities, which included a 2014 expansion of the original building. During the festivities, Ajay Menon, dean of CSU’s College of Agricultural Sciences said working closely with JBS on the innovation center portion of the project makes sense not only today, but in the future.

“JBS provides that necessary partnership – our goals and values align well with theirs and we’re very grateful for their support,” said Menon during his remarks at the grand opening. “Our goal for this facility was not only to support teaching and research – it has to impact the industry and advance the way meat processing is done around the world.”

Delmore, who led the project and M+P’s tour in early March, said that ramping up the operations was not unlike a typical start-up of a commercial plant. Having worked on the operational front lines at Clougherty Packing Co.’s Farmer John plant prior to his academic career, he has been a part of significant plant renovations and construction projects. At the time, Delmore expected slaughtering and processing operations at the new plant to begin by April 25 if not sooner.

For Delmore, this project was uniquely challenging because it included blending the operations of a multi-species slaughtering facility with processing, further processing and ready-to-eat processing and packaging in the heart of a large, bustling college campus. “When you build these things at a university, you have to meet everyone’s needs,” he said, “and you’ve got to meet the university’s needs. It was a hard project because it’s not exactly traditional; we changed a lot of things as we went.”

The result included creating laboratories, faculty offices and meeting spaces, a demonstration kitchen, a test kitchen, classrooms, a retail store and useful common areas for students to meet and collaborate. Construction included using a pre-engineered metal building material to add on to the back of the existing Dept. of Animal Sciences facility and utilized a portion of a former parking lot and some greenspace in front of what is now the entrance to the innovation center. The project also included the addition of a 2,800-sq- ft. kill floor and 3,600 sq. ft. of processing space.

“One of the things we needed was more space to interact with other people,” Delmore said of the design of the new space. One of those many spaces is a sizeable conference room, The Harris-Wood Boardroom, named after and sponsored by Dave Wood and John Harris (from Harris Ranch Beef Co.), located on the second floor of the facility. There are also six faculty offices on the second floor, in addition to two visiting scientist offices, one named after Gary Smith and one next to it named after Temple Grandin, Ph.D., a professor of animal science at CSU since 1990 and world-renowned animal handling expert. The new second-story space also accommodates two new chemistry labs and a sensory lab.

Meeting spaces, some of which are open concepts while others are glass enclosed, are prominent throughout the new space as are restrooms, Delmore pointed out. The state-of the-art control room for the processing plant directly below is also housed on the second floor, which posed a logistical challenge to insulate the rest of the building from the sounds and aromas from the commercial meat plant on the first floor. While looking around the control room Delmore said, “It’s evident that when we laid this out, we worked with industry folks and people who are familiar with building traditional plants and are also familiar with building university-based plants.

“We built it the same way you would build a commercial plant, but it’s just a smaller version,” he said of the LEED Certified project.

Adjacent to one of the many common areas on the first floor is a sponsored retail food store, the “Where Food Comes From” Market, where the meat science department can market and sell the products it makes during the educational process.

“They are working with us to not just market our meat lab products, but also make this an educational experience for students,” he said. “Our customers like to interact with the students and that allows our students to inform and sometimes educate those customers.”

Just outside the store is a serene courtyard where students gather to collaborate or just relax. It is highlighted by a 6-ft. bronze sculpture of Gary Smith and his wife and the JBS branded name of the facility. The sculpture of the Smiths and another of Grandin, were designed by Dave Anderson, a CSU affiliate faculty member and a former researcher with Elanco Animal Health.

Also, near the first-floor entrance is a 140-seat, auditorium-style classroom equipped for meat science lectures and hands-on demonstrations. An overhead rail system crosses the front of the classroom to facilitate rolling carcasses in and out of the teaching area from an adjacent cooler and connecting to the processing plant. “That’s something we haven’t had here in a long time,” Delmore said of the rail system. The classroom is also wired with audio-visual technology and a large, washdown-ready display area at the front.

A first-floor demonstration kitchen was designed like JBS’ demo kitchen in Greeley, complete with granite countertops, commercial grade stoves and ovens, an Italian-made dry-aging cabinet, and many other features designed to accommodate students or visiting food companies.

Not far from the demonstration kitchen is the restricted access entry to the US Dept. of Agriculture-inspected processing plant. Delmore’s voice echoes as he announces the entry into the USDA-inspected part of the facility. A common hallway feeds all the parts of the processing facility. When designing and building the plant, the emphasis was on sanitation, durability and ease of cleaning.

Providing passersby with a look into the ready-to-eat part of the processing plant is the intent of one large window in the first-floor atrium. Behind the glass two Enviro-Pak pass-through ovens are situated, a rarity in many university meat labs. “You load here, and you unload on the ready-to-eat side,” Delmore said, “so we have a ready-to-eat packaging area that is separate from raw production. This is a nice, bright shiny spot where people can look in and see what’s going on in the facility.”

Equipped with LED lighting throughout, the processing plant is designed to demonstrate principles of meat processing using technology and workspace that mirrors a commercial meat processing plant. The design of the plant’s animal handling area and slaughtering system were overseen by Grandin, who accompanied M+P on the tour. The slaughter facility is equipped to handle cattle, hogs, sheep and even poultry on a limited scale. Grandin was most pleased at the attention paid to building the entire facility with quality infrastructure, which will serve as a long-lasting foundation for future advancements in the industry’s ever-changing technology.

“You can always change the furniture,” she said of the evolving equipment and technology available under-roof areas, “but I’m really glad to see investing in infrastructure initially.” Grandin pointed out an example of this being the thigh-high cement curbing that flanks each side of the plant’s main hallway, designed for easy washdown and to protect the structure for years to come.

The space now used for department head offices, academic success coordinators and a conference room was previously the harvesting floor at the original building, where slaughtering was conducted on campus for more than 30 years. “From ’59 to ’93 we slaughtered in this building; 1993 is when we took it out,” Delmore said. Livestock slaughter was moved off campus to a university-owned facility for about 10 years, which was less than ideal for a variety of logistical reasons. 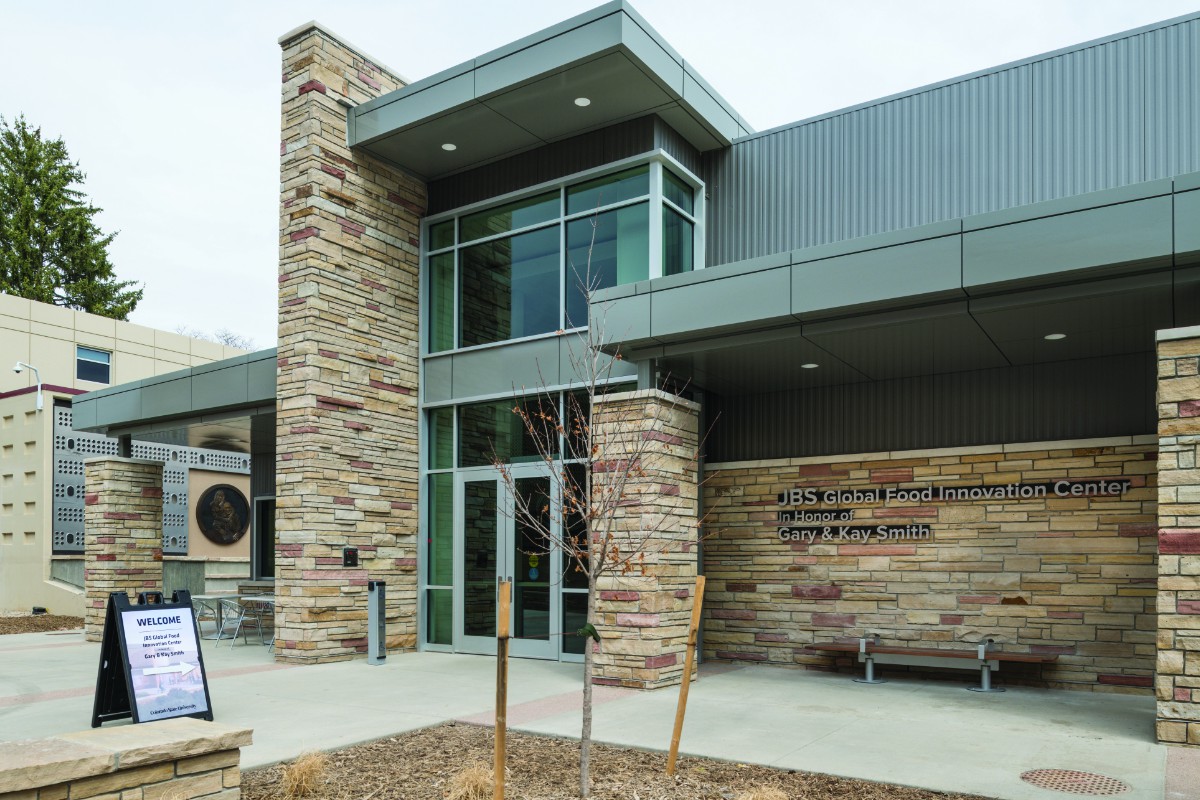 Since about 2003, CSU has partnered with a local processor, Innovative Foods in Evans, Colorado, where animals for the Dept. of Animal Sciences were slaughtered. As part of the new facility, slaughter has returned to the CSU campus, which was a significant change. “We’re happy now that it has come back full circle and we can now slaughter on campus,” Delmore said.

Inside the plant is also a small locker room area, restrooms and shower facilities designed for use by students and visitors to the plant as well as a commercial kitchen to accommodate not only research but also to serve as a food storage and preparation area for the department’s catering services, which generates revenues for its meat judging team.

The processing area is equipped with the basic tools of the trade, including carcass splitting equipment, a hog dehairing cabinet, a bowl chopper, grinding equipment, stuffers and much more. Processing areas are designed for flexibility, whether it is to process meat to sell or demonstrate processes students might see in a commercial plant.

“This isn’t a commercial production facility, but it is like a plant,” Delmore said, “and just like a plant, we want it to run. We tried to make really good use of our footprint,” he added. “There’s not a lot of waste.”