We use cookies to provide you with a better experience. By continuing to browse the site you are agreeing to our use of cookies in accordance with our Cookie Policy.
Home » Tyson introduces new plant-based, blended products

SPRINGDALE, Ark. — Tyson Foods Inc., is investing in innovation that includes less meat. The company is launching its first plant-based and blended products, including a new brand called Raised & Rooted. These innovations make Tyson the largest US meat producer to enter the alternative protein segment with its own products, Tyson said.

“Today’s consumers are seeking more protein options, so we’re creating new products for the growing number of people open to flexible diets that include both meat and plant-based protein,” said Noel White, president and CEO of Tyson. “For us, this is about ‘and’ — not ‘or.’ We remain firmly committed to our growing traditional meat business and expect to be a market leader in alternative protein, which is experiencing double-digit growth and could someday be a billion-dollar business for our company.”

Tyson’s new Raised & Rooted brand was “created to provide great-tasting plant-based and blended foods that are rooted in how people eat today,” Tyson said. The products were developed by Tyson’s innovation, culinary and consumer insights teams in Chicago and its headquarters in Springdale.

Under the new Raised & Rooted brand, Tyson will debut its first meat-free product: plant-based nuggets. Made with pea protein isolate, egg whites, flaxseed and bamboo fiber, the nuggets feature crispy tempura batter with plant protein fibers that provide a meaty texture, Tyson said. The nuggets provide nine grams of protein and five grams of fiber per serving and contain 33 percent less saturated fat than US Dept. of Agriculture-approved all-white meat chicken nuggets, according to the company. New Raised & Rooted plant-based nuggets are slated to roll out in late summer.

“The creation of the Raised & Rooted brand is an excellent example of Tyson’s ability to think big and move fast, capitalizing on our existing infrastructure,” said Justin Whitmore, executive vice president of alternative proteins and chief sustainability officer for Tyson Foods. “We began development of our alternative protein products last year and have succeeded in creating a new brand and bringing those products to market in well under a year. Customers tell us they love the taste and nutritional attributes and are excited to partner with us.” 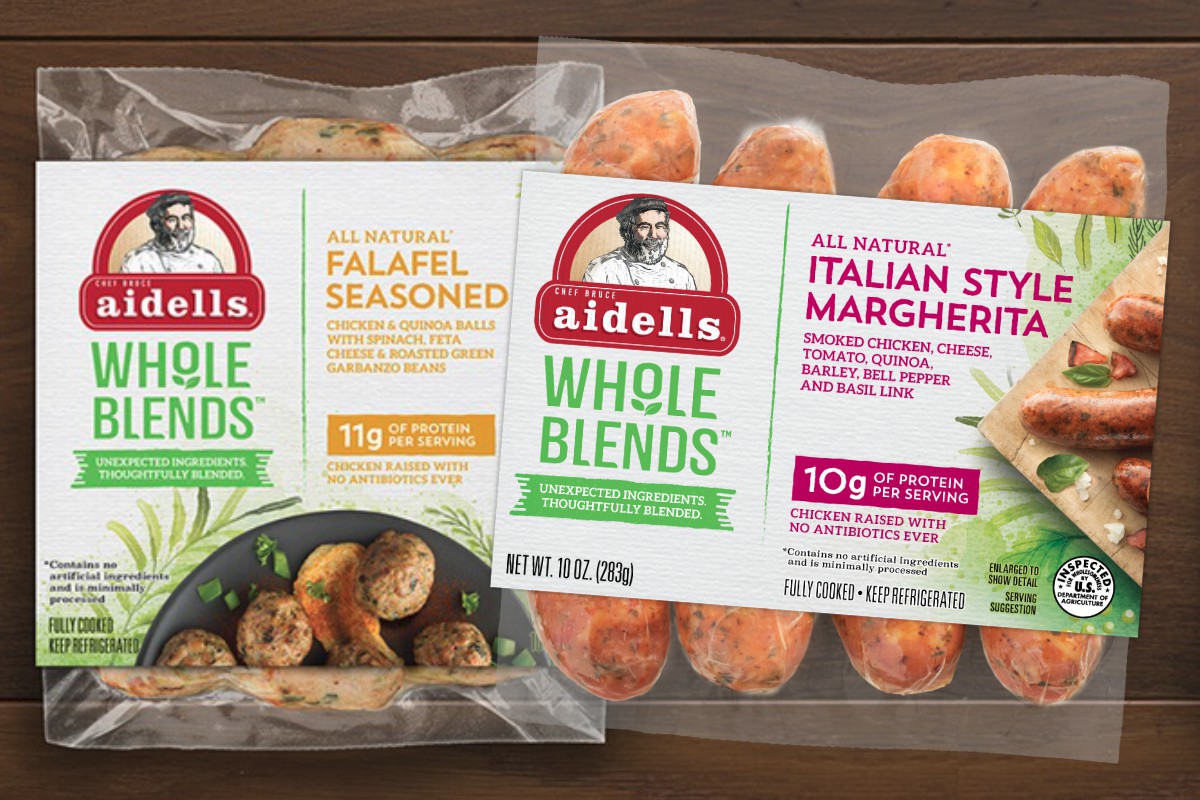 Additionally, Tyson’s existing Aidells brand is branching into the blended space with new Aidells Whole Blends sausage and meatballs, made with no-antibiotics-ever chicken and a blend of plant-based ingredients.

"For us, this is about 'and' — not 'or.' We remain firmly committed to our growing traditional meat business and expect to be a market leader in alternative protein." — Noel White, Tyson Foods

Tyson expects to introduce additional alternative protein products under the Raised & Rooted brand as well as the company’s portfolio of established brands in the future, Tyson said. This will include retail sales channels as well as food service operators.

“While most Americans still choose meat as their primary source of protein, interest in plant and blended proteins is growing significantly,” said Noelle O’Mara, chief marketing officer for Tyson. “These products appeal to a broad cross section of consumers who enjoy food from a variety of protein sources, and we expect interest to continue to grow across protein types. The Raised & Rooted launch and our pipeline of innovation will reflect our consumers’ expectations for 100 percent plant-based, blended and traditional protein offerings.”

While the new Raised & Rooted and Aidells Whole Blends products are Tyson’s first plant-based and blended innovations, the company has been investing in alternative proteins for nearly three years. In October 2016, the company acquired a 5 percent stake in Beyond Meat, and a year later, Tyson raised its ownership stake. Through its venture capital fund Tyson Ventures, the company sold its 6.52 percent share in the meat substitute manufacturer in April after announcing it intended to compete in the alternative protein space.

The news of Tyson’s plant-based and blended products comes on the heels of Perdue Farms’ June 12 launch of chicken nuggets and patties that contain a blend of chicken and vegetables.