We use cookies to provide you with a better experience. By continuing to browse the site you are agreeing to our use of cookies in accordance with our Cookie Policy.
Home » Fischer’s Meat Market blends craftsmanship with kindness

This past March, on the first day of his company’s 93rd year in business, Steven Fisher spoke with zeal about its past, present and future. The operator of Fischer’s Meat Market in Muenster, Texas, was open, straightforward and excited about opportunities ahead.

“I guess you could say we were handed a silver spoon when my wife Penny and I took over the family business in 2005,” he reflects. “It was built right, with the right equipment, the correct layout and everything was designed for efficiency and worked right.”

Fisher has a way of understating. The plant was so well designed that the Texas Dept. of Agriculture actually made a film of the facility as a model that taught not only layout for optimum product flow, but separation of product operations that all lent to greater sanitation and food safety. At the time, it was the blueprint of what Texas meat inspection officials wanted to see when they came to conduct a total plant inspection.

Fischer’s Meat Market is in its third location since its founding on March 17, 1927. The 28,000-sq.-ft. operation, occupying the space that was formerly a Chevrolet dealership, features a kill area, processing rooms, a sausage kitchen and a full grocery store. The retail store features a 24-ft. meat service case, another 16 ft. of self-service meats, and a third 36-ft. case featuring the firm’s specialty smoked meats and cheeses. The company is in the process of adding a 16,000-sq.-ft. facility on the same site.

“We are building it for higher-level production with more modern equipment,” Fisher explains. “We hope to be able to greatly increase manufacturing specialty products.” 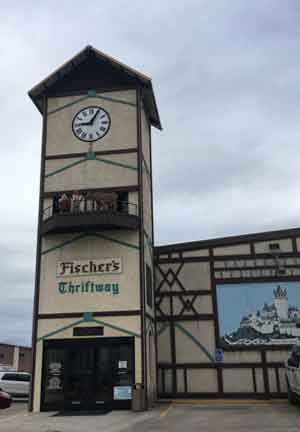 The company was founded in oil country about 60 miles northwest of Dallas by German immigrants. Seeing the need for fresh and cured meats in the town, which has grown to a population of 1,600, Fischer brothers Joe and John, opened a small butcher shop and grocery store. Their staples were German sausages and fresh meats.

Within a few years, the great Dust Bowl wreaked havoc on the area, but the brothers persevered, returned to prosperity, and built a modern facility they turned over to John’s sons in 1975. The upgraded plant was also a model facility that was even featured in a presentation by engineer/architect Bob Bowlin at a national convention of the American Association of Meat Processors shortly after it opened. Bowlin, now in his 80s, is also responsible for designing the newest facility.

Fisher’s mother insisted that to better reflect the Bavarian heritage of the family business, it should have a glockenspiel. Bowlin also designed the 45-ft. tower which, on the hour, plays German celebration percussion music, bells ring and its upper doors open to a parade of seven traditional figures including a milkmaid, cow, fraulein, dancers, a bear and a king. Oh, and of course leading the parade is a sausage-maker donning lederhosen.

Completed in 1998, the glockenspiel is a tourist draw in this Bavarian-style community. It is the only one of its kind in Texas, and for many years was one of only four or five in the US.

Ironically, with the outbreak of war with Germany, the Fischer family changed the family name to Fisher to avoid creating ill will in the area, but with the latest plant remodel, the company name returned to its original Fischer spelling.

One thing that has not changed is the company’s original German sausage recipes. There are over 30 varieties of fresh and smoked sausage that utilize the same family secret spices. Over the years products like summer sausage have also included flavorings like cheese and jalapeño.

“We used to make 400 lbs. of summer sausage at a time and when we tried the cheese and jalapeño version it was only 25 lbs. in a batch,” Fisher notes. “Now we are about 400 lbs. for both varieties.”

Fischer’s Meat Market has grown to over 80 employees, including at least 20 meat cutters and butchers.

The family also raises its own cattle and operates a feedlot where 30 to 80 cattle are finished at a time. The company obtains cattle from local producers, but for price and efficiency considerations also purchases packer-supplied beef and hogs as well.

Fischer’s is one of the most popular facilities for farmers and ranchers who want their livestock slaughtered and processed. They are also very cost conscious of every service they provide. For example, on order sheets, there is an upcharge for getting rid of inedible product, double wrapping, a per-pound further processing fee, deboning cuts and even smaller package sizes.

Sportsmen flock to the big game animal shop during hunting season. The firm takes hide-on or skinned deer and elk carcasses and even boneless meats for processing into value-added sausage and snack items. They do an estimated 1,100 carcasses a year.

In addition, they will make custom product to the specifications of a customer’s own recipe. Most of their services are featured on their website fischersmeatmarket.com. They ship meats and cheese orders as far away as Alaska. 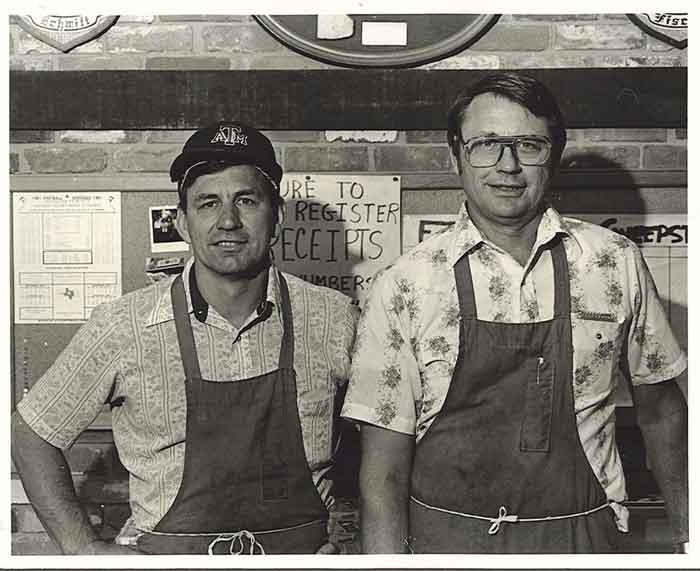 They also offer party platters and gift boxes with their summer sausage and smoked cheeses for the holiday seasons.

All in the family

Fisher, 53, gets great support from not only his wife, brother and daughter, but also from two other daughters who pitch in during busy times.

His biggest concern has for years been over-regulation of the business. “You always want your children to someday take over the business, but you don’t want them constantly subjected to so much on the regulatory front that they find it is not as much fun as it should be, making great products and running a family business.

“All small family operated businesses are a lot alike in many ways. They have to find their niche, do what works best for them and always be on the lookout for things or new products, or ways to make them, that holds promise. Our thing is our German heritage and traditional products made the way customers expect them to be. We sell groceries, wines and beers as well. But what we have done as a family for the past 92 years makes it special for us. Every processor has to find something unique that they make or the way they make it. Sausage has been and continues to be our mainstay.”

Steven Fisher won’t deny he was handed a silver spoon of a plant. But what makes him and his family so special is that he’s turned that spoon into pure gold by combining German craftsmanship and Texas hospitality.