We use cookies to provide you with a better experience. By continuing to browse the site you are agreeing to our use of cookies in accordance with our Cookie Policy.
Home » George’s Robert Garlington awarded for operations excellence

KANSAS CITY, Mo. – Robert Garlington, a 34-year veteran of the poultry processing industry and senior vice president of operations with Springdale, Arkansas-based George’s Inc., is the recipient of MEAT+POULTRY’s 2019 Operations Executive of the Year award. For each of the past eight years, the MEAT+POULTRY publishing team has solicited nominations for the annual award from its database of processors and suppliers to recognize operations executives in the industry whose careers have been dedicated to the pursuit of operational excellence and leaders who have a track record of delivering innovative solutions. Garlington’s career, which started in 1985, just three days after he graduated from college, is the focus of MEAT+POULTRY’s cover story in the upcoming July issue. Editor Joel Crews recently presented Garlington with the award at the George’s headquarters.

The hard and soft skills Garlington learned growing up and working on his family’s East Texas farm and later, when he earned a degree in agricultural education from Stephen F. Austin State Univ., served him well in an unrelated field that started much sooner than he planned. He grew up learning the values of honesty, integrity and a strong work ethic from his parents, and he says, “a college degree was a must,” according to them. 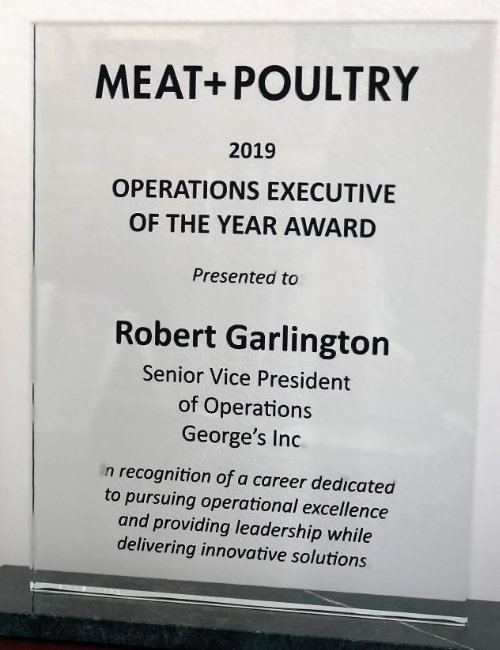 He had tentatively planned to follow the career paths of his parents and his two older sisters, who all worked in education. However, after graduating from college in 1985, Garlington hoped to take some time to reassess his future and consider other careers. His mother had other ideas and within days of her son’s graduation had applied for a job on his behalf at the Pilgrim’s Pride poultry processing plant in Lufkin, Texas. “You have an interview Tuesday morning,” he recalls her saying. After the interview he started work the very next day as a QA supervisor on the night shift, a role he says he knew nothing about. Thanks to his commitment to learning all he could as quickly as possible Garlington went on to work in nearly every position in the Lufkin plant, including live hanging, and advanced through the ranks with Pilgrim’s. He later went to work for Hudson Foods in the early 1990s before rejoining Pilgrim’s Pride for several years. Garlington joined George’s in 2014 as vice president of operations, overseeing production and processing of the family-owned company’s facilities in Arkansas and Missouri. Since then he’s been promoted to senior vice president and is also responsible for George’s Virginia-based operations as well as the Ozark Mountain Poultry facilities, which it acquired in 2018. In total, Garlington is responsible for George’s seven poultry production facilities across four states.

Garlington admits he has benefitted and grown in his career thanks to the inspiration and teaching from his previous bosses in addition to learning from the people working on the front lines. He says it is the hourly workers and the supervisors in the plants that hold much of the knowledge operations executives need to succeed. “To me, they are the experts. It’s like if I have a heart problem,” he says, “I’m not going to go to a general doctor, I’m going to go to a heart specialist.”