The 2019 Power of Meat study steps away from meat case marketing strategies to examine cultural forces that are shaping consumer shopping behaviors, and perceptions and attitudes about meat.

The most-recent study includes 11 new topics aimed at helping food manufacturers and retailers to better understand the role of meat and poultry in US food culture. The survey was conducted between Dec. 5 and Dec. 11, 2018, among a national sample of 1,500 US consumers. The margin of error associated with the survey is 2.5 percent at the 95 percent confidence level.

The annual survey was conducted by San Antonio-based 210 Analytics LLC and commissioned jointly by the North American Meat Institute (NAMI) and the Food Marketing Institute (FMI) with sponsorship by Sealed Air’s Cryovac Food Packaging Division. As part of a presentation of the Power of Meat findings, which kicked off the 2019 Meat Conference in Dallas, March 3-5, Anne-Marie Roerink, principal of 210 Analytics, shared consumer testimonial videos to elaborate on the survey findings.

“What became very clear right from the bat was that this was a very different kind of year,” Roerink said. “We have 13 years of a trendline, and more of a tactical focus – meat case versus counter, and what should go on-pack…can we look a little bit more at the world around us? Because the world around us is changing; food culture is changing.”

Eighty-six percent of consumers eat meat, according to the Power of Meat study, and Roerink believes the industry doesn’t talk enough about that fact. “There’s a lot of discussion in the media going on about plant-based eating,” she said, “but the vast, vast majority of people classify themselves as meat eaters. Let’s be talking about that.”

Meanwhile, the combined share of shoppers identifying as vegetarian or vegan has remained steady at roughly 5 percent. It’s important to note, however, that health was the top reason given for following a vegetarian or vegan diet among 56 percent of respondents. Other important reasons given included wanting to avoid antibiotics, hormones and chemicals and associating meat with major illnesses.

That’s where flexitarians – which the Power of Meat defines as eating a mostly vegetarian diet but occasionally eating meat – loom large in the meat and poultry consumption picture, with 10 percent of respondents identifying as flexitarian.

A growing number of consumers in the younger demographics are adopting a flexitarian lifestyle. Thirteen percent of Generation Z consumers reported following a flexitarian diet versus just 6 percent of older boomers, according to the Power of Meat. “Millennials and Gen X each average 10 percent. Women, at 15 percent, are also more likely to be flexitarians than men, at 6 percent,” the study said.

While reducing their meat consumption is important, flexitarians are very interested in production claims and are very concerned about animal welfare and the impact of agriculture on the environment. Roerink said these topics are a great avenue to conversations with consumers about initiatives launched in the meat and poultry industry that address these issues and concerns.

“If I had to put it in political terms, I’d have to say these are our ‘swing voters,’” Roerink said. “These are folks that are attracted by a plant-based lifestyle, but they still want to include meat into their diet a little bit. So, let’s make sure we talk to them about everything good about meat and poultry to make sure we move them more to our camp rather than going off to the vegan/vegetarian lifestyle.”

Clues to increasing consumption of meat and poultry can be found in consumers’ sources for meal inspiration. Most respondents (74 percent) in the Power of Meat cited routine meals, those go-to recipes that get a familiar dish on the table fast, as the main source for inspiration.

“I think our challenge there is how do we make routine into something a little bit more exciting,” Roerink said.

Inspiration is everywhere – family/friends came next at 47 percent of respondents; recipe websites (39 percent); cookbooks (32 percent) and TV shows (31 percent) rounded out the top five sources of meal inspiration for survey respondents. But generational differences were significant when inspiration came from social media platforms.

“One-quarter of the total population use two to four social media platforms,” according to the Power of Meat. “Among Gen Z, 42 percent use two to four platforms versus just 8 percent among boomers. Younger shoppers are also more likely to draw inspiration from family and friends. With a high likelihood of younger children, kid-focused recipes could be a promising angle.”

Roerink said shoppers who use multiple social media platforms as inspiration for meal planning cooked and shopped very differently compared to shoppers who used other sources for inspiration. She said, “A lot of them were already involved in online shopping, for instance. They had a higher interest in branded items.”

But they’re also very socially and environmentally conscious, and “…engaged with animal welfare,” she added. “More than anything, they are more likely to buy meat one meal at a time.”

“Unless their behavior changes, this may point to a growing movement away from fresh in future years, as Gen Z and millennial spending power and household sizes will increase, while baby boomer spending is declining,” according to the Power of Meat study. “Enhanced knowledge and skills may draw these shoppers into fresh more frequently.”

When it comes to types of meat consumers buy, beef and chicken dominate sales in the meat department. Also, fresh is first when it comes to meat and poultry served in home-cooked meals, according to the Power of Meat, with 68 percent of survey respondents saying they use “mostly just fresh meat/poultry that requires being cooked.” The two youngest groups – Gen Z and younger millennials – were most likely to serve mostly meat and poultry that is fully cooked at 12 percent and 13 percent, respectively.

“Making sure the store gets those subsequent day meat/poultry purchases, whether fresh, frozen or fully cooked, is crucial,” according to the Power of Meat. “Additionally, this plays into the need for portion size variety.”

Additionally, the meat case isn’t the only place in the store to engage shoppers about their meat purchases, Roerink noted. “People are shopping more and more for meat across the store,” she explained, “from the meat case to frozen, from the meat counter to fully cooked and deli.

“It’s very important, in my mind that we stop thinking of just the meat department and start thinking from the occasion backwards, because that’s how we can be of greatest help to the consumer rather than having our very distinct departmental lines.” 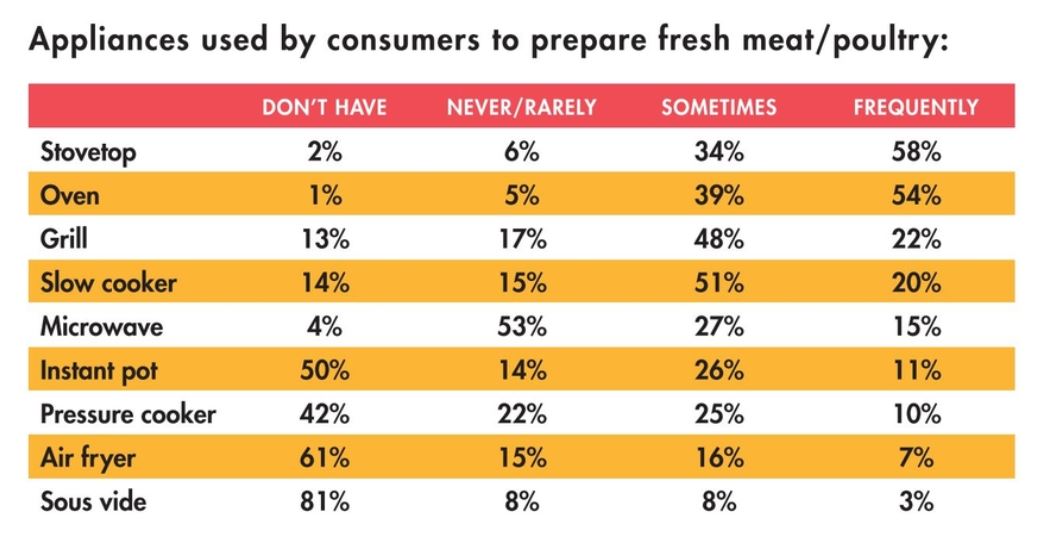 Another significant trend driving changes in consumers’ meat buying habits highlighted in the study is the incursion of technology into consumers’ kitchens. New cooking technologies such as the Instant Pot and air fryers have taken hold in consumer kitchens, although the stovetop and oven remain the appliances of choice for the preparation of meat and poultry. “If owned, 74 percent of consumers sometimes or frequently use their Instant Pots to prepare meat/poultry and 59 percent use their air fryer to do so,” the study stated.

These trends can provide processors and retailers clues to marketing strategies that deepen consumer engagement at the meat case and increase meat and poultry consumption, according to Roerink. Industry stakeholders need to ask themselves how to combine new cooking technologies with in-house product development and recipe innovations.

“How can we use that…to change our merchandising and our marketing?” Roerink asked. “Because keep in mind, these are new ways in which people are creating new routines and new favorites. We can be in on the ground floor of these routines. We can, as brands and as retailers, become part of a new routine.”

Cooking technology has enabled consumers to develop new routines around meal prep, but the Internet and e-commerce have gifted consumers with new channels through which to source ingredients such as meat and poultry. From online food subscription services to grocery-bought meal kits, the supermarket is no longer the sole domain of meat and poultry purchases.

Online purchases of groceries are growing, although less than one percent of shoppers identified online as their primary channel to buy groceries and even fewer said they buy meat online.

“About four in 10 shoppers (39 percent) have purchased groceries online in the past year, including click-and-collect, home delivery, online-only retailers or online ordering with a brick-and-mortar store,” according to the study.

Selection control was cited as the most common reason shoppers gave for buying meat and poultry at the supermarket.

Thirty-four percent of consumers surveyed said they bought a meal kit at a retail location in the past year, while 13 percent said they ordered a meal kit, Roerink said. “Just like the meat department and produce are incredibly crucial to the store choice, meat is crucial to the repurchase as well,” she explained, and this was the case no matter if the meal kit was purchased at a grocery store or online.

And, based on their experience, 82 percent of consumers surveyed said the meat quality was good and about three-fourths of shoppers said meal kits provide good value for the money. Finally, meal kits check off a lot boxes next to attributes that younger consumers, especially, find attractive – convenience, variety and adventure.

“Prompting the trial of new cuts and kinds – the delivery kits do a little bit better at that than retail kits,” Roerink said. “I think that makes sense. We tend to be a little bit on the safe side in the retail kits in terms of the meat that we merchandise in them, but if you look at the number of people that are willing to try something new, keep their recipes and make it again, I think the experimentation there can really help gain in the long-term because the step-by-step instructions take away that trial barrier and prompt people to buy meats that they didn’t buy before in the years thereafter.”

You are what you eat

Increasingly, consumers are associating meat production attributes to their own health, according to the Power of Meat.

“In particular, organic, all natural and hormone-free are seen being more of a consumer benefit than it being better for the animal,” according to the study. “Sustainable, vegetarian-fed and organic raising practices draw the highest shares of consumers who see benefits for neither the livestock nor the consumer, at 22 percent, 20 percent and 15 percent, respectively.”

Grass-fed production claims were of interest to a majority of consumers (54 percent), followed by all-natural, antibiotic-free, hormone-free or no added hormones, according to the survey. Interestingly, in one of the consumer testimonial videos Roerink shared with the audience, consumers emphatically answered “grass” when asked what cattle are fed during beef production.

“The growing consumer interest in how, where and by whom their food is made and their effect on the meat purchase is clear,” the study said. “While cited interest was not subject to price differentials typically seen when compared with conventional counterparts, more than half of shoppers want more grass-fed, natural, antibiotic-free and hormone-free items.”