We use cookies to provide you with a better experience. By continuing to browse the site you are agreeing to our use of cookies in accordance with our Cookie Policy.
Home » Meat, poultry market outlook remains positive

DALLAS – In Annual Meat Conference tradition, the second day of the conference opened with a “Market Outlook” presentation on the state of the poultry, beef and pork industries presented by Paul Aho, economist and consultant for the Poultry Perspective, Randy Blach, CEO of Cattlefax, and Steve Meyer, economist for Kerns & Associates. The trio, described as the ZZ-Top of the meat and poultry industry, presented their “state of the market” to a packed ballroom at the Hilton Anatole in Dallas March 4. 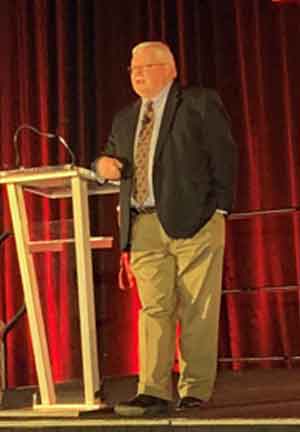 With excessive amounts of rain and snow throughout the country, Aho reported a low concern for drought this year. There were 89 million acres of corn in 2018 and 93 million expected in 2019. “We’re going to have plenty of corn this year,” Aho said.

“We have enough grains to keep the prices near where they are for the foreseeable future,” Meyer agreed.

Overall, it was not the best year for the poultry industry, according to Aho. Chickens were barely profitable and turkey profitability was slowly improving. The egg industry profits were also slowly recovering.

Seven new poultry plants are expected to come online this year. Each plant will account for a 1 percent increase in poultry production. However, those production numbers will be spread out between 2019, 2020 and 2021, Aho said. In addition, many of the companies are trying to use their additional facilities to help reduce Saturday production which will result in less production increase overall. The poultry industry overall is expecting 2 percent more broilers this year.

Poultry has been beating red meat in consumption for the last four years, however, red meat looks to take over poultry this year, Aho said. “When the economy is at its peak, when consumers have lots of money in their pocket, that’s when they move to beef and pork,” Aho explained. “Now watch what happens when the recession starts – that’s when they’ll come back to poultry.”

The beef industry is expecting record production in 2019, 2020 and 2021, Blach said. “Our industry is hitting on all cylinders and we’re running at full capacity in the beef industry,” he said. Beef consumption will be near 57 lbs. per capita over the next few years.

“We must continue to respond to changing consumer demands for higher quality beef product,” Blach said. “We didn’t do a good job of listening to our consumers in the 80s and 90s and we lost 50 percent of our market back then.”

The potential for an upcoming recession remains a threat to the beef market. “The beef market is more vulnerable if the economy slows down and heads into a recession – historically that has been the case,” Blach said.

The biggest factor affecting the pork industry, according to Meyer, is the African Swine Fever (ASF) epidemic in China. The Chinese eat 88 lbs. of pork a year, 18 lbs. of chicken and 10 lbs. of beef a year. Half of the world’s pigs are in China. There is a very dense pig population in China on millions of farms throughout the country.

It’s estimated that China has lost 6 million breeding animals already, Meyer said. That’s the same size as the US herd.

“ASF is the most feared disease in agriculture. It’s not highly contagious but highly transmissible. It has a high mortality rate (90 percent or more) and there’s no vaccine. Even though there is no human health risk, pigs are at high risk and so is the pork industry,” Meyer said.

While the disease is still only being found in China, there is a concern throughout the pork industry that the disease will move to additional locations. “If ASF comes to the US, the US exports will be blocked the next day and 23 percent of our production that used to be exported would be staying here. That would reflect in a 70 percent decline in prices immediately,” Meyer said. “It’s a big concern that the US pork industry needs to keep in mind and be aware of.”