We use cookies to provide you with a better experience. By continuing to browse the site you are agreeing to our use of cookies in accordance with our Cookie Policy.
Home » Culinary Fight Club develops savory chocolate entrees

The Culinary Fight Club, a national food sport organization that produces live cooking competitions to highlight local culinary talent, ingredients and resources, hosted the 2019 Savory Chocolate Challenge in Chicago on Feb. 11. Four chefs created savory entrees featuring chocolate — any type in any format — along with two other required ingredients: cayenne pepper and Sam Adams beer, a competition sponsor. They prepared their dishes in a high-energy kitchen environment with a time crunch, starting with a 45-second pantry race to source ingredients and then 60 minutes to plate the perfect dish to be judged on innovative use of chocolate, appearance, presentation, and of course, taste.

The chefs were allowed to bring three uncooked, un-prepped ingredients in commercially sealed and labeled packages. One item they all brought was the protein; however, bacon, chicken breasts and ground beef were available during the pantry race.

Chef Greg Gaardbo, owner of Chicago Culinary Kitchen, was the People’s Choice winner with salt and pepper grilled duck breast accompanied by heirloom carrots sautéed in vegetable oil and sugar (for caramelization) and sprinkled with dark cocoa. The entrée was served with a dark and milk chocolate beer fondue for dipping.

Paul Caravelli, chef du cuisine at The Stained Glass, served up a rack of lamb with varied chocolate-based sides. The chops were garnished with cocoa nibs. 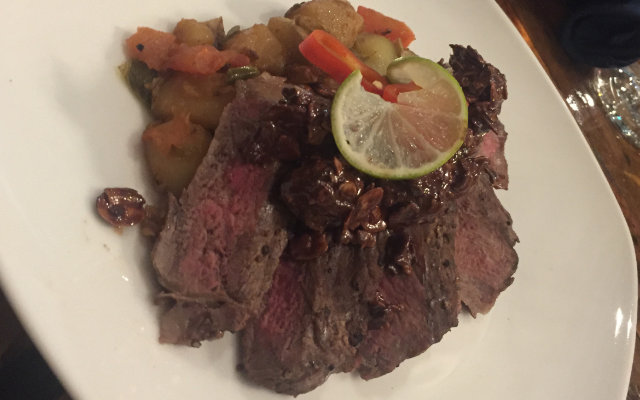 The competition winner was Chef Joelle Brown of Nola Nights Southern Aromas. She brought in chocolate pasta and scallops, both of which were cooked in the Sam Adams. The entrée was topped with various vegetable garnishes along with a Mexican chocolate creole sauce.