We use cookies to provide you with a better experience. By continuing to browse the site you are agreeing to our use of cookies in accordance with our Cookie Policy.
Home » Robotics brings high-tech, soft touch to food processing

Innovations often come from unexpected places and circumstances. In 2008-2009 the Defense Advanced Research Projects Agency (DARPA) issued a challenge to roboticists. DARPA wanted roboticists to create a robot that could motivate itself to a door, get under the door and motivate itself away. This challenge led to a new field called soft robotics from a chemistry lab, not robotics or engineering, at Harvard Univ. with a pipeline that led to solutions for labor shortages in the food manufacturing industry.

The traditional roboticists tried to build a transformer-type robot. It would motivate itself to the door, then by way of linkages break itself down low enough to get under the door. None of these approaches succeeded.

“But the chemistry department at Harvard Univ. also got an award,” says Carl Vause, CEO of Soft Robotics, Bedford, Massachusetts. “They were not roboticists, they were chemists. So, they had polymer science, they had fluidic knowledge and they said, ‘Look an octopus can do this. It could walk up to a door and skinny itself under, so let’s build a robotic octopus.’”

The new field of soft robotics created in the Harvard Univ. chemistry lab, and led by George Whitesides, Ph.D., specialized in building robotic structures out of soft, non-rigid materials. The chemists from Harvard used fluid actuation, pneumatics and hydraulics on off-the-shelf polymers to build the only robot that succeeded in moving up to the door, crawling under it and moving away.

The team of Harvard chemists continued to work on the technology and Whitesides, through experience creating biotech and pharmaceutical companies, began to network with his contacts in the “hard products” industry. A friend of a friend reached out to Vause, whose experience with product development includes working with 3M and a medical device company, to suggest a meeting with Whitesides to discuss the new technology. After Vause and Whitesides met, Vause was intrigued by the way the robot interacted with its environment and the effect that interaction might have on solving a problem the robotics community had always dealt with: developing a robot to pick up fragile items that vary in weight and size.

“This has been a huge problem because traditionally robots have been very task oriented and if you want them to do something different or there’s a slight variation in the object, there’s a lot of programming, a lot of downtime, sometimes some redesign that has to take place,” Vause says. “When you look at what we call low structure and unstructured [variables within the environment changing in real time such as size and shape of objects to be picked up] environments, robots haven’t been able to work in that environment because they do task A, do task A, do task A.”

“We can handle pork chops, we can handle fish, we can handle drumsticks, bone-in breast, wings, those traditionally really difficult items to pick and package.” — Carl Vause, CEO of Soft Robotics

Vause saw the potential the technology had to enable robots to adapt to and work in lower and unstructured environments. Vause and his team licensed the technology from Harvard, established the company, Soft Robotics, in the summer of 2013, and worked to get the technology to market. Once there, the company began getting calls from food companies looking for solutions to labor shortages, particularly in packaging.

“They [food companies] said, we’re either in a refrigerated or freezer environment, we have objects, whether they’re tomatoes, or cuts of beef or chicken drumsticks, they’re easily damaged, they’re all different sizes and weights, and we need to make sure that we can get this product packaged. We’ve tried robots, but robots just couldn’t handle our product,” Vause says.

A big part of Soft Robotics’ potential in the industry lies in its compliance with the code of federal regulations (CFR) of the US Govt. for Food Contact Packaging, its certification with the Japanese FDA and its certification for direct food contact in the European Union (EU). The certifications allow possible increases in sanitation because human hands have touched the food one less time.

The Good Manufacturing Practice (GMP) certification for the EU requires a full and auditable supply chain for the materials used in the Soft Robotics technology. How the materials were manufactured and the steps of manufacture from beginning through to the customer ensure no contaminants or adulterants have been introduced.

Soft Robotics started in the food industry with its first applications in the bakery segment in April of 2016. The technology handles finished and frozen baked product and raw dough. Then in 2017 it began to work with a company on packaging raw chicken drumsticks.

“That’s kind of taken off to the point where now we’re doing fresh and frozen beef,” Vause says. “We can handle pork chops, we can handle fish, we can handle drumsticks, bone-in breast, wings, those traditionally really difficult items to pick and package.”

As with any new technology applied to business, companies need to know that return on investment (ROI) will not only exist but increase the bottom line enough to warrant the time and resources necessary to implement the new technology.

“The most important things, before we even move into someone’s production environment is what we call ‘pickability,’” Vause says. “Can the robot pick the object up? Which in some applications is very difficult, so we do a lot of work in meat and poultry for bagged product in foodservice, and those are very difficult objects to pick. We want to prove that with our technology the robots going to be able to pick those objects, so that’s pickability, then there’s how fast. In the end the return on investment is going to be based on rate. It’s parts per shift.”

Soft Robotics begins the process with an in-house study of pickability and rate. If the manufacturer opts to go ahead with the Soft Robotics technology, it can be retrofitted onto existing robots, or built from the ground up in a new line or greenfield plant. Soft Robotics engineered its technology to integrate with most food safe robots already in use. Vause says more than two hours is a long time to get an integrated robot tuned and up and running.

“So, the customer isn’t required to use one particular make or model of robot. They can use our system in just about anything they’re already using,” 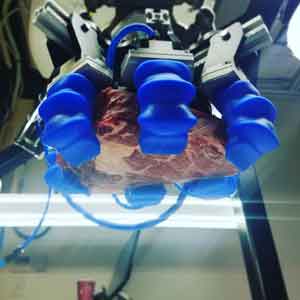 In addition to the robotic grippers, Soft Robotics offers a vision system and artificial intelligence (AI) solutions. Soft Robotics can integrate these into existing robotic systems that require those applications, as well.

“In a lot of these applications we employ vision-guided robotics,” Vause says. “Packaging off a conveyor belt we use vison-guided robotics, but it’s not an AI problem, it’s just using standard industrial cameras to identify ‘is that a drumstick, yes, pick it up, position it this way in the tray and package it.’ When we get into environments where we’re doing grocery order packaging, or we’re moving items out of a bin or a tote, like you would see in grocery delivery, or in some of the meal kits, that requires AI to do that.”

Soft Robotics is still in the pilot stages for meat and poultry packaging, but Vause and the industry believe the opportunities for applying the technology is tremendous. Currently, Soft Robotics has bakery lines running around the world handling both fresh and frozen product. Also, the company currently packages produce items such as lettuce, corn and corn on the cob, as well as confectionary items like chocolates and candies. Many of the current systems are in full deployment and have been running 24 hours a day for over two years.

Regardless of whether the item is fresh or frozen beef, chicken or pork, Vause says getting it off a conveyor and into a package is currently the best application for Soft Robotics’ technology.

“It’s a solution that can be deployed today and that’s where we’re really hearing from our customers,” Vause says. “That’s where the labor scarcity is really hitting home for them. It’s in the packaging activities. 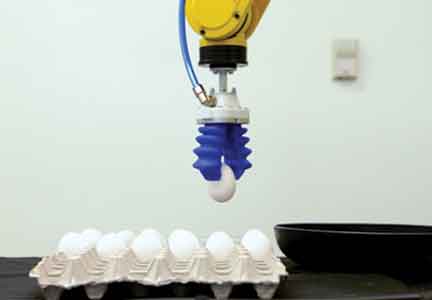 “We really see the pilot work we’re doing in beef being able to be replicated in both pork and poultry to really solve for that labor crunch in the packaging part of the process. We think there is tremendous opportunity there.”

Beyond the packaging aspect, Vause says processors have asked about the application to points earlier in the process, such as cutting and whether robots will ever perform those types of tasks. Vause agrees that worker safety advantages etc., certainly make sense, but aren’t realistic right away.

“I think it’s going to be a while before the robotics community, us included, can fully figure that one out, but I do think robotics will come to that step of the process as well,” he says.

For now, Vause and Soft Robotics will continue to focus on the area believed to be the most relevant currently, labor shortages in packaging.

“This is a solution that is available today and can be deployed into a beef or chicken packaging facility and help those customers out immediately.”