We use cookies to provide you with a better experience. By continuing to browse the site you are agreeing to our use of cookies in accordance with our Cookie Policy.
Home » Joining together for a true industry vision

Joining together for a true industry vision

About nine years ago, Phil Gatto and Rob Engelhart ran into each other at a local restaurant and coincidentally the two learned that each had come from families with food production backgrounds. Phil, co-founder and CEO of True Story Foods, and Rob president of Courage Production (True Story’s processing facility), had come to a fork in the road where the industry was changing with consolidations and they agreed there was an opportunity for them to consolidate their years of experience and love for the industry in a positive way.

“I think everybody wants to make great food, but when you go to the marketplace with some passion behind it, I think it shows through and I think consumers are looking for products coming from a company like that,” Gatto says.

True Story and Courage use the longtime supplier partnerships that Gatto and Engelhart developed and nurtured over their long careers in the industry. For True Story these relationships mean a steady supply of organic raw materials, as well as non-GMO, which are more limited, to further process into its wide range of organic, all-natural and non-GMO deli meats, organic sausages, organic hot dogs and organic fresh pork.

“Engelhart Foods was probably 60 percent a co-packing facility where you win some and you lose some and you can’t control the destiny,” Engelhart says. “That’s where Phil and I came together and developed this new brand, True Story, based on high-quality, artisan, hand-made products, basically full circle to where my grandfather started a hundred years ago.”

The passion for producing that high-quality, artisan, small batch food coupled with the opportunities Gatto and Engelhart saw in the industry led directly to True Story and Courage Production and the commitment to organic, natural and non-GMO which are leading trends in the category.

“So, finding a place and a consumer that really appreciates that and to put that passion into a place where the consumers are only growing for this product, not declining like some areas of the industry, is the reason these guys started True Story,” says Kathryn Tuttle, vice president of marketing, True Story Foods.

And according to Tuttle, True Story has found both the place and the consumers for its products.

“We have kind of a unique start in that we actually made some of our first inroads in the club channel. Some people might think it’s surprising for a higher-end organic offering, but we found it as a great opportunity to get our products in front of a lot of people within a very short time and just found it’s actually where a lot of the organic consumers are shopping,” Tuttle says. “And then over the last handful of years we’ve started to branch more into natural grocery. There’s a great consumer there, the retailers really understand us, so we love that channel.

“And now we’re seeing that even more conventional retailers are interested in products like ours. So, that’s where, those three channels, is really where the lion’s share of our business is.” 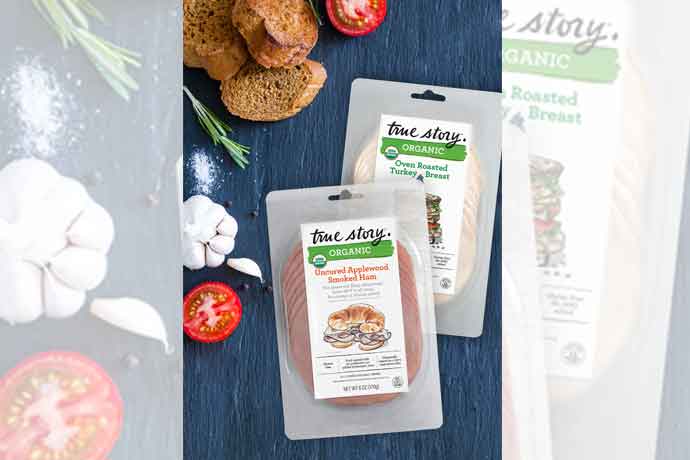 Being an early player in the natural and organic marketplace, True Story has cultivated solid relationships on the supply side, something very important to producers of natural, organic and non-GMO. True Story uses these relationships to ensure a steady supply chain, as well as partnerships with the right retailers.

“The ones that are truly committed to the offering, and who want a partner to grow the business and understand it differently,” Tuttle says. “I think we’ve now found a lot of great retailers who understand why it’s important to have these products in their store as opposed to just the conventional.”

Gatto says an abundance of organic suppliers exist but non-GMO project verified suppliers are a bit more limited. However, with its good relationships, True Story is able to offer a full line, which continues to strengthen retailer relationships and that in turn adds strength on the supply side.

“Right now, we have a full line of products that we can go in there with, which gives the store the ability to put a nice display in and give the consumers options whether they want to have sausage or a ham sandwich or a turkey sandwich,” Gatto says.

Courage Production and True Story Foods employ 165 workers to produce more than 10 million lbs. a year. Headquartered in Fairfield, California, with the marketing team in Berkeley, the Bay Area company focuses on about 30 items with a core of about 10 that sell across deli, sliced deli, hot dogs and sausages. The “relatively tight set,” as Tuttle calls it also includes a unique non-GMO bulk line of eight items.

“The lion’s share of our products that we make, over 50 percent, is in our dinner sausages and hot dogs, so that’s really our wheelhouse,” Tuttle says. “About 30 percent of our business is sliced deli meats, and then about 10 percent of our products are bulk deli meats, which is one of our newer lines. And then kind of all of the others make up a mix of some of the retail and co-pack business that we do and tend to be a small part of the True Story business.”

True Story’s “sweet spot” resides in its home area of Northern California, “…but we have retailers all the way out to Boston into the Midwest to New Jersey, so a pretty wide swath across the country,” Tuttleadds.

“We’re excited to be pushing the brand and growing significantly,” Tuttle says.

Over the next two to three years, the company plans to focus on investing in the natural channel to grow business. True Story believes the players in that space are shifting with many retailers wanting to bring on independent players.

“A lot of them are looking for somebody new to come in and be their sort of anchor kind of meat tenants,” Tuttle says. “We think we can play that role in the natural channel.

“And then we’re seeing more and more conventional retailers who are really changing their minds and becoming committed to this area. Those are the two areas that we’re really focusing on.”

Best of both worlds

“A lot on the muscle is still done by hand,” Engelhart says, “hand netted, hand spiced and naturally smoked in batch smokehouses.”

“We have a training program from the Alchemy System that emphasizes food safety and employee workplace safety. We initiated stretching in the morning, and multiple times during the day they [employees] stop and do their stretches offline just to keep all the joints moving other than standing in a location,” Gatto says.

In the early years of the company True Story focused on the quality of the products, staying true to the artisan ways of production, and getting it in front of consumers to let it speak for itself, “…but over the last year or two we have really started to go out and let folks know about the quality that we make and our unique products,” Tuttle says.