We use cookies to provide you with a better experience. By continuing to browse the site you are agreeing to our use of cookies in accordance with our Cookie Policy.
Skip To Content
Home » Organic food products resonate with millennial, Hispanic consumers

By Jeff Gelski and Joel Crews

Notable increases in the meat department included sales of organic fresh chicken, up 11 percent to $499 million during the 52 weeks leading up to Dec.1. 2018. According to “The Power of Meat 2018” study, the value of organic meat at retail is growing at a compound annual growth rate of 10 percent and 12 percent by volume. Additionally, claims of “all natural,” organic,” or “grass-fed” garner the most awareness among retail shoppers.

“Gone are the days when organic products catered to a singular or specific audience,” New York-based Nielsen said. “Today, organics have hit the mainstream. Not only are organic products boosting our industry’s top line, they are being purchased more by all generational and age cohorts. That said, some segments of our population are leaning into organic more than others.” 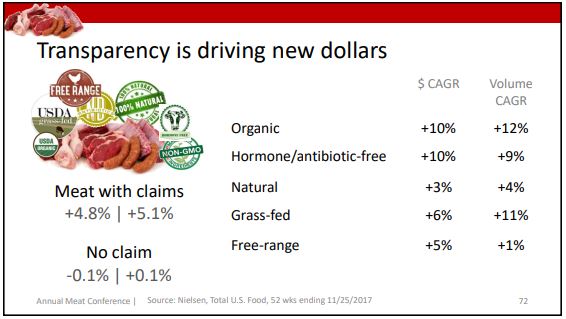 Nielsen Retail Measurement Services also collected US sales numbers for non-meat categories for the 52-week period ended Dec. 1, 2018. Double-digit sales growth was reported for kombucha, up 42 percent to $412 million and sandwich bread, up 19 percent to $466 million.