We use cookies to provide you with a better experience. By continuing to browse the site you are agreeing to our use of cookies in accordance with our Cookie Policy.
Home » FDA reports trends in antibiotic sales, distribution

WASHINGTON – Domestic sales and distribution of all medically important antibiotics for use in food-producing animals dropped 33 percent between 2016 and 2017, the US Food and Drug Administration (FDA) said in its “2017 Summary Report on Antimicrobials Sold or Distributed for Use in Food-Producing Animals.”

“The data summarized in the 2017 Sales/Distribution report is collated from estimates of antimicrobial animal drug product sales for that year provided by the drug manufacturers and can’t be substituted for actual usage data,” he said. “For example, veterinarians and animal producers may purchase antimicrobial drugs, but never actually administer them to animals, or they may administer the drugs in later years.

“The sales trends reflected by the 2017 report are very encouraging,” Gottlieb added, “and I’m pleased to see that the sales and distribution of these antimicrobial drugs has declined significantly the past two years. Although the 2017 sales/distribution data being made available today can’t be used to forecast numbers for the upcoming year, we hope that this downward trend will continue.” 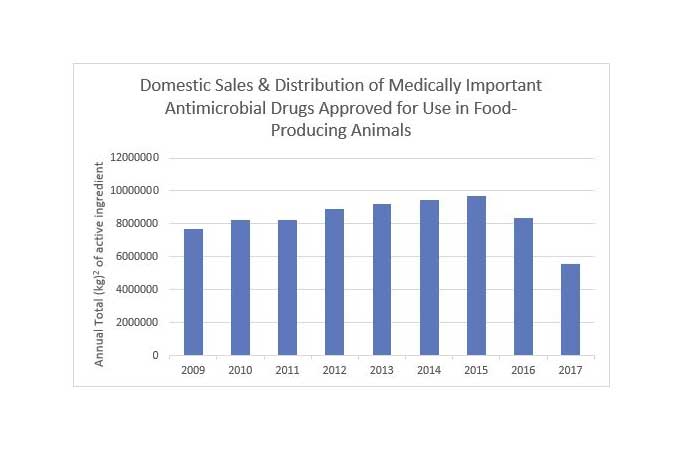 FDA credited the declines in sales and distribution of medically important antibiotics to “ongoing stewardship efforts” initiated by the agency and industry stakeholders.

“There is a broad consensus across the food animal industry that we must continue to drive and demonstrate antibiotic stewardship in animal agriculture,” said Joe Swedberg, chairman of the board of Farm Foundation. “This framework is about stakeholders coming together to do the right thing and communicate their commitment to antibiotic stewardship, with a transparent and meaningful approach.”

The core components are related to commitment and culture, veterinarian guidance and partnership, disease prevention strategies, optimal treatment approaches and record keeping. The components were established to ensure that stewardship programs are science-based, transparent and sustainable, among other attributes. The framework is the product of a two-year dialogue — moderated by The Pew Charitable Trust — among industry stakeholders.

“Antibiotic stewardship is essential to protecting human and animal health, ensuring food safety and security, and combating antibiotic resistance — issues that consumers increasingly care about when making their purchasing decisions,” said Kathy Talkington, who directs Pew’s antibiotic resistance project. “The organizations who were part of this dialogue represent the food animal supply chain from farm to table, and they recognize the need for meaningful stewardship programs that everyone can understand and trust.”