We use cookies to provide you with a better experience. By continuing to browse the site you are agreeing to our use of cookies in accordance with our Cookie Policy.
Home » Mushrooming growth at retail

Beef and mushroom blended products will soon be making their way into the frozen retail space, as Phillips Gourmet Inc., Kennett Square, Pennsylvania, a leading grower of specialty mushrooms, is making these products available for private label. Until now, the company only sold its 60 percent beef and 40 percent mushroom blend to foodservice, mainly universities and institutions.

For the past few years, culinary professionals have been exploring the inclusion of finely diced or chopped mushrooms into ground meat matrices to make lower-fat, flavorful burgers and meatballs. Referred to as “the blend” by The Mushroom Council, the umami-rich mushrooms match the texture of ground meat, and when combined, yield a product with an improved nutrition profile and delicious taste. That’s because the umami in both the meat and mushrooms provides a greater flavor impact than either on its own.

A sensory study conducted by The Culinary Institute of America and the Univ. of California, Davis, and published in September 2014 in the Journal of Food Science (79: S1795-S1804) showed that most consumers prefer the flavor, texture, spice level and salt level of the blend over 100 percent beef.

The study, “Flavor-enhancing properties of mushrooms in meat-based dishes in which sodium has been reduced and meat has been partially substituted with mushrooms,” included eight chef-developed recipes. Researchers investigated the effects of beef substitution with crimini or white mushrooms (Agaricus bisporus) on the flavor profiles of carne asada and beef taco blends. The prototypes were evaluated with a descriptive analysis panel. Sensory mitigation of sodium reduction through the incorporation of mushrooms was also investigated in the taco blends. 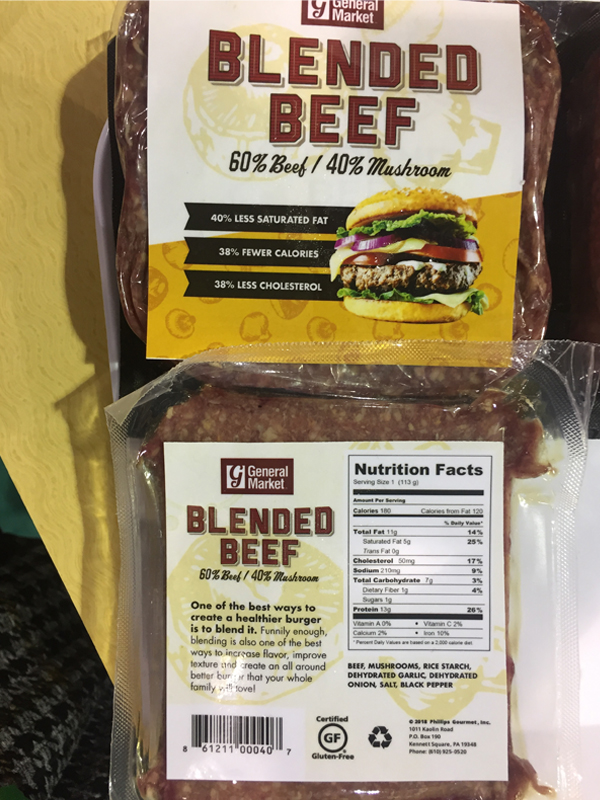 Results showed that substitution of beef with mushrooms in the carne asada did not alter the overall flavor strength of the dish, but the incorporation of 50 percent or 80 percent ground mushroom in the beef taco blend did enhance its overall flavor as well as mushroom, vegetable, onion, garlic and earthy flavors, and umami and sweet tastes. Overall flavor intensity of the 25 percent reduced-salt version of the 80 percent mushroom taco blend matched that of the full-salt versions of the 50 percent and 100 percent beef formulations, thus indicating that the substitution of 80 percent of the meat with mushrooms did mitigate the 25 percent sodium reduction in terms of the overall flavor impact of the dish, even if it did not quite compensate for the reduction in salty taste.

The new frozen product line made its debut at the Private Label Manufacturers Association (PLMA) annual trade show held Nov. 11-13 at the Rosemont Convention Center in the Chicago area, where more than 2,800 companies showcased products available for store brands. Retail buyers embraced the innovation, as many want to offer more signature items under their house brands. This is because US store-branded product sales have been reported to be growing as much as four times the rate of commercial brands, based on reports from Nielsen and others, with much of the growth coming from sales of newer and more premium product lines, according to PLMA.

A growing number of grocery retailers are turning to innovative store branded products – such as Beef Blend and Blended Burger – to attract loyal shoppers as competition heats up between brick and mortar and online retailers. Gone are the days when supermarkets offered only commodity products that imitated national brands.